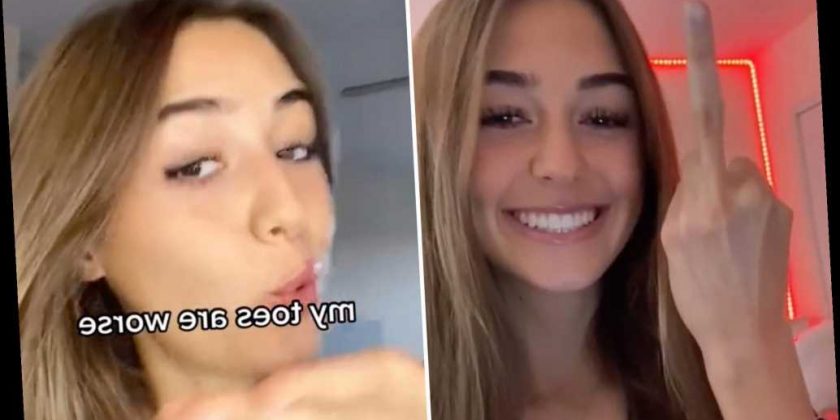 Believe it or not, TikTok has a kindness feature now

When she flips people off, it’s in all caps.

An Arizona teen is going viral due to her massive middle finger, which reportedly measures a whopping 5 inches long from knuckle to nail. A jaw-dropping clip of her flipping the “big bird” boasts 4.3 million views on TikTok.

“The reaction to my TikTok has been insane,” Olivia Mercea, 16, told Ladbible of her “ET”-esque digit. “I never thought that it would reach the level that it has.”

The humorous clip shows the aspiring model flipping viewers the bird with her king-sized middle finger while the “I don’t give a f – – k” verse from Rilès’ song “Pesetas” plays in the background.

The TikTok commentariat was awestruck at the digitally endowed teen’s display.

“The Eiffel Tower of fingers,” marveled one newfound fan at Mercea’s “Nosferatu”-evoking typer.

One social-media comedian quipped, “I can see the top of your finger from the comments.”

Another joked somewhat crudely, “u don’t even need a man with that.” (Warning: The TikTok clip below features strong language.)

Despite measuring nearly half a foot long, Mercea only realized her middle finger was unusual a couple years ago.

While initially insecure about her protrusive button pusher, the Gibbon-fingered girl eventually thought it was “pretty funny and something that would always bring out laughs,” she told Ladbible.

Mercea hopes that it will help her get a foot — er, finger — in the door of the modeling industry as the clip is reportedly making waves in fashion circles.

And that’s apparently not Mercea’s only preternaturally big digit. In a follow to the finger-flaunting clip, the TikTokker can be seen blowing the audience a kiss while the message “my toes are worse” appears on the screen.

She elaborated in the comments, writing “my toes are also very long! Whenever I drop products in the shower, I will pick them up with my toes instead of reaching over.”