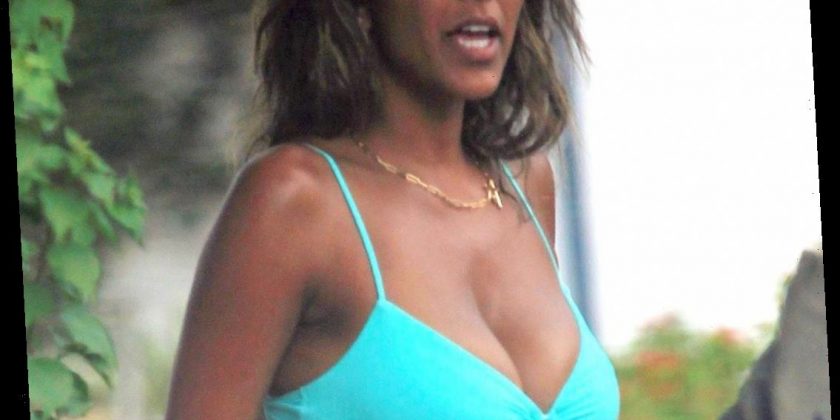 Mum's the word for Tayshia Adams, who weighs in on Clare Crawley's Bachelorette premiere during the pandemic, but doesn't address whether she'll be finding love this season.

Tayshia Adams is staying tight-lipped after The Bachelorette's season 16 premiere on Tuesday.

The 30-year-old Bachelor in Paradise alum discussed the new season on the Click Bait podcast, out Thursday, Oct. 15, but was really quite coy. Ultimately, she didn't address the well-known rumors that she replaces Clare Crawley, who exits the show after finding true love with contestant Dale Moss.

Tayshia instead reflected on how the season is playing out during the COVID-19 pandemic. She said, "I thought it was so interesting how many people and how many times they referenced like, ‘This is the first time I hugged somebody in, like, six months or, like, holding hands even,' you know what I mean?"

The reality star continued, "That's just the way of the world lately, and I couldn't imagine having that much freedom, because we've been having to put masks on every single day. So to be able to, like, walk around and date and kiss and hold and do all that stuff without a mask is kind of bizarre."

After The Bachelorette shut down production due to the coronavirus, the ABC dating show returned for filming in July in Palm Springs. But the twist didn't end there—sources told E! News that Clare found her match early on amongst 42 contestants, and then the 39-year-old was replaced by Tayshia for the rest of the season.

Clare opened up about the unorthodox experience on Jimmy Kimmel Live! on Tuesday, Oct. 13.

"I Googled all of the men that were going to be on the season," the hairstylist revealed. "Took lots of notes."

The Aftermath of Kendall & Kylie Jenner's Fight Is Crazy Dramatic

However, she claims she didn't have her mind fully made up. "I wouldn't say that it was a hard yes or a hard no, but there were definitely things that I saw that were red flags," Clare said. "I'm, for example, not a drinker at all. And some of the guys were boozing it up, partying, doing backflips off of boats and I was like, 'Is that my husband? Probably not.'"

So was Dale the one for her? "Being able to look him up, there was just a lot of the things that aligned with what I'm looking for that he kind of embodied," she admitted. "So yeah, there were a lot of things."

When Clare met Dale for the first time, she felt like he took her breath away. She gushed, "I definitely feel like I just met my husband. I'm shaking!" Certainly seems more promising than her ex-fiancé Benoît Beauséjour-Savard, who wasn't even mentioned on the Bachelorette premiere.

As for dreamy Dale, he attended South Dakota State University before taking on a career in the NFL. The 32-year-old also hosted a podcast The Game Plan with Dale Moss, and now he's signed with EWG Management as a model. So it's safe to say he's not a one-trick pony.

What else is there to know about this season of The Bachelorette so far? Well, Tyler Cottrill accused Yosef Aborady of being unfaithful to Clare on the very first night, and all around it's looking very un-Clare.

Tune in on Tuesdays on ABC.