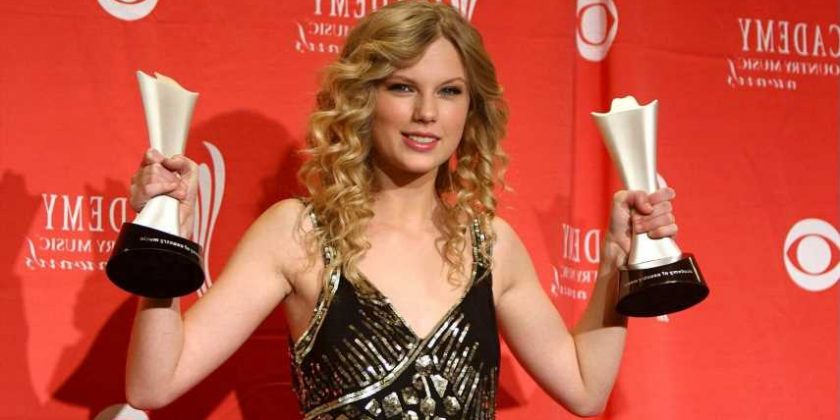 Taylor Swift found success after releasing her first single for her self-titled debut album. From then on, her career has only soared with every album she released. With over nine studio albums and one re-recorded album under her belt, Swift has expanded her portfolio with different genres of music. She started as a country artist and released a pop album titled 1989 in 2014. Her surprise 2020 albums Folklore and Evermore explored the alternative rock genre and went on to garner great success.

Her hit albums and fast-selling records paved the way for Swift to make new records and break a few. She overtook some of the most prominent artists of all time to claim the records. Her record streak began from her second studio album Fearless which was the biggest album in 2008. From achieving an astonishing number of singles on the Billboard to recording-breaking digital streams, let’s take a look at the ten Guinness world records that Taylor Swift managed to bag.

Taylor Swift released Lover, her seventh studio album, in 2019, which was the biggest-selling album by a solo artist. The album sold 3.2 million copies in the first week of release, with over 800,000 units in the USA, 53,000 in the UK, and the rest from other countries. As mentioned by Guinness World Records, her album was the first-ever international album to reach 1 million units in the first week in China.

RELATED: Shake It Off: Taylor Swift & Six Other Celebs Who Finally Joined TikTok In 2021

In 2010 with her album Speak Now, Swift dethroned Mariah Carey to become the only artist to have seven of her album songs enter the Billboard Hot 100 chart. Her chart-topping singles from Fearless as well as Speak Now were listed on Billboard. Her hit songs were Mine, Fearless, Jump Then Fall, Today Was A Fairytale, Back To December, Jump, and Speak Now.

Having one of the most successful musical careers, Taylor Swift has managed to win a record number of American Music Awards. She has collected 29 AMAs, a record she broke in 2019 when she won six trophies and dethroned Michael Jackson’s 26. She also won ‘Artist Of The Decade’ in 2019 for her exceptional music career.

7 Most Viewed VEVO Video In 24 Hours

Taylor Swift’s much-awaited seventh studio album, Lover, released its first single, ME!, featuring Brendon Urie from Panic! At The Disco as an aesthetic masterpiece with a strong splash of colors and choreography. A contrast from her previous album Reputation, her video gained 62.5 million views on YouTube.

Swift also holds the record as the first female artist with the fastest-selling digital album in the USA. Since her third studio album Speak Now in 2010, Swift has held the record that has 278,000 digital downloads. Her album includes classic hits like Mine, Back To December, and The Story Of Us.

Her chart-topping albums received the biggest feat when they earned her Grammys for Album Of The Year category. According to Insider, Swift tied the record with Paul Simon and Stevie Wonder as the first woman to win this category three times. She accomplished this honor after winning Album Of The Year for her 2020 album Folklore which she previously earned with Fearless and 1989.

In November 2010, Swift’s album Speak Now was the fastest-selling album with 1,047,000 copies sold in the US. Her third album garnered 18 percent of all album sales that week, and she outsold every album below on the list.

3 Most US Hot 100 Entries By A Female Artist Simultaneously

Taylor Swift took the throne from Billie Eilish, who had fourteen singles on the US Hot 100 chart when all her 18 songs from the album Lover debuted on the US Hot 100 category. Her studio album was a great success and included hit songs like Lover, ME!, London Boy, and Cruel Summer.

In iTunes’ digital history, Swift’s second single from the 2012 country album Red, We Are Never Ever Getting Back Together, climbed to the Number 1 spot within the first 50 minutes of its release, as noted by Bow Lyrics. It also reached the number 1 spot worldwide two hours faster than Born This Way by Lady Gaga.

1 Longest Streak As No. 1 On Billboard’s Artist 100 chart

Leaving behind Drake, Justin Bieber, Ariana Grande, and The Weekend, Swift went on to have a 36-week reign on the Billboard’s Artist chart at the number 1 position in 2019. She had previously held the position in 2014 and 2016 before breaking Drake’s record of 31 weeks as the top artist on the chart.

Taylor Swift has made several records in the country and alternative genres with her studio albums. After nine successful studio albums, Swift has been re-recording her previous albums and has already released Fearless (Taylor’s Version). Her much anticipated re-recorded version of Red (Taylor’s Version) is set to be released on November 19, 2021.