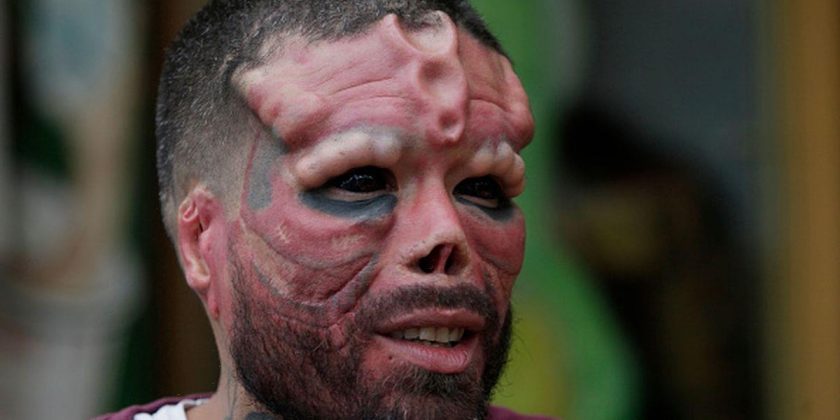 A man has gone to extreme lengths to look like Marvel villain Red Skull – getting his nose chopped off and horns inserted into his head.

He has also had his face tattooed with the aim to look like the fictional Nazi supervillain from the Captain America comics.

“Since I was a child, I've always liked what was different, extrovert and I am a comic fanatic and I love the Marvel Universe,” Henry said.

“For that reason, I decided to be who I am now and I feel good with myself. That's the most important thing.

“I wanted to turn myself into this amazing comic character who I've really admired since I was little.”

Henry has uploaded a variety of photos to his Instagram detailing his journey, which includes photos of himself before all of the procedures.

The 42-year-old has had his eyes tattooed black and had implants inserted into his head, cheeks and eyebrows.

He has also undergone a painful operation to have part of his nose removed and his ear lobes amputated.

He said: “I feel like there are similarities between this character and I regarding to personality and attitude.

“It is important to say that the only thing I don't have in common with him is his Nazi ideology.

“As for his physical appearance, I've always been attracted to that unique shape, his extrovert personality and uniqueness.”

The father made the decision to completely change his appearance back in 2012.

Over the years he has added a few more body transformations to differentiate himself from the iconic Red Skull.

According to his surgeon, Henry went underwent multiple physical and psychological tests before undergoing the body modifications.

All of his work has taken upwards of 130 hours to complete.

“My first transformation was the eye tattoo using a technique called inkeyeball,” he said.

“After this, I got two implants under my skin. It took around two years because it is a process that must be done in stages and it took longer than expected.

“The implant that I have in the middle part of my forehead was the first one. After that, I got the implants in my eyebrows and finally the ones in my cheeks.

“Then we carried on with the amputation of the nose and changed the shape of my ears.”

He has also had his tongue transformed into a forked tongue and plans on having more procedures done in the future.