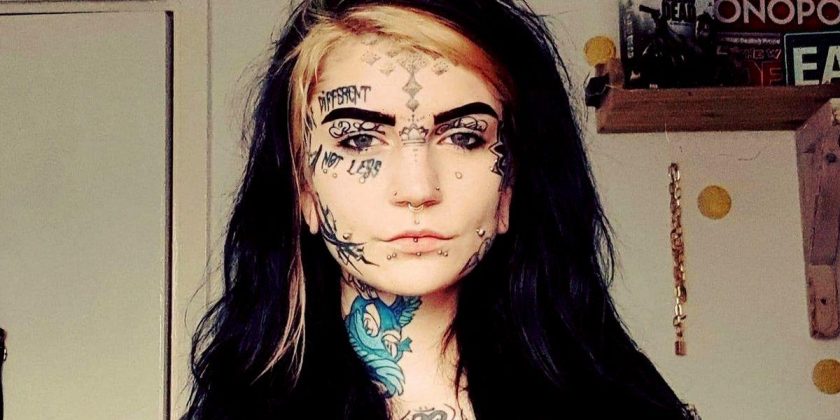 Tattoo models famous for their body art don’t often give fans a glimpse into how they used to look without any ink – but the people featured below have.

They have all spent countless hours under the needle to achieve their dream look.

And while most say they now much prefer to be plastered with tattoos, we will let you be the judge.

READ MORE: Model with extreme face tattoos is unrecognisable in old snap where she 'felt lost'

Below are some extreme transformations – from a British model with over 150 tattoos to a musician whose fans don’t recognise her in photos without the ink.

Alternative model Aimee Smith is known in her hometown of Oakham, East Mids, as the “girl with the tattoos”.

But she shared photos with the Daily Star showing how she looked without them, describing her old self as lost.

Reflecting on them, the 23-year-old mum said: “The picture of me with blonde hair is one I’ve never posted on social media and when I found it I was like, 'wow, did I really look like that?'

“I remember taking it to send to my boss and I’ve never looked at it since. It has really taken me back, my god.”

Aimee, who got her first tatt aged 13, added: “That was a time in my life where I was very lost as a person. I wasn’t comfortable and I didn’t feel myself.

“Looking at it was a big reminder of how lost I was and that just wasn’t me. If you look at my recent pictures I can really notice the difference, I can really see I wasn’t comfortable in old ones.”

When Sammy Farrow looks at throwback pictures, he sees a version of himself that wanted to hide from the world.

Now, after getting over 150 tattoos in six years, the 24-year-old, who lives in Cambridgeshire, works as a model and is celebrated for his face ink. Speaking with the Daily Star, he said: “When I see photos of myself without face tattoos I see a boy who wasn’t quite himself, someone who was shy, nervous and hiding.

“Since getting my face tattoos I have blossomed and become so much more confident in all aspects. I feel completely myself and I think face tattoo-less Sammy would look at me now and be proud and inspired.”

He added: “When I posted the photo with the tattoos removed everyone was saying it just doesn’t look even slightly right.

“They said tattoos suit me so well and they can’t bear to look at the photo of them removed as it’s genuinely removing a part of a person, which is funny to hear from so many people and I agree.”

Monami Frost is absolutely smothered in tattoos and her modelling takes care of her young family, making her one of the world’s coolest mums.

The popular influencer has 1.5million Instagram followers and she started getting tattoos aged 14. And she treated fans to how she looked before her epic transformation.

Monami wrote: “13 year old me vs 26 year old me. The glow up is real. I never thought I would post and show anyone that photo or any of the others from that time.”

“When I was developing body dysmorphia, looking at my own legs I felt like they were ugly and when I would have them tattooed I would feel like they are becoming more beautiful.

“That’s such a weird thing how I’m describing it but that’s how I feel.”

Her curvaceous figure is made up of striking portraits, calligraphy and geometric designs.

Mara claims not to have before pictures but she still treated fans to a snapshot of what she would look like devoid of her black and grey realism tatts.

Sharing a post where she wore thick Democal foundation to conceal her chest and face tattoos, one reply read: “Both are hot but I love inked women.”

A second wrote: “Gotta say… so used to looking at you with them that it’s weird to see you without them.

"I think you look amazing either way – but I’m firmly in the ‘with’ camp.”

A third said: “You look amazing either way but I love your ink work.”

Heidi Lavon is similar to the previously mentioned Mara Inkperial in that she is also an OnlyFans model who covered up in makeup to give a glimpse into what she could have looked like.

The American beauty has more than 10million followers across her TikTok and Instagram and she has graced the cover of FHM and other major tattoo publications.

Posting a video where she layers herself in nude-coloured makeup, a caption reads: “I quickly realised how thankful I was to look and be who I am today. An absolutely colourful freak of nature to some.

“But it just feels so much more normal this way to me… let your freak flag fly baby.”

One comment read: “That is insane! I love your art.”

And speaking with the Daily Star, Heidi said: “A huge part of my whole persona was missing. Someone this tattooed starts to forget how tattooed we really are.

“We forget that we look a lot different than most people look. Honestly it does take away from my confidence being that bare skin.”

One tattoo model who does have pictures of herself without her ink is Connecticut babe, Briana Todd.

She started to work on her body art in 2016 and she has added many intricate designs since then.

An impressed fan replied: “This is goals! I’d love to be a walking piece of art.”

The first snap is Briana with some tattoos on her arms and hipbone but the more recent one showed off her completed sleeves and her heavily inked stomach and thighs.

She boasts over 600 inkings and has spent a fortune doing so and earlier this year she posted a dramatic seven year transformation. The Aussie influencer posted a picture of when she was a bare faced teenager with just a tiny tattoo on her ribs.

Another said: “Such an amazing transformation.”

A third said: “So beautiful. Always have been.”

Californian stunner and OnlyFans babe Angela Mazzanti made her fans question whether an old photo was really her after unveiling her transformation.

She wrote: “In all honesty I can’t believe how much my life has changed since modelling.

“My biggest advice to anyone wanting to get into is don’t ever stop, and shoot as much as you can. Stay humble and remember where the f*** you came from.

“I’m happy to have met and worked with all the photographers, brands, models, tattoo artists and people in the past 8 years that I’ve been modelling.

“But remember this shit doesn’t happen overnight and without hard work you won’t get anywhere.”

A fan replied: “Wow. I would never have known that was you, I like your tatts.”

Another said: “No way that’s you.”