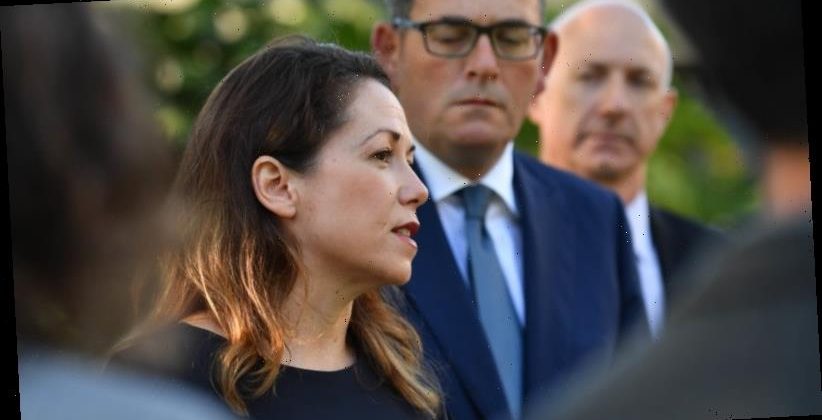 Ms Symes, an upper house member for Northern Victoria, will become the state's first law officer and hand over her responsibilities for regional development and agriculture to Ms Thomas, the member for Macedon. 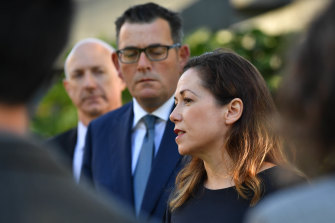 The new Attorney-General, who holds a law degree, will retain her responsibility for the resources portfolio and continue to serve as leader of the government in the Legislative Council.

The Altona MP quit to spend more time with her daughters as they finish high school but may return to cabinet after the 2022 election and is still considered a contender for the Labor leadership after the next ballot, should Labor win.

Mr Andrews' declaration on Monday that he would contest the next election as Premier means the leadership is unlikely to be handed over before then. 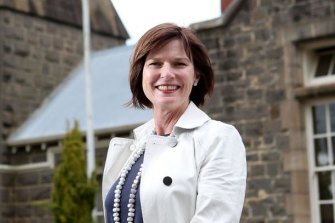 "Not only does Jaclyn have the necessary skills and background, she has a fierce commitment to carry on the work of reforming our justice system that I know makes her right for this role," Mr Andrews said on Tuesday.

Ms Symes, a Right faction MP who was elected in 2014, worked for five years as a ministerial adviser to Rob Hulls, the former deputy premier and attorney-general.

She will immediately take carriage of the government's bill to ban gay conversion therapy and allow convictions for minor offences to be quashed. Both bills will be debated in Parliament next year, along with a proposal to outlaw public drunkenness. 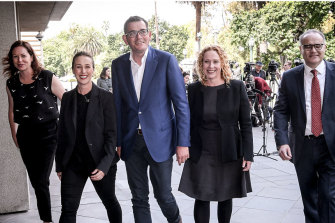 Ms Symes (left) was first appointed to the ministry after the 2018 election, when the Premier reappointed Adem Somyurek (right) to cabinet.Credit:Photo: Eddie Jim

Ms Thomas, a member of the same Socialist Left faction as Ms Hennessy, worked as a secondary school teacher and in the union movement before becoming an adviser to former education minister Lynne Kosky.

She worked in communications in the Department of Premier and Cabinet and also worked at National Australia Bank.

Labor's cabinet is picked by factions, which are allotted a specific number of spots depending on how many MPs each grouping has.

Mr Andrews said Ms Thomas was an "unwavering voice for the people of her community – and people in regional communities across our state".

"She'll bring that same determined sense of advocacy and enthusiasm as our state's new Minister for Regional Development and Minister for Agriculture," he said.

One of Ms Thomas' first tasks will be to fill an urgent shortfall of workers on Victoria’s farms, with the federal government pushing for Victoria to set up a quarantine arrangement for seasonal workers to fly in from the Pacific Islands.

The Victorian Farmers Federation has warned thousands of workers are required to prevent food rotting on trees and inflated produce prices. The state government has made no announcements on agriculture since Mr Andrews told national cabinet it was a priority 10 days ago.

Catch all the day’s headlines

At the end of each day, we’ll send you the most important breaking news headlines, evening entertainment ideas and a long read to enjoy.  Sign up here.