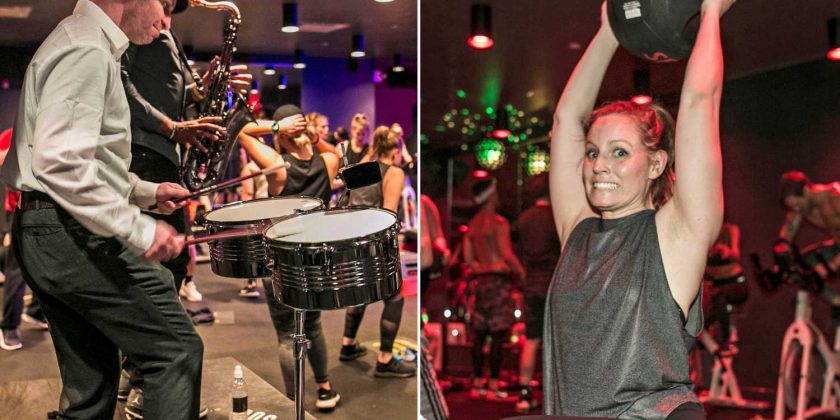 If you go to Switch Playground’s latest class, you will get sweated on and you may momentarily lose your hearing. You will never hear a cowbell the same way again. You may feel as though you’ve lived 1,000 gym rat lives and your skull is a cocktail shaker full of brains.

You may also build some muscle.

The whirlwind class, offered Mondays at 6 p.m. at the studio’s Soho location ($36), crams up to 90 people into a basement room, partners them up and cycles them through 20 (yes, 20) different stations, each lasting two minutes. Routines, which are mimed out by about half-a-dozen trainers circulating the stations, range from a StairMaster to biceps curls to burpee pushups.

The class has gained a reputation over the past couple of years for coalescing both the really attractive and the really attention-deficit. But now, with the addition of musicians on periodic weeks (check Instagram for upcoming dates), it’s even more chaotic.

In this particular class, saxophone and timbales (two drums and a cowbell) players are conducted by the class’s mainstay DJ, Olivia K. The musicians improvise along to the adrenaline-bumping hits, such as Sugar Hill Gang’s “Apache (Jump On It)” and, fittingly, Will Smith’s “Switch.”

This jam-sesh-meets-nightclub-meets-fitness-fever-dream is borderline hellish.

But it’s not boring.

A recent class got started with the gym’s Instagram-famous leader, Steve Uria, guiding the packed room through about five minutes of yoga. Uria is 50 years old, built like an ox and possibly not human. He has a great tan, though. He says he’s always loved having a live DJ in the classes, “but then I thought to myself, ‘What could be another cool component to create that energy?’ ”

After yoga, the music begins to amp up. And with a guttural heave, Uria yells out to his toned masses, “Namaste . . . now let’s get this party started!”

Then, the room gets slicker and smellier by the second. We’re running. We’re lifting. We’re throwing increasingly slippery weighted balls at each other. Despite the grueling regimen, the only thing sore the next day was my back.

But man, I do love that sax. Nkwa Asonye is the deliverer of these soulful tunes, my one joy in the hourlong workout. He was skeptical at first of playing live music for a gym class.

“To say it’s the weirdest gig I’ve ever had would be an understatement,” the Long Island-based musician tells The Post. “But it ended up being one of the coolest things I’ve ever been a part of.”

We agreed that the adrenaline of the class had the feel of an intense live performance. His partner, timbalero Vin Scialla, loved that class participants were pacing their routines to his drumbeats: “I felt like I was working out!” Scialla says.

But the next time I work out, I’ll probably choose something more chill, like pilates.