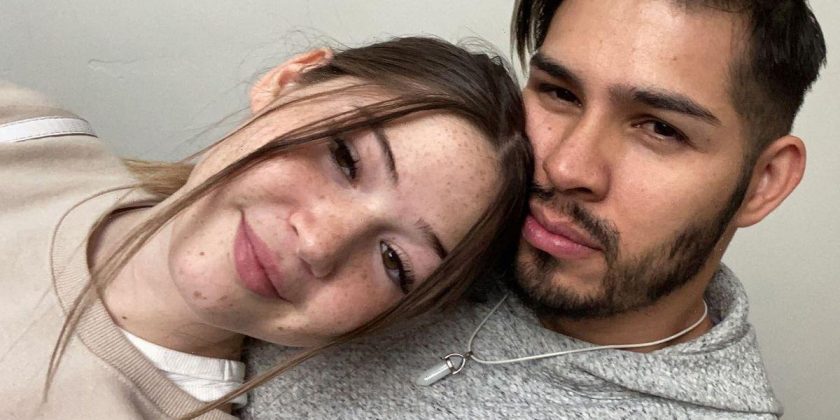 Marley Roze was instantly attracted to Gideon Mazikeen from the moment she started working at her new job – despite him being 14 years her senior.

And although the age-gap wasn’t a problem, both already being in relationships was.

Gideon, 33, was asked to train Marley, 19, on her first day at the call centre and it wasn’t long until they were dating.

They ditched their previous partners and one year later they are now swingers who make “significant” amounts of money on OnlyFans.

The pair quit the call centre and they host their own swinging podcast called Love N’ Kink.

And speaking to the Daily Star, Marley said: “My mum was the only person who wasn’t super accepting about me being a swinger.

“I think she thought I didn’t want to do it or Gideon was pressuring me into it. Obviously he wasn’t and it was my decision and my choice and it has been a lot of fun.

“One of the things my mum said to me was she doesn’t want the world to know me for sex and I was like the world already knows me for sex because of OnlyFans and I can’t do anything about that.”

Marley and Gideon, who are from Utah, US, decided to become swingers because they both had cheated in past relationships.

They took it as a sign that monogamy wasn’t for them and they started a podcast to document their journey.

Speaking about the craziest swinging experience they’ve now had, Gideon said: “We were at our second ever swinging party and they started playing truth or dare. “The majority of the room was playing but then these two sets of couples were just openly having sex with each other while playing the game.

“We were jumping back and forth from playing the game amongst each other and being rowdy and then we were just watching them, we were like ‘wow these guys are really going at it’.”

They described it as a church state where abstinence rather than safe sex was encouraged in school.

And although they are now swingers with a TikTok following of 21,000 people, they said the lifestyle wasn’t as wild as the party they referenced earlier suggested.

Gideon gave an insight into the first time he and his girlfriend slept with another couple.

He said: “One thing we learned is that everyone is just super friendly and sweet and they are all just there to make sure everyone is comfortable. Consent is very important.

“The first actual couple swap was nerve racking, you are suddenly naked with another couple and you’re like ‘OK how is this going to work’.

“But every step of the way there was permission asked to do anything even once sexual acts started being engaged in.

“if I wanted to try or do something different I would just ask for permission and the other couple would talk amongst themselves really quickly and would say ‘yea that’s fine’ everyone practices safe sex.”

Marley and Gideon will only have sex with other couples if everyone is in the same room.

And Gideon added: “Personally I think with swinging, if you find the right people you will have some of the best friendships and connections you will ever have because everyone is so open and communicative.”

The pair say their full-time job is now OnlyFans where Gideon manages both of their separate accounts.

Their lifestyle has now changed dramatically because of the money they are earning from the explicit site.

They have just bought their own home and are about to splash out on a new car.

And giving advice to UK couples interested in swinging, Marley said: “Talking with your partner and making sure you have boundaries in place is so important.

“You need to be on the same page so feelings don’t get hurt.”

And Gideon added: “When it comes to dabbling in swinging I always say to go at the pace of the partner who is most timid.

“If you try to go at the pace of the person who is already really ready to go, it is not going to work.

“That person needs to control themselves and go at the pace of the partner.”