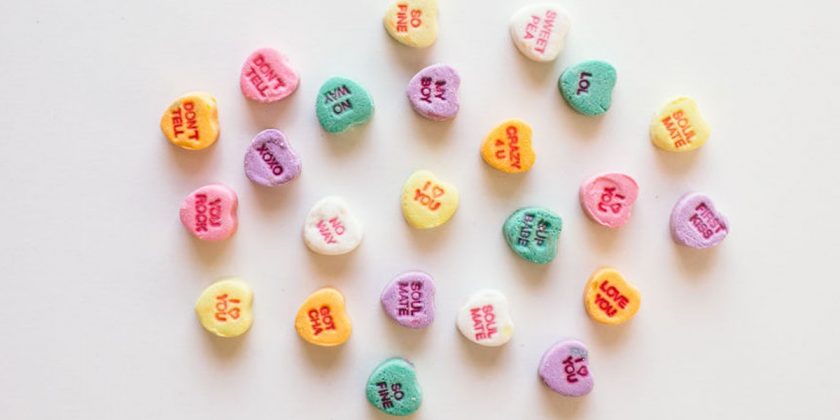 Flirting up a storm with your crush or your S.O. this Valentine’s Day via conversation hearts is about to get a lot harder. Sweethearts Candy won’t be available for Valentine’s Day 2019 following the bankruptcy of its parent company last year, which means you won’t be able to express your feelings with conversation hearts reading "So Fine," "Crazy 4 U," or "Kiss Me" come Feb. 14. Before you mourn the end of an era, however, there’s one silver lining to the whole situation: The sweets’ absence is only a temporary one.

Last year, the future of the New England Confectionary Company (NECCO) seemed pretty uncertain after they announced their bankruptcy, and people were low-key freaking out. Tongue-tied individuals looking for a way to share their feelings on the day of love have been relying on the conversation hearts for years, and unsurprisingly, it was the most popular candy sold on Valentine’s Day in 2018, according to CandyStore.com.

Luckily, Spangler — the makers behind confections like Dum Dums and Circus peanuts — saved the day when they decided to take the defunct company’s Necco Wafers and Sweetheart candies under their wing. It was a moment of relief for NECCO faithfuls who’d been stocking up on the company’s candies like no one’s business amidst rumors of the candy giant’s financial woes.

Unfortunately, because of the timing of all of this and the fact that the company only had five months until Feb. 14 after they acquired the candies, Spangler revealed that the Sweethearts Candy wouldn’t be available this Valentine’s Day to facilitate your flirty AF conversations.

In a September 2018 statement, they said.

They continued, "We are particularly excited about the Sweethearts brand. Many people have memories of sorting through their box of Sweethearts to find just the right message to share."

While I’ll admit that the chalky consistency of the Sweethearts isn’t my favorite thing, there’s just nothing that gets things going with your crush quite like a heart candy that says "Ur Hot" or "Text Me." The candies have reportedly been around since 1901, so they definitely know what’s up in the romance department.

Although fresh batches of the conversation hearts won’t be available for purchase, you can still get your hands on them this year — although at a slightly higher price. I found that Sweethearts is selling 8 boxes on Amazon for $11.95, while an 8-pack is going for $11.99 on eBay. However, if you purchase them online this year, I’d keep in mind that the candies are likely to be from last year or the year before so you might want to wait until Valentine’s Day 2020 to get your freshest batch.

In the meantime, I’d recommend grabbing a bag of Sour Patch Kids Conversation Hearts Candy, which features a hilarious mix of sweet and sour messages. You can find everything from "Ew no" and "Friend Zone" to "DM Me" and "Bae" in these goody bags. OK, so maybe they’re not the sweetest Valentine’s Day sentiments, but they’ll do until America’s favorite conversation hearts come back to shelves next February.