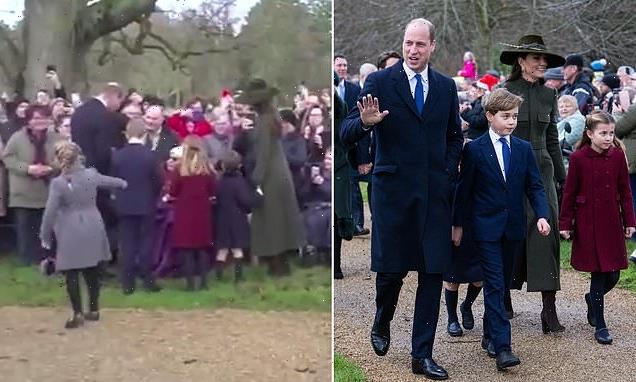 They’re always on their best behaviour when out in public with their parents, but Mia Tindall and Prince George shared a glimpse of their cheeky bond on Christmas Day.

A sweet clip filmed on the day shows the daughter of Zara, 41, and Mike Tindall, 44, try to get her nine-year-old cousin’s attention during their walkabout after the service at St Mary Magdalene Church in Sandringham on Sunday.

Dressed in a grey dress coat, Mia, eight, who is the Tindalls’ eldest daughter, could not resist tapping George on the back as she passed him by, but had no choice but to walk on when the Prince did not react.

The royal family put on an united front on Sunday as this year marked their first Christmas celebrations without Queen Elizabeth II, who died on September 8.

In the blink-and-you’ll-miss-it moment, Mia can be seen walking up to her cousin and playfully poking him in the back while he spoke to some well-wishers.

The playful moment occurred as members of the royal family stopped to speak to some royal fans on their way back from their Christmas Day service.

Prince George, dressed in a navy suit, just like his father The Prince of Wales, 40, diligently remained focused on his task at hand, even with his cousin tapping him on the back.

Mia, who wore a grey coat dressed that matched her mother’s number and her father’s suit, was seen grinning as she stepped away from her cousin. 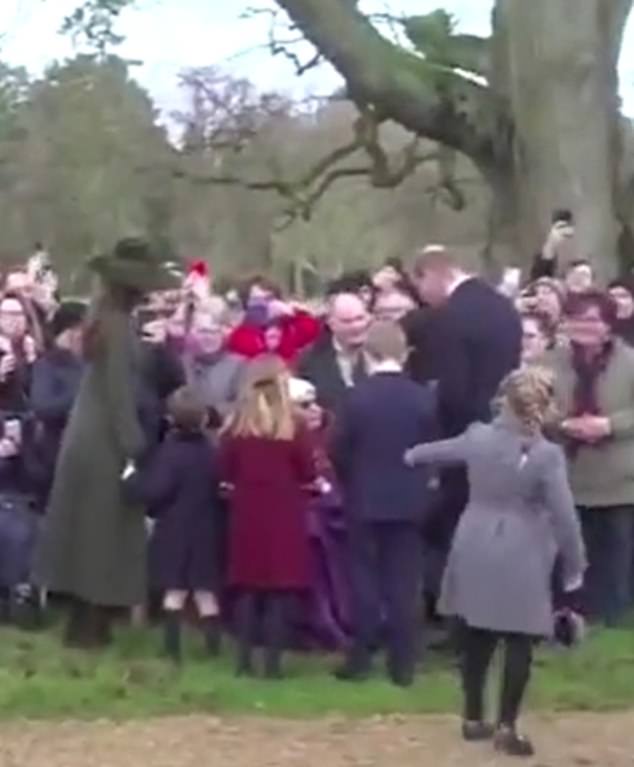 A sweet clip filmed on Christmas Day shows Mia, Tindall, eight, left, trying to get her nine-year-old cousin’s attention during their walkabout from St Mary Magdalena Church in Sandringham 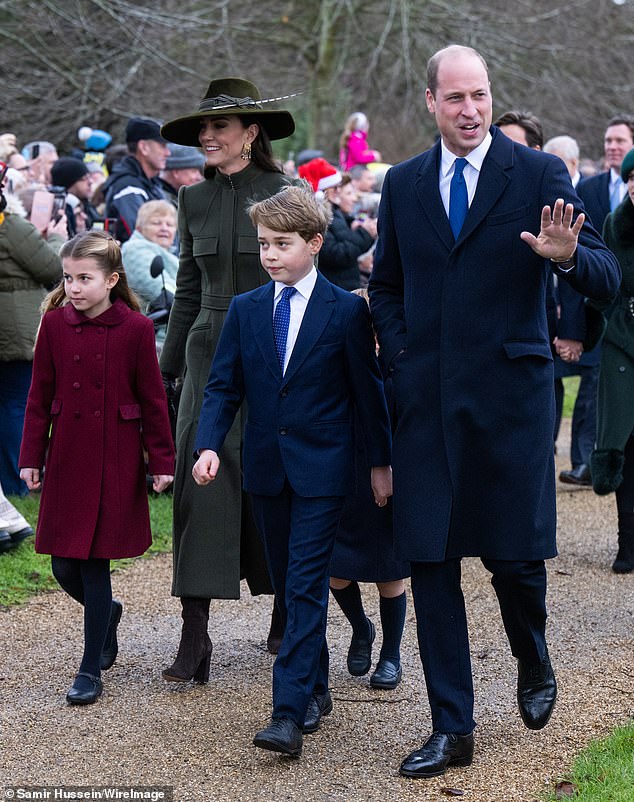 Prince George, along with his sister Princess Charlotte, seven, and their parents, the Prince and Princess of Wales, both 40, took part in the walkabout on the Sandringham estate on Sunday

How Prince Louis stole the show in 2022: 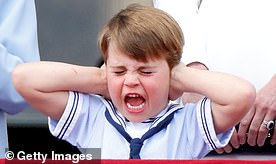 She attended the service with her parents and her younger sister Lena, four, who was dressed in a pretty burgundy number.

The girls’ younger brother, who was born in March 2021, stayed at home, perhaps a bit too young to attend the religious service and walkabout.

Meanwhile, it was Mia and Lena’s cousin Prince Louis’s first Christmas Day Service, and the young royal once again stole the show during the royal event.

Dressed in a pair of navy short and a Winter coat, the youngest of the Prince and Princess of Wales’ children, four, put on an animated display as he ran after his sister Princess Charlotte, seven, during the outing.

In a clip posted on YouTube, the four-year-old is seen running after Prince William, Prince George and Princess Charlotte along the path to the church.

Having fallen behind his family, Louis is heard crying out: ‘Charlotte!’

The young royal is seen holding a Father Christmas toy he’d been given by a royal fan in one hand and a small bouquet in the other.

While witnessing the sweet moment, crowds of fans can be heard saying ‘awww!’ as Prince Louis looks back the the well-wishers – appearing confused by their reaction.

Prince William then lovingly strokes his youngest son’s hair as the four of them continue on to the church together. 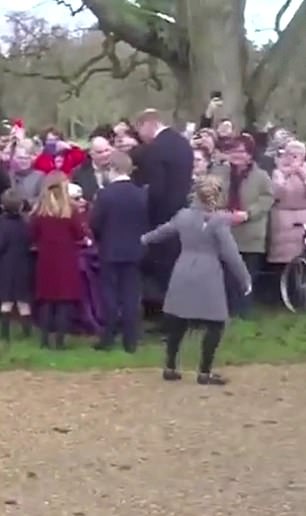 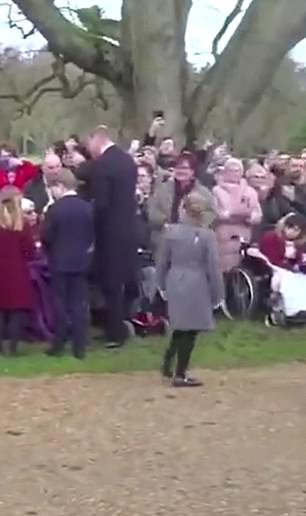 Playful Mia can be seen poking her cousin on the back in order to make him turn around, but walks on when he doesn’t react

Mia Tindall, eight, flashed a coy smile as she walked with her hands crossed in front of her while wearing a grey coat and burgundy headpiece to match her mother’s ensemble (pictured with her father Mike) 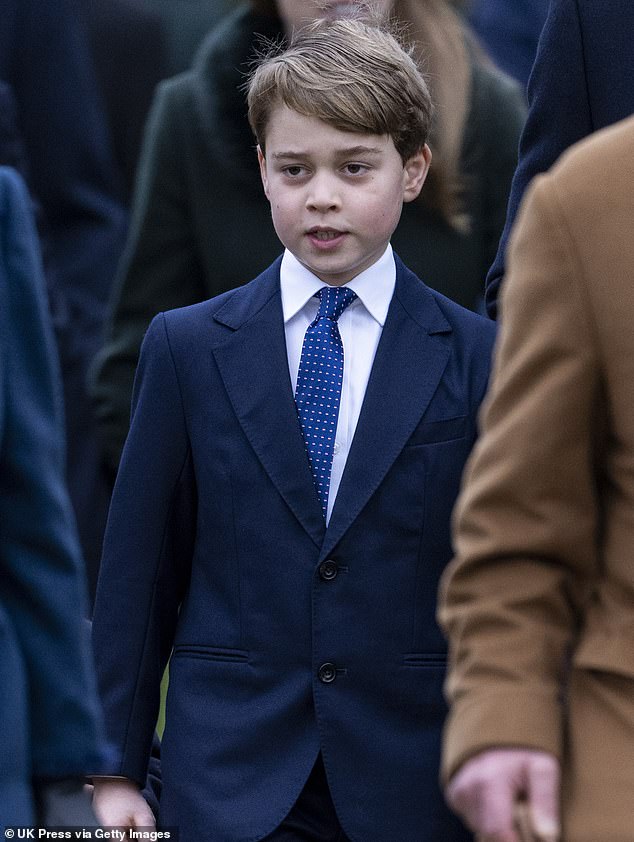 Future king Prince George, nine, looked regal in a sharp suit and tie as he attended only his second ever Christmas walkabout – but he looked ever the professional

In another video taken on the day, Prince Louis shared a Paddington bear drawing with his mother and a child she was speaking with.

The video shows Prince Louis asking Lt. Colonel Johnny Thompson – who had accepted the drawing on his behalf – if he could take a closer look.

Clearly impressed with the illustration, the youngster walked up to the Princess of Wales – who was busy speaking with a young well-wisher.

Taking the drawing from Louis, she then crouches down to show a young girl the Paddington bear picture in closer detail. 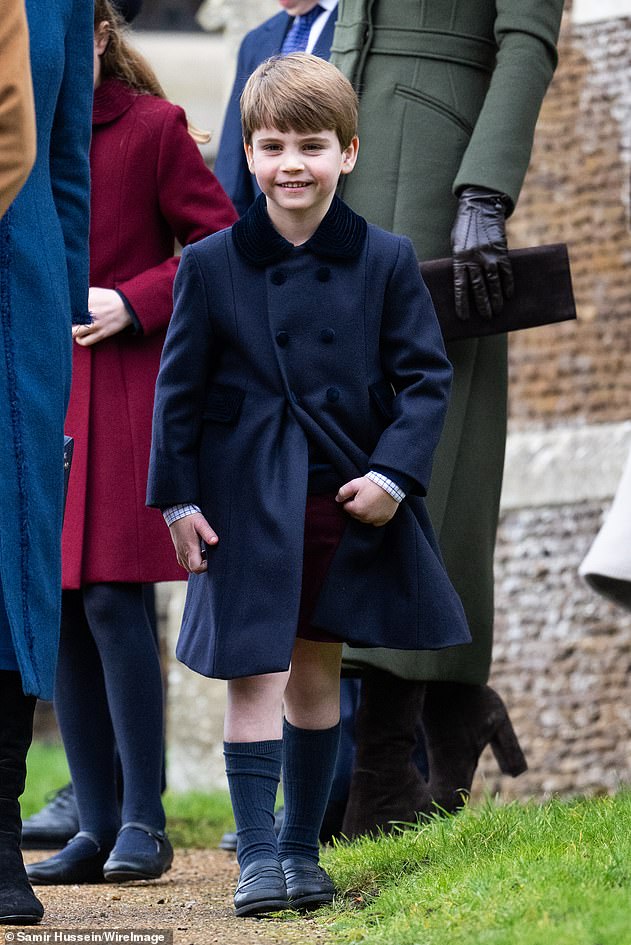 In the background, crowds of well-wishers can be heard saying: ‘Merry Christmas Louis!’

Having captured the sweet interaction on camera, the royal fan captioned the clip on Twitter: ‘Moment Prince Louis receives a Paddington Bear picture from Lt. Colonel Johnny Thompson and hands it over to his mummy.’

Brotherly love! New video shows how Prince Louis runs after the rest of his family so he could give Princess Charlotte a bouquet of flowers at Sandringham Christmas walkabout