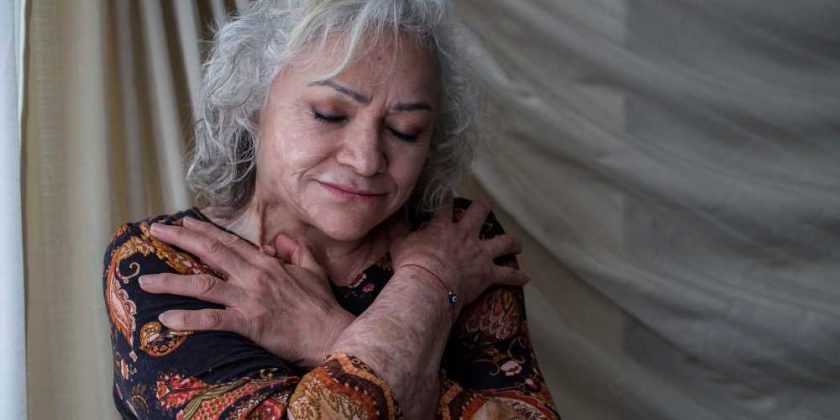 US will offer COVID vaccines to migrants in custody: report

MEXICO CITY — Elisa Xolalpa has had three daughters and found a job she enjoys since a former boyfriend tried to destroy her life by tossing acid on her when she was 18. Two decades later, she is still seeking justice.

Survivors of acid attacks like Xolalpa are banding together and raising their voices in Mexico despite the country’s high rates of violence, which often targets women, and staggering levels of impunity.

“I thought I was the only one,” said the 38-year-old, who grows flowers on Mexico City’s south side. “But we’re not alone anymore.”

Earlier this year, the Carmen Sánchez Foundation formed here to provide support and lobby for legal reforms for survivors of acid attacks. It has registered 29 such attacks so far, five already in 2021, but believes that is only a fraction of the real number.

Survivors want the attacks classified as attempted femicide, aid with the innumerable surgeries that follow and psychological support. They want to be seen even though their faces hurt.

“Mom, what is acid?” 9-year-old Daniela asked Xolalpa one day. For a moment Xolalpa was silent. Then she told her daughter that it was a liquid they used in the greenhouse that is dangerous. Another day Daniela left school in tears. “Some kids told me you’re ugly, Mom, and it’s not true,” Xolalpa said her daughter told her.

Xolalpa has a sweet gaze. She enjoys growing flowers in the chinampas — fertile islands interlaced by canals in the capital’s Xochimilco borough — like her ancestors did. She recognizes that one day she will have to explain to her three daughters, product of another relationship, the attack that changed her life and for a time left her wanting to die.

These days she is focused on preparing herself mentally for a new court hearing for her attacker, who was finally arrested in February. She has made three complaints to authorities and suffered constant threats from him. For now he only faces a domestic violence charge, but Xolalpa hopes that will hold him long enough to pursue an attempted femicide charge.

Her attacker’s lawyer has been dismissive. “He says I’m alright because I was able to have a family,” she said indignantly. She entered the relationship with the father of her three daughters “to feel that I could please someone despite the scars,” Xolapa said. “It was a mistake, I’m still damaged.”

Dousing someone in acid means wanting to dissolve a person physically and psychologically. It is always premeditated, according to the United Nations.

In Xolalpa’s case, she was tied to a post. The acid dissolved the ropes, but also her clothes and her body as she ran half-naked for help. She has had 40 surgeries to repair her body.

Carmen Sánchez, who started the foundation that bears her name, was eating breakfast with her mother and sisters at home in 2014 when her partner entered and threw acid on her face. He fled with a driver who was waiting outside as Sánchez’s chin melted to her chest and her cell phone dissolved in her hand.

It took years before Sánchez turned to activism.

One day in 2017, Sánchez called Gina Potes, a Colombian survivor, whose collective “Rebuilding Faces” helps other women who have survived attacks. Potes happened to be on her way to a doctor’s appointment.

“She told me about all her pain, she cried, she talked to me about her surgeries,” Pontes recalled. When Pontes got to the doctor, “I told Carmen, ‘Look, I’m going to strip, but we’ll keep talking, don’t worry.’”

Seeing Pontes bare her scars without any shyness shook Sánchez. She understood that trying to hide what had happened didn’t help. So while she sought justice in her case and underwent operation after operation — she’s up to 61 — she began to talk with other survivors, seek out donors, psychologists and doctors.

“From the beginning I only had two options: let myself die, something she considered many times, or look at my scars, inside and out, and understand that that was my new reality,” Sánchez told lawmakers in late July when she received a prize from Mexico’s lower congressional chamber.

Sánchez made it clear to the lawmakers that women like her face not only violence from their aggressors, but also the “indifference and impunity of the state, revictimization by the media and social and labor exclusion and discrimination.”

There are children and men among the victims of acid attacks, but 80% are women, according to The Acid Survivors Trust International (ASTI).

They are usually attacked by partners or former partners or people paid by them out of jealousy or revenge, according to U.N. Women, the United Nations’ gender equality entity.

ASTI documents about 1,500 acid attacks per year, but says the real number could be higher.

Acid attacks aren’t limited to any particular part of the world, certain religions or cultures, but rather to conservative institutions and “the deep economic and social inequalities of gender that exist,” said Jaf Shah, the organization’s director.

“Many attacks may not be reported,” Shah said. “If they are reported there is a chance that they could be classified under a different offense.”

Sayuri Herrera, Mexico City’s special prosecutor for femicides, said that more acid attacks are being registered in Mexico. Her office is currently reviewing older cases that were originally classified as serious injuries to see if they can be reclassified as attempted femicide like Xolalpa’s.

Only three of Mexico’s 32 states have classified acid attacks on women as attempted femicide. Violence against women in Mexico extends far beyond acid attacks making it more difficult to gain attention.

In the first half of the year, 1,879 women were murdered in Mexico and ore than 33,000 injured, according to federal government data. More than 10,000 rapes were reported and nearly 24,000 cases of domestic violence.

In June, Xolalpa and other women protested in front of the capital’s prosecutor’s office to pressure for resolution of their cases. Meanwhile, new cases keep surfacing.

Ximena Canseco, a co-founder of the Carmen Sánchez Foundation, recalled one day, July 29, when a survivor from an attack 30 years ago contacted them and they found a message asking for help on Facebook from the mother of a girl who had just had acid tossed on her from someone on a passing motorcycle. That same day, Canseco learned a 30-year-old woman who had recently shared her story had died of COVID-19.

“She never made it public, she had lost everything and was still receiving threats,” Canseco said. “We talked for an hour.”

Xolalpa said we can’t allow the violence to be normalized and that’s a message she wants to teach her daughters.

“I have to turn this pain into something else,” she said. For now, that means demanding justice and not being silent.