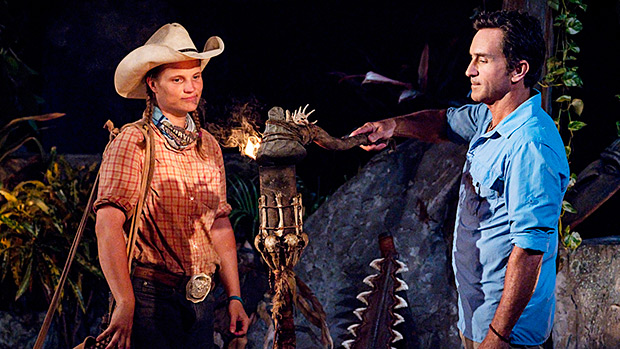 After being eliminated from ‘Survivor,’ Elizabeth dished to us EXCLUSIVELY about the moment she knew her epic plan was falling apart, why her own allies voted for her and more!

The tribes merged into one on the Nov. 7 episode of Survivor: David vs. Goliath, and Elizabeth Olson, an original David tribe member, was first to be voted out. At the merge, there were seven original Goliaths and six original Davids. However, there was also a secret mixed group of six within that, made of three Goliaths — Alec Merlino, Alison Raybould and Mike White — and three Davids — Gabby Pascuzzi, Christian Hubicki and Nick Wilson. For this vote, though, the Goliaths stayed strong to their original alliance, and targeted Elizabeth.

Everyone was on-board with the decision, except for Angelina Keeley, who wanted to go for a bigger target, Christian, instead. When no one would agree with her on that, she decided to spill the beans to Elizabeth and tell her she was getting voted out. Elizabeth used this as gumption to flip the switch on Angelina. At tribal, she let the Goliaths know that Angelina was sharing their secrets, and it led to a pretty wild blow-up, with Goliath members accusing Angelina of just trying to secure jury votes.

In the end, though, Elizabeth’s plan didn’t work, and it was a unanimous vote against her. Here’s what she had to say about it!

Were you able to approach any of the Goliaths before tribal to set your plan in motion? No, because Angelina’s smart and didn’t let me know that information [that I was getting voted out] until the very last second. So I didn’t have time to have conversations at camp and convince people one-on-one or in a better setting with time. I just did not have that opportunity. My plan all day and even before was to get Dan [Rengering] out, so I wasn’t sitting around on my butt twiddling my thumbs, hoping everything was going to my way. I had a plan in place, but I was feeling like the whole Dan thing wasn’t transpiring. The Angelina thing as not my first choice. I would’ve rather played with her than Dan, but when you have a massive crack like that, you have to do whatever you can.