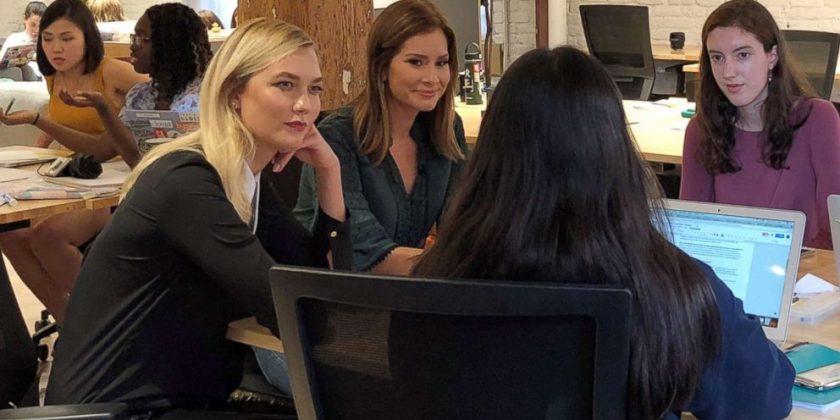 It’s about 7 a.m. on an early autumn day in New York City and supermodel Karlie Kloss is quickly becoming a morning person.

“I don’t know when or how this happened, I don’t think I’ve slept past the sunrise any day this week,” Kloss told ABC News’ Chief Business, Technology and Economics Correspondent Rebecca Jarvis in an interview for “Nightline.” 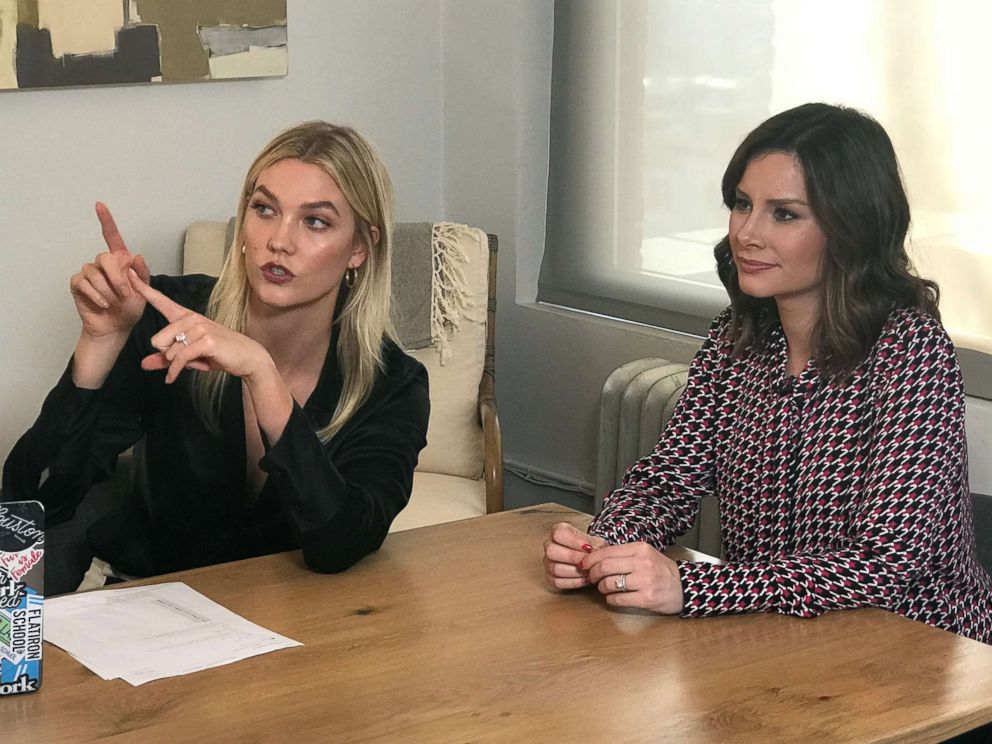 Kloss has been busy lately. She’s done more in a few days than most do in a whole year, marrying Joshua Kushner, the brother of Jared Kushner, on a Thursday, jetting off for a two day honeymoon and getting back to New York just in time to start a new job as host of Bravo’s Project Runway.

On this particular morning, Kloss is coming off of a 16-hour day filming Project Runway and is getting ready for an event with Adidas, one of her many brand ambassadorships.

Despite the long days and early mornings Kloss embraces it all.

“That’s kind of my life but the good thing is I really love what I do,” said Kloss.

The 40-time Vogue cover girl got her start at just 13-years-old when she was discovered at a mall in her hometown of St. Louis, Missouri. She was approached by two modeling scouts, Jeff and Mary Clarke, the husband and wife duo behind Mother Model Management, who also famously discovered Ashton Kutcher at The Airliner Bar in Iowa City.

In Kloss’ case, they were recruiting for a charity fashion show.

“I was just at the mall with my friend and I was wearing Birkenstocks and just living my life at 13 years old…And at that time I literally had no interest in that [modeling] or really idea of like what the fashion industry was. It just wasn’t in my world.”

Kloss said she realized quickly “it really was something I really enjoyed” and it didn’t take long for her career to take off. The modeling scouts introduced her to agents and by the time she was 15-years-old she was walking in her first major runway show.

“That fall when I started my freshman year of high school I got an opportunity to walk in New York Fashion Week for Calvin Klein and I was 15 years old. Like literally had started high school two days before and it just put me on the map.”

Kloss became a breakout star in the industry, walking in 31 shows her first New York Fashion Week season. Over the course of the next few months Kloss got an apartment in New York City and was traveling around the globe with her first major fashion campaigns for Bvlgari and Dolce & Gabbana. 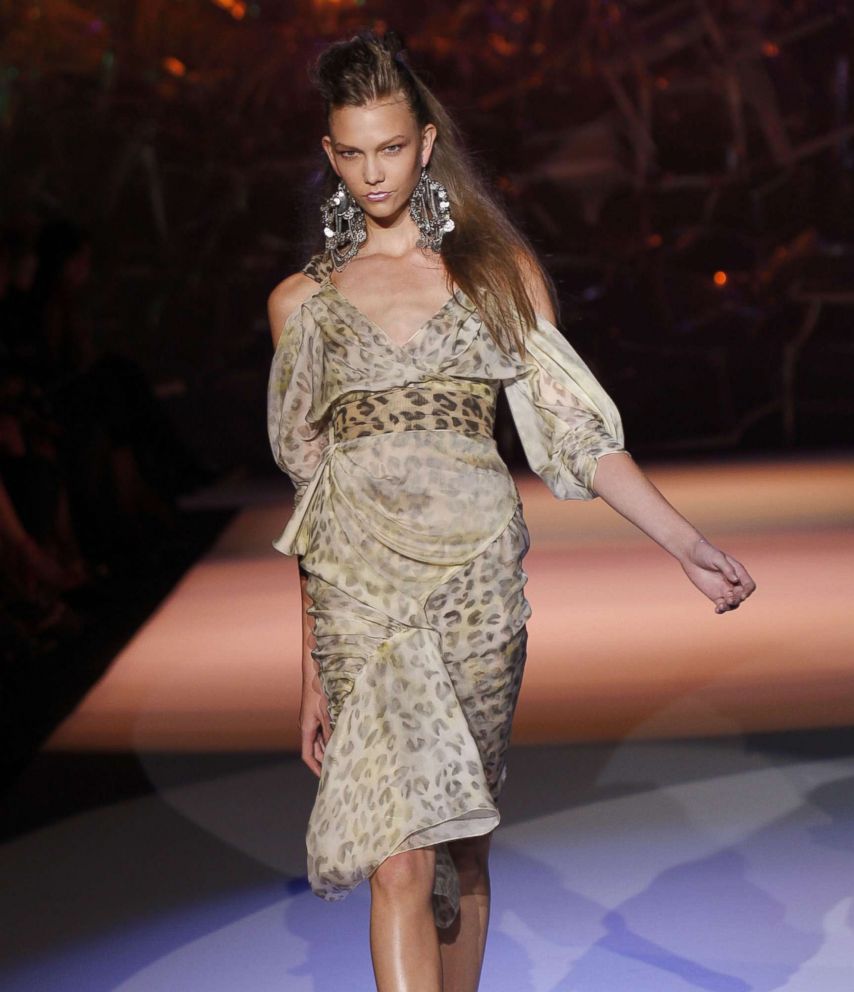 But while she was living the life of a glamorous and worldly model, back home in St. Louis, pre-social media, she was just an average teenager.

“I was 15 years old, I was tall and lanky, no boys were paying any attention to me. I felt totally out of place in St. Louis, just like every teenager does. And it kind of was like this secret alter ego that I got to live out and build a career. And no one really knew about it back home.”

Over the next 11 years Kloss would become one of the most recognizable faces on the planet, gracing the runways of major designers like Oscar de la Renta, Christian Dior, Versace and Diane von Furstenberg.

“I was going back and forth between, like, sitting in my chemistry class, getting on a plane that night right after school going to Paris, walking Dior Couture opening the show…and then going back home and like needing to like still turn in my five paragraph essay,” said Kloss. “But it was really amazing dual world and life that I lived and still live, I guess.” 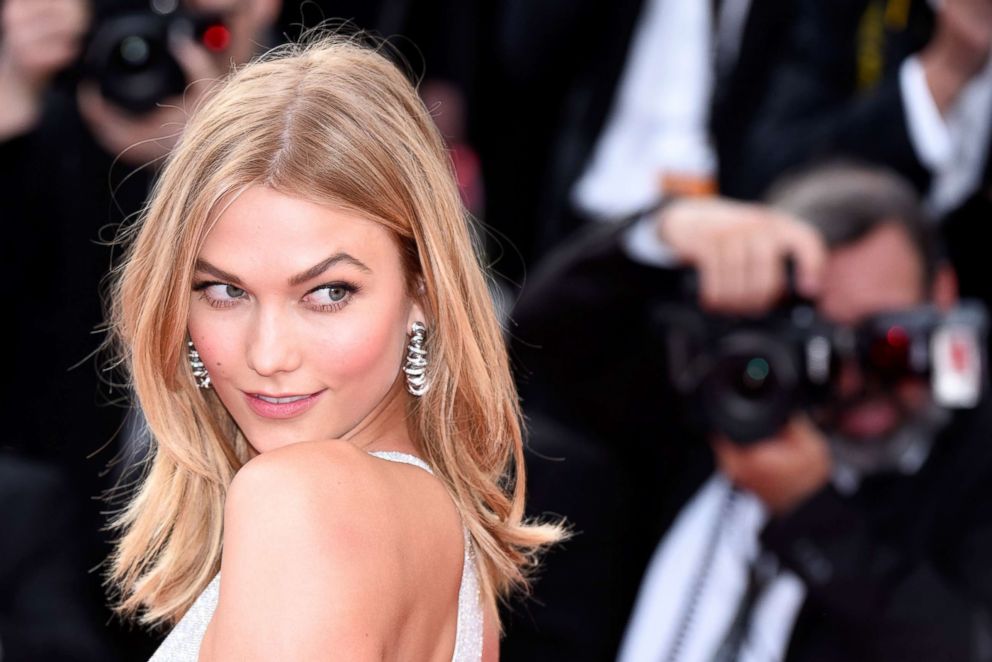 Today that “dual world” includes another passion — coding. On the surface it’s one that might seem unexpected, as the couture-clad super beauty doesn’t necessarily fit the stereotype of a hoodie-wearing coder, but Kloss has had a love of math and science from the beginning.

As the daughter of an emergency room physician, she looked up to her father, fascinated by his ability to problem solve and help people using science.

“I definitely thought being a doctor would be my kind of career path. I always was really fascinated by science, by math and I loved the idea of being able to help people with a skill set,” she said.

Kloss discovered her own love of coding by taking classes at The Flatiron School in Lower Manhattan. Her instructor and dean of the school, Avi Flombaum, said that she was a natural.

“I met Karlie, I was doing a class for two of my friends and they asked if she could join…She showed up on day one, really took to it and outperformed my two friends,” Flombaum told ABC News’ Rebecca Jarvis.

After that first lesson in 2014, Kloss was hooked.

“That whole week, and more and more, she started emailing me if we could spend time on the weekends coding and that sort of snowballed,” Flombaum said.

But eventually, Kloss wanted to do more than just learn herself. She wanted to figure out a way to give other women the skill that she found so valuable. With the help of Flombaum, she started a scholarship giving 21 teenage women across the U.S. the opportunity to take the Flatiron School’s two-week pre-college program coding class, the same one that Kloss took when she fell in love with coding.

“I have this audience of young women across the country around the world, and I really care about the message that I’m sending them both through my words and my actions. And I thought, you know what, I would love to offer them something more meaningful than just a picture backstage at a runway show.”

Just one year after starting her own coding journey, Kode With Klossy was born.

Today the free two-week summer coding camp has grown to 50 camps across 25 cities across the U.S. girls ages 13 to 18 can apply to attend through the company’s website and be placed in classes of 20 where they learn to code real-life apps.

It’s not abnormal for Kloss to pop into one of the camps, and she’s become a mentor for many of the young women who have been with the program since the start. “Nightline” joined her for one of those visits at a camp in New York, where level 3 campers are learning Swift, the coding language used by Apple developers.

“It’s really amazing because I feel like I really have seen them grow so much, beyond just learning code…They’ve been able to grow as humans. I think it’s such an intense moment in life being in your teen years and high school and you’re kind of figuring out so many things and I see these girls kind of come into their own power, come into their own confidence, and they realize all that could be possible in their lives, in their careers, and it’s just so fun and amazing to watch. I get goose bumps, I really do. They’re my little sisters.” 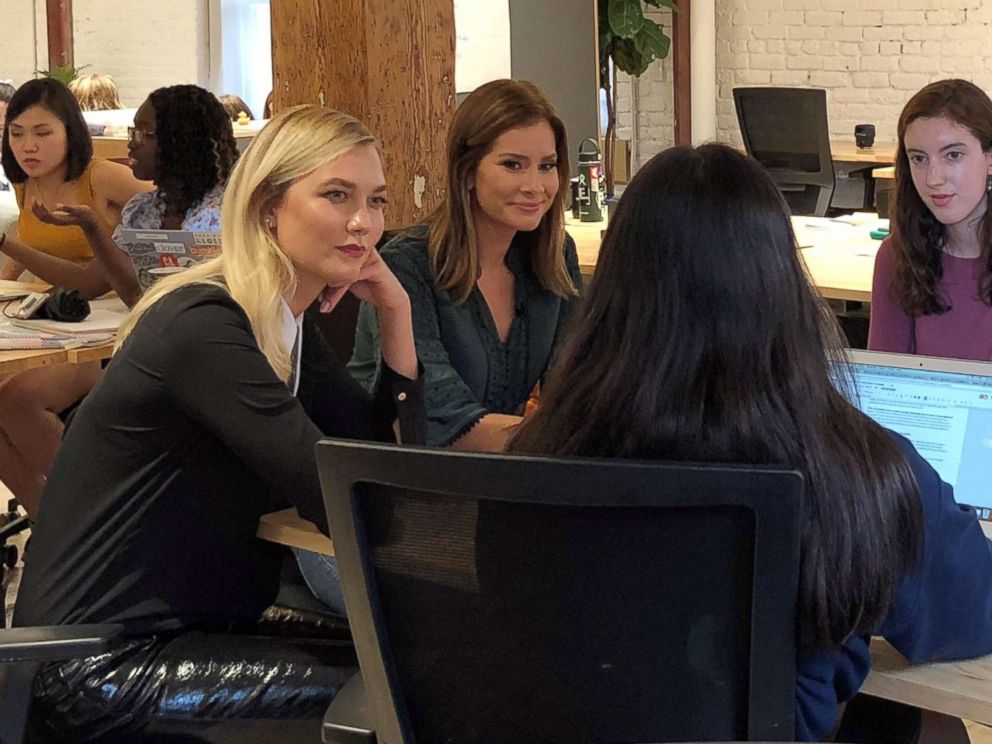 In the beginning, the young coders first learn the basics of the new language and then collaborate to design and build a new app. They were in the final stages of creating applications targeted at real world problems when “Nightline” stopped by. But it’s not just the curriculum that these young coders love, it’s the relationships they are building with other young women in technology.

Many of the coders we spoke to said that the camps provide a supportive place to grow and thrive. Valeria Torres-Olivares, 18, began learning to code in her sophomore year of high school. But she said the past two summers she has spent at Kode With Klossy have “been a rejuvenating experience having amazing girls to work with and talk about code with.”

“You don’t feel comfortable asking your peers questions because most of the time they are male and most of the time, whether they are mean to you or not, they do make you feel like you are less than them,” Torres-Olivares told ABC News’ Rebecca Jarvis.

Many of the female coders “Nightline” met say they are outnumbered by their male counterparts at school.

“It’s just like three girls in the front row and then the rest of it is all guys. Basically feels like a guy’s club. So being here feels like a safe space,” 16-year-old camper Ivana said.

Sofia Ongele, 18, who started learning to code at the Kode With Klossy camp in 2016, added that one of her favorite things about the program is the network of women she can connect with to talk about coding. “I could just hit up my girlfriends any time that I wanted to and be like, ‘hey, help me out here.’ So that was really great.”

When creating the camps it was important to Kloss to focus on women. Today, while women make up more than half of college-educated workers, they only make up 25 percent of those in STEM fields, according to the U.S. Department of State.

“There are multiple problems too, I think, why more girls don’t get excited about tech or see themselves in that industry. A — barrier to entry of not having opportunities, not having a class to even take to learn the skills. And B — what society tells us or the image that we see and I think we need more visibility around women in the industry and they exist.”

With over 16 million followers across her social media platforms, Kloss is helping to increase the visibility around women in technology, showing that the stereotype surrounding STEM aren’t real.

“Everybody expected me to be one thing, to be on the catwalks or in magazines…And so I definitely think a lot of people noticed when I started coming out and talking about my love of science and math and more nerdy passions,” said Kloss. “I think that me standing up and kind of identifying my nerdy passions has ignited that for so many other girls and that impact is something that really drives me to want to keep being true to who I am, and supporting other young women.”

Watch more from Karlie Kloss on “Nightline” tonight at 12:35 a.m. ET and hear more of her interview on the ABC News podcast, “No Limits with Rebecca Jarvis.”