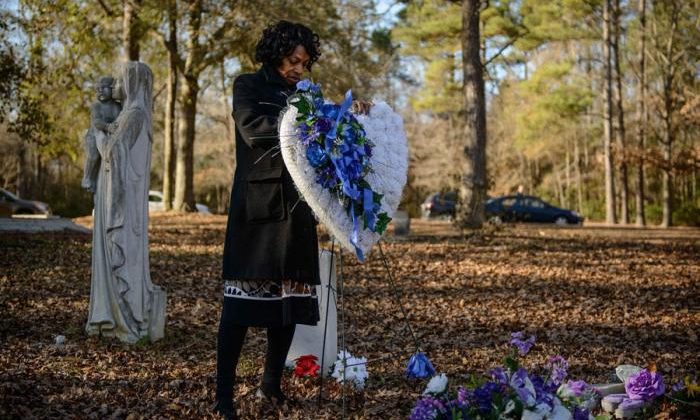 “Always in Season” asks a startling question: Could it be that lynching, one thing we think can be safely relegated to the pre-Civil Rights Movement era, is actually still practiced as a form of racial terrorism today? Jacqueline Olive’s documentary doesn’t provide a conclusive answer but certainly raises enough suspicion to trouble the mind. Focusing on a recent instance — and not a unique one — in which a young African-American man’s death was hastily pronounced a suicide, despite family doubts and questionable circumstances, this film offers an engrossing mix of history, investigation and activism.

One morning last August, Lennon Lee Lacy, an 18-year-old high school student in Bladenboro, N.C., was found hanging from a swing set. His friends and family were incredulous, believing he had plenty to live for and had shown no signs of suicidal despair. Older brother Pierre said the way the body was found — in the center of a mobile-home park (which Lennon often visited but didn’t live in) “looked like a display … a message.” Local police delayed investigation over the full course of a long holiday weekend, then pronounced the death a suicide after what others thought was a bizarrely cursory inquiry. Among factors police chose to disregard was a mortician’s opinion that the body showed signs of likely assault. The family also claimed Lennon was suspended from belts he didn’t own, wearing shoes that weren’t his.

Minuscule Bladenboro has a “laid-back, Andy Griffith feel” according to one local white citizen, who adds he hasn’t experienced any racial division. “Everybody gets along,” he maintains. He and other white residents, including the local newspaper editor, shrug off suggestions that Lennon’s death was anything but self-inflicted. Black citizens, however, have a different perspective. They’ve been targeted by regular police misconduct in the past. In fact, police in the region were busted not long ago for conducting a drug-running operation. One woman says that if the skeletons in the community’s race-relations closet were revealed, they would “scare you to death.”

It’s not until late in film that we learn something possibly crucial: Lennon was romantically involved with a white woman almost twice his age, and among those who disapproved was a drug-dealing white trailer-park denizen —who happens to be related to a local police officer.

Much of the documentary is taken up with the quest for “justice and closure” by Lennon’s mother Claudia, aided by an NAACP lawyer. While such satisfactions never arrive, the fight may not yet be over. In the meantime, the film brings lynching out from its hiding place in history books and into the light of the 21st century. Frequently appalling period texts (including an invitation to a “Hanging Bee,” recited by Danny Glover) confirm that the brutal act was often no secret but a highly public spectacle.

“Always in Season” has some aspects one wishes were more fully explored: We’re told quite a number of young black men have been found hanging in Southern parks in recent years, and that police quickly pronounce these to be suicides, but the doc doesn’t elaborate further. There are also hints Lennon may indeed have been under stress due to various factors, but in her sympathy for the family, Olive doesn’t delve deeply into this, either.

Yet the film’s flaws don’t significantly dim the power of the its general thesis that the past has never really disappeared in the South. While we see vintage footage here of KKK rallies and Klan-embraced politicians, we also hear reports, unsurprisingly, that white supremacist groups are on the rebound, often in the same areas where they thrived decades ago. They may have exchanged their white robes for new, often Nazi-inspired symbols, but the rhetoric is much the same.

Archival materials offer details of the gruesome past, and interviews and present-day reporting are nicely counterbalanced by moments of visual poetry that capture the lyrical aspects of rural Southern life — even as we suss out its less-than-sweet side. A notable contributor to the thoughtful assembly is a nuanced, diverse score by Osei Essed of New York City roots music band the Woes.