Global banking giant HSBC is being challenged by a 17-year-old student for promoting products supporting the Great Barrier Reef, while funding fossil fuel operations, including Adani’s Carmichael coal mine, that threaten to kill it by stoking climate change.

Ava Shearer, a part-time snorkelling guide who lives in Port Douglas and studies in Cairns, has lodged a complaint with Ad Standards, the body overseeing the self-regulated industry. 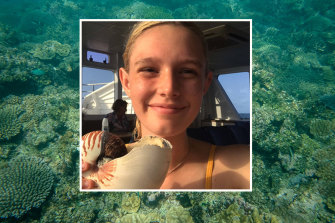 Ava Shearer, a Cairns-based student, has lodged a complaint against global banking giant HSBC for what she claims is “greenwashing” in its ads about the Great Barrier Reef.Credit:Eddie Jim, Supplied

She says HSBC’s ads, including its claim to be investing in the reef’s future and so-called “reef credits” to support water quality, are contradicted by its financial links to Adani and others.

“HSBC and financial institutions who fuel the climate crisis by funding fossil-fuel projects should not be allowed to get away with such blatant greenwash,” she said. “You shouldn’t lie to people.”

Ms Shearer, who plans to study marine biology after graduating from high school this year, said her company routinely took tourists to see both healthy reefs and those hit by coral bleaching after marine heatwaves in recent years.

“One site was pretty devastated,” she said, describing a recent visit. “A lot of the coral cover had disappeared.”

Data gathered by the Sunrise Project estimates HSBC has invested $110 billion in fossil fuels since 2016. It also claims public documents show HSBC holds $65.8 million in bonds and $4.3 million in shares of various Adani Group entities, including the unit that controls Adani’s coal export port in Bowen.

“We have raised these issues with HSBC directly and, if they want the public to take their commitments to protect the Great Barrier Reef seriously, they must withdraw their investments from Adani Group,” Cherry Muddle, a spokeswoman with the Australian Marine Conservation Society, said.

A spokeswoman for HSBC Australia said the bank was aware of Ms Shearer’s Ad Standard complaint, and it intended to respond.

“HSBC does not support the Carmichael coal mine project [and] we are not a direct investor in the Adani Group,” she said. “Our policies prohibit the financing of new coal-fired power projects anywhere in the world [and] the bank has committed to ending all coal financing in the OECD and EU by 2030 and globally by 2040.” 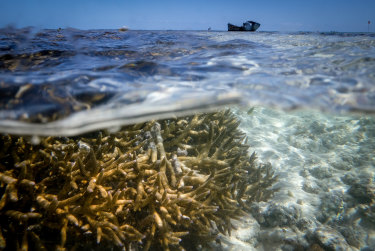 Bleaching of the Great Barrier Reef near Heron Island in 2016. Scientists say very little coral cover will remain even if global temperature increases are kept to even 1.5 degrees above pre-industrial times.Credit:Eddie Jim

A spokeswoman for Bravus, Adani’s renamed local operation, declined to comment about its finances.

“Completion of the Carmichael mine and rail project is on track to allow us to export coal to market this calendar year,” she said, adding that, so far, 2600 people had been working on site on the project.

A spokeswoman for Ad Standards said adjudication of the complaint was under way. So far this year, it had received fewer than 15 complaints related to environmental claims in advertising content. The code covers truthful and factual presentation, genuine benefit to the environment and substantiation of claims.

“The Environmental Claims Code is not designed to apply legal tests to determine whether an advertisement is misleading or deceptive, or likely to mislead or deceive, in areas of concern to this code,” the spokeswoman said.

“Instead, consideration is given to whether the average consumer in the target market would be likely to be misled or deceived by the material.“