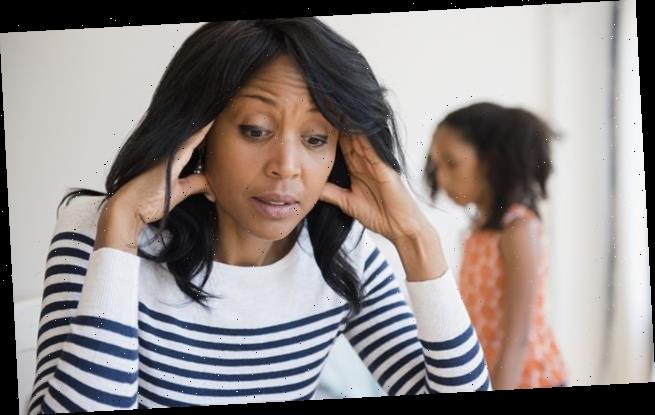 Do YOU regret having children? Struggling parents reveal why they wish they’d never started a family – including a mother who is exhausted by her kids’ ‘endless bizarre questions’

Do you ever regret having children? It’s a quandary no parent ever wants to find themselves in.

But some struggling mothers and fathers have laid bare the negative impact starting a family has had on their lives in an eye-opening online discussion.

Taking to the Q&A website Quora, parents from around the world openly discussed their feelings in a brutally honest thread, with some shedding light on how their own parents felt about them.

Some people bluntly admitted they regret having their children – though others were more positive, claiming their offspring ‘complete’ their lives. 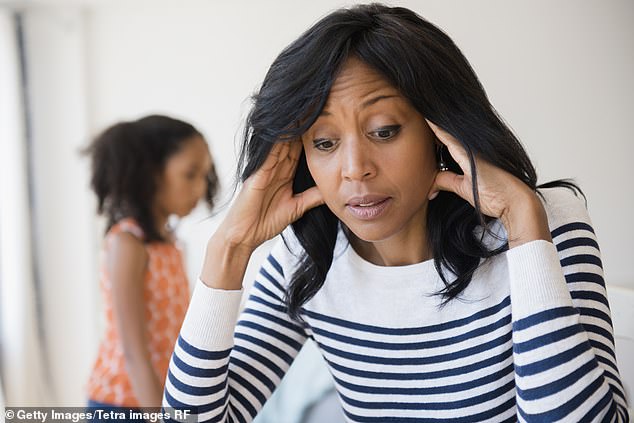 One contributor said that despite having four well-behaved and intelligent children, she regrets having them all because of the financial difficulty it has put her in.

She described how, before having children, she would enjoy reading, eating out at restaurants and treating herself to clothes, but now she buys her clothing from supermarkets and can’t remember the last time she read a book.

Mary said she is ’emotionally and physically drained’ and ‘miserable most days’, adding that her children either always need something or ask strange questions such as: ‘Can cats get herpes?’

She went on: ‘I try, I try so hard to be available for chats, I read to them each night, help with homework, boy trouble, career advice and hand out every penny that we both work so hard for to try and give them the best life possible. 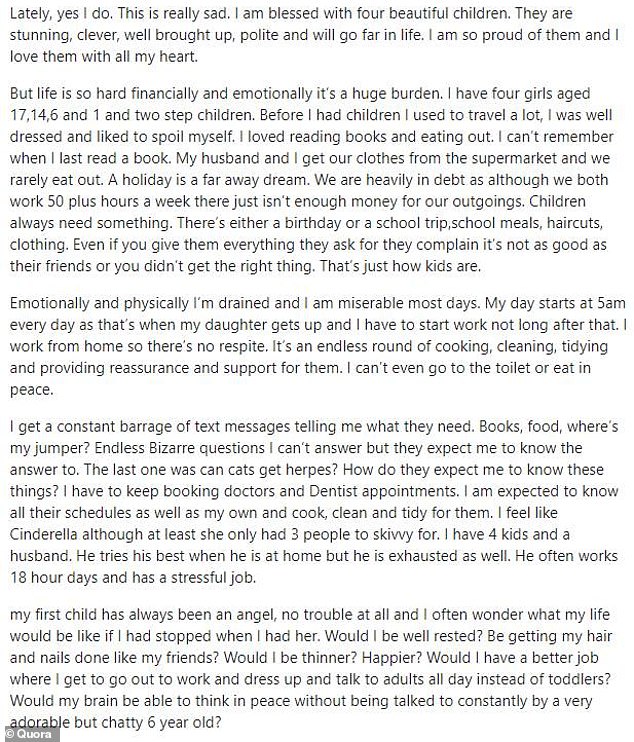 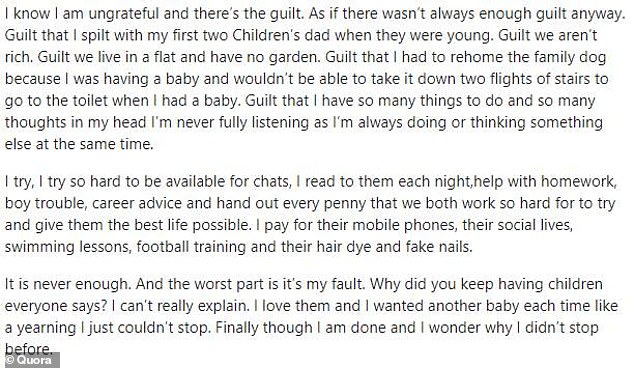 Mary Lees said that she regretted having her children because although she describes them as well-behaved and intelligent, raising them has drained her completely

‘I pay for their mobile phones, their social lives, swimming lessons, football training and their hair dye and fake nails. It is never enough.’

Despite the struggles of raising four children, Mary acknowledged that the decision to keep having more was hers and that each time she had one, there was a ‘yearning I just couldn’t stop’ to have another.

Another contirbutor, Jessica Davies, believed to be from the US, said she too regrets having her son, especially because she had never planned to start a family in the first place.

She said: ‘Never felt like it was my path or that I wanted to be a mom or that it made sense to bring a child into this world. And here I am with a toddler. 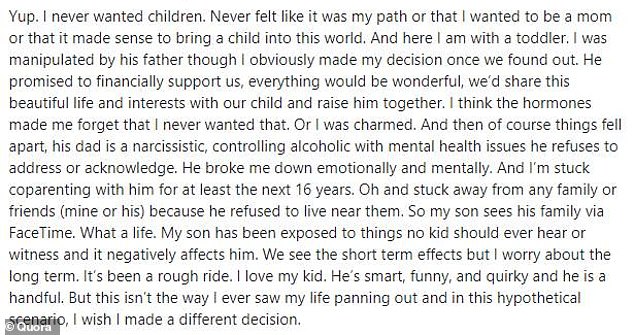 Another woman admitted she regretted having her child, but only because she was not given a choice in the matter and has been forced to raise him far away from her family

This mother-of-one said she wished she hadn’t had her son because he is still financially needy at the age of 35, despite being a father himself with his own home and career

A young woman said that she understands why her mother, 41, says she wishes she’d never had children because she’s never been able to live her own life 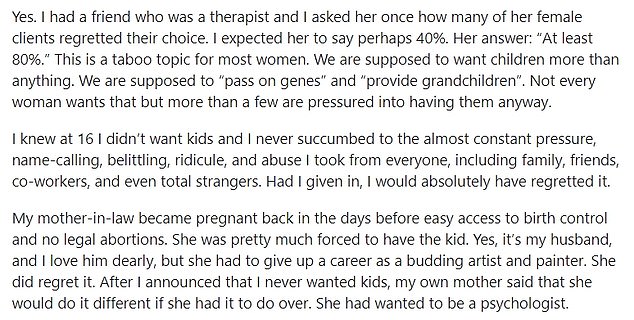 A differing view came from a mother who said she doesn’t regret having her son, but does wish he was growing up in a different kind of world

‘I was manipulated by his father though I obviously made my decision once we found out. He promised to financially support us, everything would be wonderful, we’d share this beautiful life and interests with our child and raise him together.

‘I think the hormones made me forget that I never wanted that. Or I was charmed.’

She said that one of the major problems she faces bringing up her son is that she lives far away from family because her child’s father refused to live near to them.

Despite regretting having had her child because her life hasn’t panned out the way she had imagined, Jessica said she still loves her ‘smart, funny and quirky’ child. 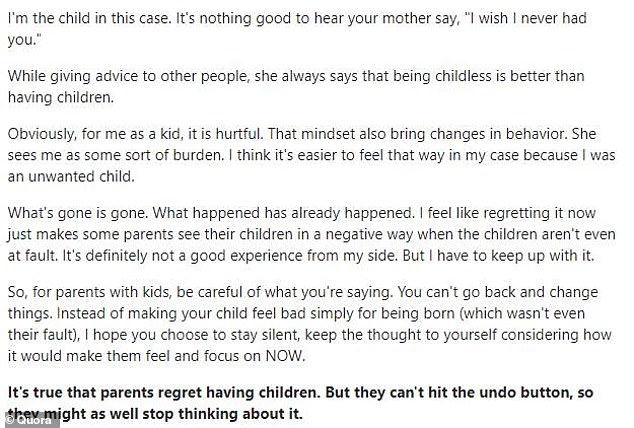 Arsha Thapa explained that she was the child her parents regretted having. She said her mother would often tell other people that being childless is a much better way of living

Sadly, one contributor admitted that her mother regretted having her.

Adding to the thread, Arsha Thapa said: ‘I’m the child in this case. It’s nothing good to hear your mother say, “I wish I never had you”.’

Arsha told how her mother always advises other people that being childless is a better way of living and that often upsets her.

‘What’s gone is gone,’ she said. ‘What happened has already happened. I feel like regretting it now just makes some parents see their children in a negative way when the children aren’t even at fault. It’s definitely not a good experience from my side. But I have to keep up with it. 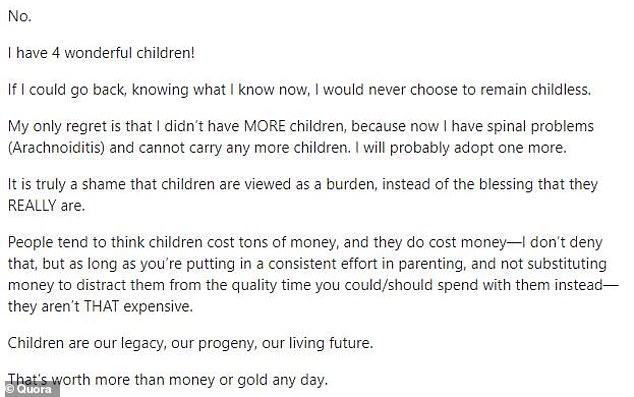 Violette LeFleur said she doesn’t regret having her four children; her only regret is that she hasn’t had more, though she would like to adopt

‘So, for parents with kids, be careful of what you’re saying. You can’t go back and change things.

‘Instead of making your child feel bad simply for being born (which wasn’t even their fault), I hope you choose to stay silent, keep the thought to yourself considering how it would make them feel and focus on NOW.’

Thankfully many contributors said they don’t regret having their children. Violette LeFleur revealed she has four wonderful children and that if she could go back to a time before she had them, she would never choose to be childless. 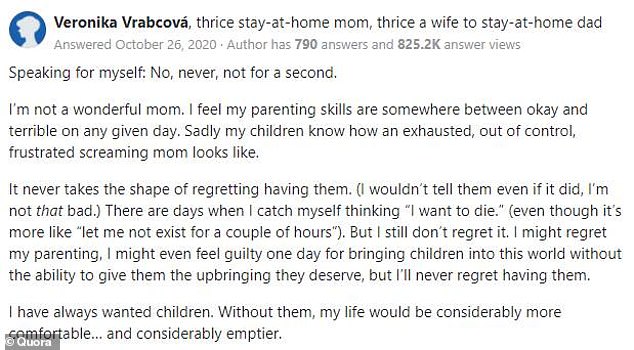 Veronika Vrabcová explained that although she doesn’t feel like a great mother, and that having no children would make life more comfortable, her kids complete her life

She said: ‘My only regret is that I didn’t have MORE children, because now I have spinal problems (Arachnoiditis) and cannot carry any more children. I will probably adopt one more.’

Violette acknowledged that children can be costly, but that if parents aren’t substituting quality parenting time with money then it isn’t as expensive as some people believe.

Meanwhile Veronika Vrabcová said she also doesn’t regret having her children because she has always wanted them – despite often feeling exhausted and ‘out of control’.

‘I might regret my parenting, I might even feel guilty one day for bringing children into this world without the ability to give them the upbringing they deserve, but I’ll never regret having them,’ she said.

Veronika added that while her children her life would be more comfortable without children, it would also be far more empty.