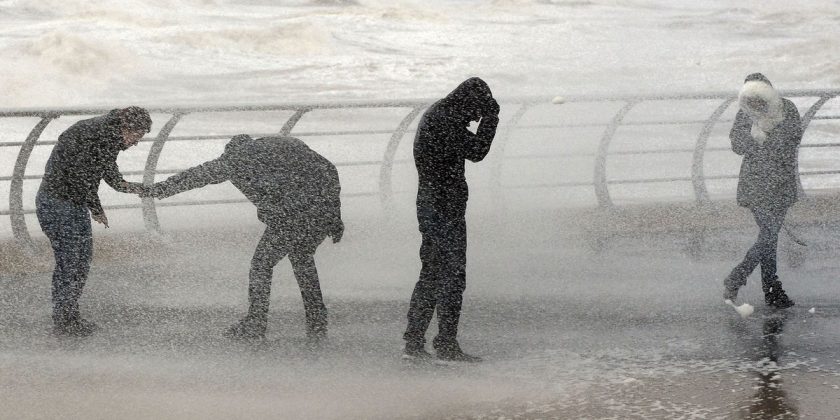 Homes and roads are at risk of flooding and millions of Britons could face travel disruption as Storm Diana threatens chaos across the country.

The storm’s major threats are heavy rain – up to 50mm in 12 hours – and 80mph winds that could damage property or topple trees or power lines over the next few days.

The Met Office has issued yellow ‘danger to life’ weather warnings for torrential downpours and powerful gales for large parts of the country.

Tuesday got off to a cold start with patchy frost and widespread fog and low cloud, especially in central and eastern areas, where drivers were warned to take care on motorways including the M3, M4 and M40.

Heavy rain will begin falling in the west and spread north-eastwards, accompanied by strong winds and coastal gales.

Similar conditions will continue overnight with further wind and rain arriving from the south-west as Diana – named by Portugal’s national weather service – sweeps in from the Atlantic.

Wednesday will be an extremely windy day for all of the country, with gales or severe gales, especially in the north and west, the Met Office said.

Rain is likely in most areas, with heaviest downpours expected in Scotland and Northern Ireland.

In one warning area for Scotland – affecting Perth and Kinross, Angus and Aberdeenshire – rain will be persistent, with accumulations of up to 50mm on high ground in just 12 hours, in addition to rainfall on Tuesday and melting snow.

Many places will see wind gusts of about 70mph.

Temperatures will be milder than last week, but it will be very wet and windy through the day and into Thursday.

Thursday’s strongest winds – up to 80mph – are expected in parts of south-west England and Wales, followed by north Wales and northern England a little later.

Temperatures could hit the mid-teens in some places in the south.

Friday is expected to be brighter but colder, with blustery showers.

More wind and rain is expected in the south and west on Saturday.

Meteorologist Alex Deakin told the Express: “It’s a bit warmer than last week, but it’s much wetter and at times it could be very windy, the potential for those winds especially to do some damage and cause some problems, especially through Wednesday and Thursday.

“We have warnings in force heavy rain at times too not helping the situation.”

Perhaps brighter for a time, but heavy rain already in the west, spreading northeastwards to most parts, accompanied by strong winds and coastal gales.

Rain will continue northeastwards, clearing into the North Sea, allowing a brief drier interlude with clear spells and patchy fog.

However, further wind and rain will arrive from the southwest.

A very windy day for all with gales or severe gales, especially in the north and west.

Rain likely for most, heaviest over Scotland and Northern Ireland.

Brighter but colder with on Friday blustery showers.

More wind and rain in the south and west on Saturday.