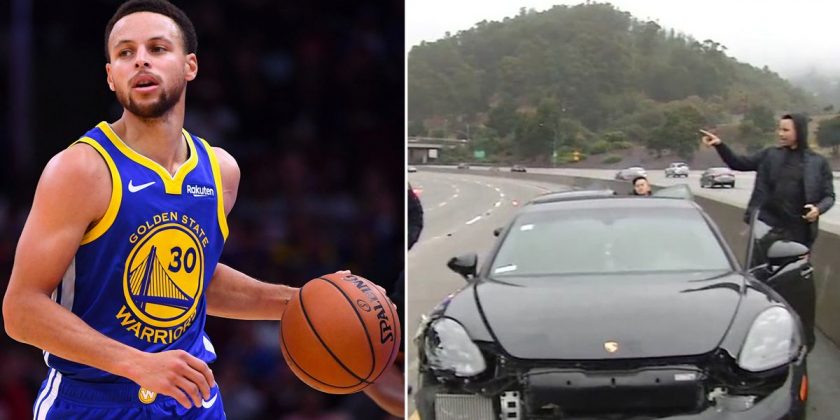 Steph Curry thankfully emerged unharmed after his £110,000 Porsche Panamera was damaged in a three-vehicle pile-up.

Early on Friday morning, the Golden State Warriors guard escaped unhurt after his car was hit by another that had spun out across the road before a second car rear-ended him.

The 30-year-old was seen talking to police officers at the scene of the incident in the Bay Area – believed to have happened around 9am.

Cops said afterwards that adverse weather was likely to have been the cause of the crash, which saw car debris from all three vehicles sprayed across the freeway.

It was raining in the 65mph zone but reports emerged that Curry was involved in TWO crashes with the second incident occurring ten minutes after the first collision.

An ambulance was scene at the scene but Curry, pictured with his hood up, appeared to be unhurt as he was stood opposite a law enforcement officer.

And Curry later summed up how lucky he was to leave unharmed, along with the other two drivers, as he posted a 22-word update to his well-wishers on Twitter.

His tweet prompted many relieved replies with his fans stating their happiness that the crash was not more serious.

One fan messaged: "Glad to hear Steph Curry is alright after the car crash, glad nothing major."

Despite the scare, Curry was seen happily posing for pictures at the scene of the crash alongside officers.

"Luckily everyone was wearing their seat belt and there were no injuries," said a  spokesman for the California Highway Agency.

"We’d like to remind everyone to wear their seat belts and slow down."

Curry is currently recovering from an unrelated groin injury.

But he is expected to take in the Warriors’ NBA clash with the Portland Trail Blazers at the Oracle Arena.

The Warriors will be hoping Curry returns to action soon.

The reigning NBA champions head into their game with the Trail Blazers in fifth place in the Western Conference on the back of a four-game losing streak.

For Curry, he will no doubt just be thankful that he is able to cheer on his team-mates after an eventful start to the day.