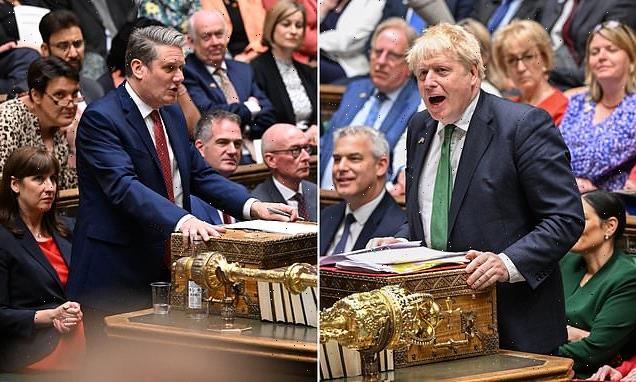 This was Keir Starmer’s chance to go for the Prime Minister’s gizzards. Instead, all he plunged into was tedium: HENRY DEEDES watches a relieved Boris Johnson getting a let-off at the despatch box

As Boris Johnson strode purposefully towards the House of Commons exit, he threw a triumphant upper-cut towards his backbenchers – shades of Joe Root punching the air after his comeback century at Lord’s on Sunday.

Mr Johnson’s performance at PMQs had been nowhere near as assured as Root’s heroics. Not even close.

But the sense of relief he must have felt after the letting-off he’d just received at the despatch box will have been far, far greater.

The session was supposed to be Sir Keir’s crowning moment. His chance to plunge the poignard deep into the PM’s gizzards and twist hard. MPs sensed they were about to witness a slaying.

Yet Labour’s leader held off. Rather than hammer the PM over his disastrous confidence vote, he asked a series of dull questions about the NHS. It was as though Monday’s no-confidence vote had never happened. Had he bottled it? Was he ‘frit’, as Mrs Thatcher liked to say? 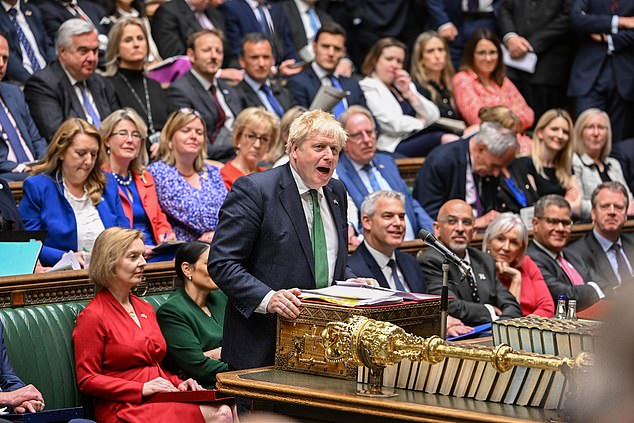 Boris branded Starmer’s attacks on the Government’s health record ‘satirical’. After the week from hell, I’m not sure he could believe his luck

Supporters of Sir Keir will probably claim he went easy on Boris on purpose. That Labour are better served by keeping him in place. I’m not sure I buy any of that. And if that is the case, then Starmer is even more of a political numpty than we first thought.

Voters want to see some killer instinct in their leaders, a bit of ruthlessness. Sooner or later, they are going to want to know what Starmer has to offer them beyond sanctimonious proclamations and a permanently blocked nose.

The PM, it should be said, was not looking his perkiest. Could you blame him? Dawdling behind the Speaker’s chair, there was none of his usual japing or tummy-poking.

When Tory party chairman Oliver Dowden appeared, Boris pulled a suggestive face at him as if to say ‘fancy taking one for the team, chief?’

The cheers which greeted the PM’s arrival were far from ecstatic. A National League crowd sort of roar at best. Many Tories sat in silence.

From Labour’s benches came a volley of pantomime boos. They were looking forward to this. Dame Angela Eagle (Lab, Wallasey) fired off an early shot. She wryly observed how loathed the Prime Minister is at the moment. ‘And that’s only in his own party,’ she quipped. Eagle fixed Johnson with one of her cannibal-toothed grins. (Incidentally, why is she not on Labour’s front bench? Discuss, as they say in academe.)

Enter Starmer. He had an oven-ready joke prepared, wondering aloud whether the Tories had been cheering or booing Boris when he’d arrived. As usual, he fluffed his lines by pretend-giggling before he’d even reached the punchline, revealing yet again what a stretch jokes are on his resources.

He started with a loosener on GP numbers, before proceeding to read long extracts from ex-Treasury minister Jesse Norman’s recent letter to the PM in which he accused him of lacking a plan.

If there was a question in there, I never heard it. We were barely ten minutes in and already the chamber was asphyxiated by boredom. It takes a certain talent to deaden such a prickled atmosphere in so short a space of time.

Sir Keir then began railing against the Government’s failure to fix inadequate hospitals. Tory MPs looked at each other quizzically. Where was he going with all this? As for Labour’s previously excitable benches, they’d by now dissolved into wild indifference.

Meanwhile, Boris was holding up pretty well. He branded Starmer’s attacks on the Government’s health record ‘satirical’. After the week from hell, I’m not sure he could believe his luck. 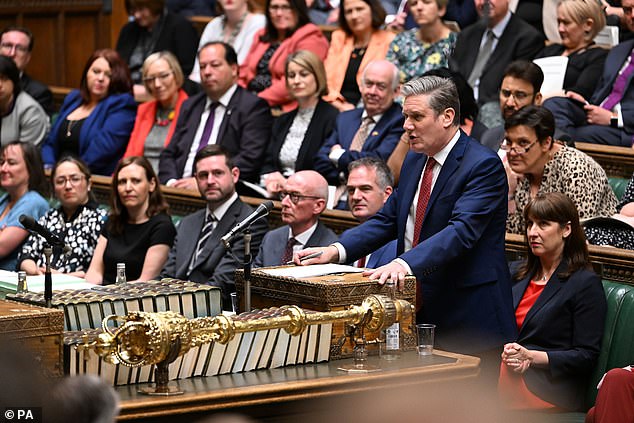 Two rows behind him sat Theresa May, her face a portrait of surgery waiting room glumness, possibly trying to work out how on earth he always seems to get away with it.

A question from Starmer about NHS contracts followed which was so technical I’m not sure anyone without a medical degree would have even understood it.

‘This line of attack isn’t working,’ sighed Boris. For once, almost the entire House was in agreement with him.

The SNP’s Ian Blackford compared the PM after his confidence vote to Monty Python’s hapless Black Knight who insouciantly claimed his mortal injuries were ‘only a flesh wound’.

Boris smiled. ‘Barely a flesh wound,’ he muttered to himself. Deluded? Maybe so. But on this showing, he won’t going quietly.