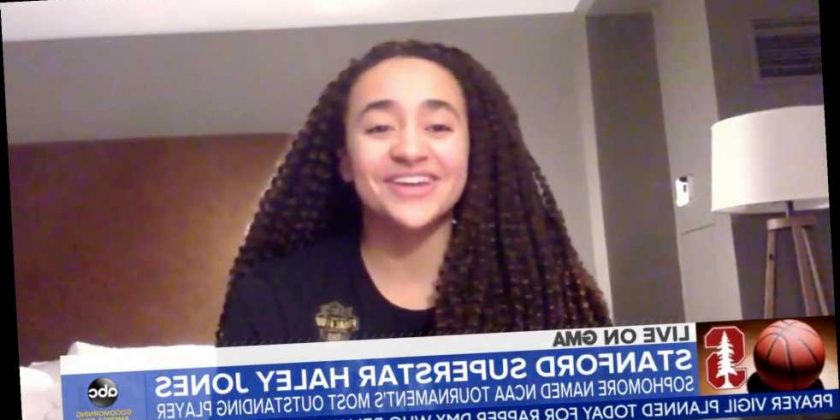 On Monday, Jones, who was named the tournament's most outstanding player, appeared on Good Morning America to discuss the nail-biting game and unprecedented season.

The Stanford sophomore admitted that she "had no sleep" following the exciting win and was "still on a high" this morning.

In the last few seconds of Sunday's game in San Antonio, Wildcats star Aari McDonald missed a three-point shot that would have won Arizona the game.

Asked about what was going through Jones' mind when McDonald took the shot, the athlete said it was "blank."

"Aari's an amazing player so we knew the ball was gonna be in her hands," she said. "We threw as many defendants as we could at her, but I just knew it was out of my hands." "Thankfully it didn't go in but it was happening in slow motion and then I just got to go hug my team once I saw the ball come off the rim," Jones added.

Jones also spoke about her team having a difficult season due to the coronavirus pandemic.

"Our media coordinator always made a joke that we were homeless and we just kind of stuck by it," Jones said of her team being displaced for two months during the season.

"We've been through a lot, we were pretty relentless this year but we were on the road for two months and we just grew closer and we're just resilient," she said. "It feels surreal to be here now."

While accepting the honor after Sunday's game, Jones credited her teammates for giving her confidence. The women's championship game follows a turbulent few months for the NCAA as the organization was criticized for the inequities between its men's and women's teams.

Last month, the NCAA provided ESPN and the New York Times with previous tournament budgets for the first time, which showed a $13.5 million budget gap between its men's and women's tournaments.