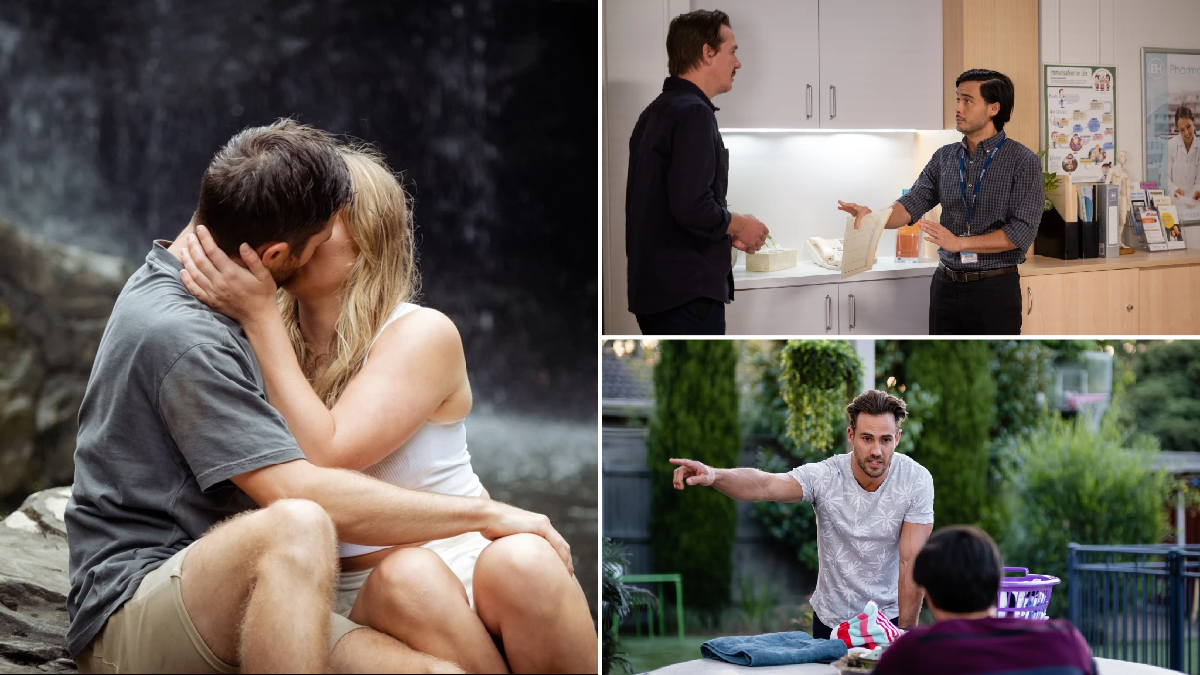 The events at River Bend have left a path of destruction in Neighbours; Aaron (Matt Wilson) has life-threatening injuries, Glen’s (Richard Huggett) secret is about to come out, Ned (Ben Hall) cheats on Amy (Jacinta Stapleton), and David (Takaya Honda) is responsible for a death.

That was quite the holiday.

Aaron was beaten to within an inch of his life by psycho Gareth, and though he’s rushed to hospital, his injuries are extensive. David is with him when he suddenly takes a turn for the worse, is David about to watch him die?

David, meanwhile, is embattled by the knowledge of his crimes – kissing Dean and killing Gareth by withholding medical interventions. As he watches his husband’s life slip away, will it all become too much for him to keep his truths a secret?

Glen has been harbouring his own secret and it’s one that, after a bit of an emotional push, comes spilling out.

And Ned and Harlow (Jemma Donovan) take advantage of being lost in the bush with no one around to save them by getting hot and heavy in a waterfall. Amy will probably end up wishing they’d been left there?

Aaron’s injuries are incredibly serious, and things are already looking good when all of a sudden his health takes a sharp decline. As he takes a turn for the worse, it looks like he really might die. He’s rushed into emergency surgery, will he pull through?

Glen can’t stop thinking about Kiri and finally breaks, letting Terese in on the secret that she’s his daughter. But as he says it out loud, he realises he can’t tell anyone else, he must keep it a secret. But though he makes his decision, he finds himself yearning to begin a relationship with his long-lost daughter.

David feels terrible about his part in Gareth’s death as he believes he could have easily saved him. Freya reminds him he was dying anyway and that it’s not David’s fault. He can’t hear it though, and his confession is close to seeing the light of day. A coronial investigation begins into Gareth’s death and David starts to sweat. He and Freya are questioned once, but he’s terrified to learn they need to be interviewed again. Freya can see David is close to cracking, will he confess to what they did?

Sexy times for Ned and Harlow

Little do the Neighbours know, Harlow and Ned are lost in the bush and are growing more and more terrified. It gets cold and the pair huddle together for warmth, but decide they need to find shelter before nightfall. They find a waterfall and their closeness starts to turn into something. Pulses racing and alone with no apparent source of rescue, believing they might die, the couple give in and get steamy.

After their little dalliance in the waterfall, Ned and Harlow are found safe and sound. But Ned’s head has been left in a mess. He can’t deny his new feelings for Harlow, but is there still something there with Amy? She’s been trying so hard to win him back. Amy is pushing for an answer over whether they can be together again, and Ned is torn, but when Amy brings out the big guns and woos him with a huge gesture, he realises how deeply he feels for her. Will he give Harlow the brush off? And if he does, will she accept it quietly?

David has another secret up his sleeve and with so many lies being suppressed, something is bound to slip soon. While Aaron fights for life in emergency surgery, David is struggling to cope. But as Aaron pulls through this latest threat to his life, David learns that Dean has already confessed to Aaron about the kiss. David is furious, and vows to report Dean for his behaviour. But what will this mean for David Aaron, has Aaron just survived a brush with death only for his life to fall apart?