Labor leader Anthony Albanese has vowed to revive a “spirit of consensus” between unions and employers to lift wages and profits in an economic pitch to industry leaders that emphasised his willingness to tackle major reform if he wins power at the election.

In his most detailed speech on the economy in the campaign so far, Albanese accepted warnings from experts that the only way to increase wages over the long term was to lift the nation’s productivity. 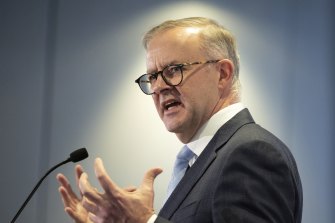 Anthony Albanese named universal childcare as the legacy he would like to leave if he became prime minister.Credit:Alex Ellinghausen

He also named universal childcare as the legacy he would like to leave if he became prime minister, ranking it alongside achievements from earlier Labor prime ministers including Medicare under Bob Hawke, universal superannuation under Paul Keating, the national broadband network under Kevin Rudd and the national disability insurance scheme under Julia Gillard.

But he ruled out major tax reform and instead promised economic change by bringing more women into the workforce, investing in renewable energy, encouraging domestic manufacturing and turning more Australian science into business.

“A Labor government I lead will reinvigorate Australia’s enterprise bargaining system to promote productivity,” he told business leaders at the Australian Chamber of Commerce and Industry in Sydney on Thursday.

“We must rediscover the spirit of consensus that Bob Hawke used to bring together governments, trade unions, businesses and civil society around their shared aims of growth and job creation.

“Bringing business and unions together at the enterprise bargaining table, with productivity gains as a focal point, is the only way we can increase both profits and wages without inflationary pressure.

“Our ambition of a new consensus will extend to small businesses and the people who work in them too.”

Albanese set out his plan to an audience that included Keating and ACCI chief Andrew McKellar as well as 130 business leaders from the industry group.

Albanese has vowed to convene an employment summit if he wins the election, saying it would bring employers and unions together to make sure enterprise bargaining works effectively. He has also promised a white paper on the labour market to commence workplace relations reforms.

While he has already named policies such as stopping wage theft and stamping out insecure work, he used the speech to set out a broader agenda that promised economic reform in combination with a “social dividend” through spending on childcare and aged care.

A key policy is a $15 billion National Reconstruction Fund that would invest in new industries with a goal of creating 1.2 million tech-related jobs by 2030. Labor is also promising 465,000 fee-free TAFE places and 20,000 additional university places in areas of skill shortage.

On women’s economic participation, Albanese made a case for lifting economic growth by making it easier for women to pursue families and careers.

“Women are under-utilised, undervalued and underpaid and too often disrespected,” he said. “Enhancing economic opportunity for women is the right thing to do. And it is in our national interest.”

The mechanisms to achieve this in the Labor policy agenda include making gender pay equity an objective of the Fair Work Act, setting up expert panels on pay equity and the care and community sector, and overhauling childcare with greater subsidies to make it more viable for women to return to work after having children.

Asked by audience members about fixing labour shortages, Albanese emphasised his plan to spend on training but said he was “up for debates” with business about migration. Quizzed on the prospect of a tax review in the next term of parliament, he ruled it out. On local manufacturing, he aired an ambition to build major capital items such as trains in Australia on the grounds it was cheaper than buying them from overseas.

Albanese cited a profile of Scott Morrison in The Sydney Morning Herald and The Age in January, in which the prime minister said he had not given any thought to his legacy, to set up a contrast over which of the two leaders had a vision for the nation.

“My opponent declared he did not want to leave a legacy – and doesn’t it show?” Albanese said. “I do. And that’s why I’m running for prime minister.

“I want to add universal affordable childcare to the list of universal provision of Medicare and superannuation of which Labor is proud.”

Albanese also returned to the theme of lifting wages through productivity by speaking of the families he knew when growing up in social housing in Camperdown in Sydney.

“They don’t use words like reform or productivity,” he said. “But what they need from our nation’s leaders is what only economic reform and increased productivity can deliver.

“They just want to get ahead. Be rewarded for their hard work. Live a good life. Set their kids up to fulfil their potential. To make that possible, they need a better government.”