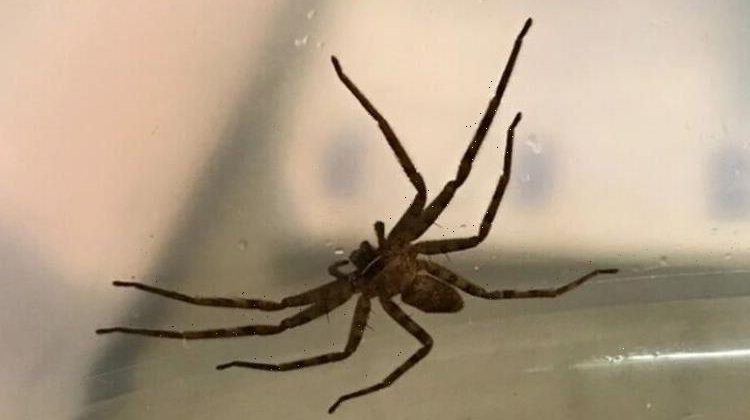 The huntsman spider has been known to grow up to a horrifying foot wide. The specimen made the 5,000 miles journey from China to Hull, hidden in a shipping container until it was spotted by panicked dock workers.

The beast is thought to have spent a month travelling in the container across the world.

Staff quickly gave the creature a wide berth, immediately calling in the expertise of the RSPCA.

Officials then captured the spider and removed it from the area.

The spider, although not typically deadly to humans, can spark a host of serious health conditions in humans if a person is unfortunate enough to be bitten by one.

A spokesperson for the RSPCA joked: “The spider fancied a holiday so he hopped on a shipping container in China and ended up in Hull.”

He added: “He gave staff quite a fright.

“He’s now having some R&R at a specialist rescue centre.”

This is not the first time a huntsman spider has hitchhiked to the UK in a shipping container.

In 2020, a giant huntsman was detected in a shipment of chairs that had made its way to the UK from China.

Staff in a warehouse in Southwold, Suffolk, trapped the spider in a container before calling in the experts.

Inspector Jason Finch warned at the time that such an event was not unlikely, with arachnid stowaways showing up in the UK “quite often”.

He said: “These creatures are often picked up by mistake and end up being shut inside containers or boxes.”

He added: “Huntsman spiders can grow up to 12ins in leg span so are a large variety.

“This spider was on the smaller side and was only around 2.5in from leg to leg.

“He’d obviously been in the container for some time, without access to food and water, but he was still active and seemed to be OK.”

He warned: “Huntsman spiders are venomous but are not dangerous to people although they can give a nasty bite so we would always advise caution around them.”

Luckily for Brits, huntsman spiders are not native to the UK.

They also cannot be released into the UK countryside under the 1981 Wildlife and Countryside Act.

The creepy-crawlies earned their name from how they capture their food, opting to track down their prey rather than ensnaring them in webs.ite the stresses of the COVID-19 pan