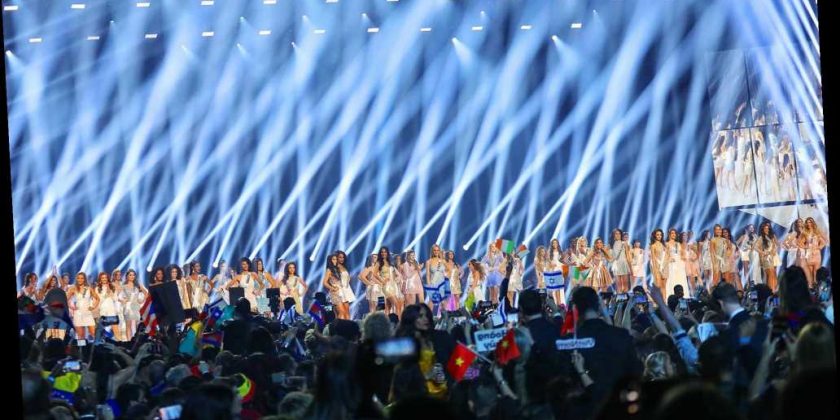 Sunday night’s Miss Universe competition was nearly over when the man sitting next to me really started to sweat.

Pageants are still a big deal in the U.S., in their way — Miss America airs on NBC, Miss USA on Fox — but whatever kind of deal they are here, they are double, triple, quadruple, quintuple that important elsewhere in the world, especially in Latin America and Southeast Asia, to judge by the crowd at Sunday’s show.

Sure, Miss USA Cheslie Kryst, an attorney and former TV correspondent, drew enthusiastic reactions. But, at least to my ears somewhere in the middle of the crowd, everyone really went wild for Misses Colombia and Puerto Rico, with Miss South Africa, Miss Thailand, Miss Mexico and Miss Peru drawing their own screams and shouts.

As for Miss Puerto Rico Madison Anderson, who came in second? Her fans must still be hoarse.

“We love this,” the Miss Puerto Rico fan sitting next to me said at one point, after I congratulated him — it seemed only right, like he had had something to do with her success — as she continued to progress in the pageant. He had only traveled to Atlanta from Philadelphia, but he was with a companion who had come from Puerto Rico proper, bringing hometown zeal.

Later in the show, his mood had darkened.

“I’m so nervous!” he said to no one and also to everyone, the thousands of other people in a large soundstage at Tyler Perry Studios in Atlanta who knew exactly how he felt.

Here’s what else you didn’t see at Sunday’s show.

About those Miss Colombia jokes … and that one flub

Host Steve Harvey will be the first one to laugh at himself: Up top at Sunday’s show — and even before — he and others were making jokes about his notorious flub in 2015 in which he wrongly announced Miss Colombia as that year’s winner, instead of Miss Philippines.

Before cameras started rolling, the warmup comedian warned the audience not to block the teleprompter at the back of the room with their signs and flags — “we all know, dammit, we need Steve to read.”

“Y’all never did let go of that Miss Colombia thing,” Harvey said in his show opener. Later, when he brought Miss Colombia up with him to the front of the stage, he playfully showed off the cue card to prove he had read it correctly. “You’re forgiven,” she told him with a smile.

Then he quipped about “the cartel” being less forgiving, which some online saw as disrespectful. The Colombian fans in the room, however, didn’t seem to mind it. And when Harvey made a crack about his 2015 error in his opener, one large cheering section near me responded only by cheering and dancing louder.

When the audience did react? Through some apparent mix-up in production or orchestration, Harvey was announcing the National Costume winner as Miss Philippines while standing next to Miss Malaysia. Both she and some audience members corrected him, though a Miss Universe official said later that Harvey had it right: Miss Philippines did win, as he said. It seems the confusion was because Miss Malaysia had come out to join him in her own eye-popping costume — perhaps because Miss Philippines was still in the running at that point and unavailable herself.

All about the crown

Designed by A-list jewelry house Mouawad, the 166-carat “Power of Unity” crown is, if possible, shinier in person. But what else could it be with 1,770 diamonds wrapped around a massive shield-cut 63-carat golden canary diamond?

The whole thing is valued at $5 million.

What’s going on backstage and after the show

It’s a good thing, and it always comes together, but as Miss Universe President Paula Shugart told PEOPLE on Sunday, “This show has been a lot of craziness.” She compared it to a duck paddling: serene above the water, just moving along, but all motion underneath. (And a lot of butt glue, as one former queen told PEOPLE of what goes on backstage, joking, “They can’t be having those swim suits riding up.”)

Fifth Harmony’s Ally Brooke, who performed two numbers, says the second dress she sang in — a shimmering black number — was, thanks to “the magic of the show,” chosen just that morning after she was asked to sing again at the last minute. Meanwhile, YouTuber Patrick Starrr, who appeared on a live-streamed panel in the CHI Lounge during the show, was in a matching ruffled dress and turban that took him eight hours to complete from head to toe. (Pro tip: His earrings were glued to his turban.)

Ahead of the show, 2018 Miss Universe Catriona Gray told PEOPLE she had this advice for the new champ: “I just want to tell them to brace themselves because their lives will change and to understand the responsibility that comes with this amazing opportunity.”

As for how she’s kept going through her own year-long reign?

“I do have a talent of napping whenever I can,” she said, “but also I really love the work that I do.”

Now that work will be continued by Miss South Africa Zozibini Tunzi, whose entire everything just changed.

“She doesn’t fly home,” Shugart, the Miss Universe president, told PEOPLE on Sunday. “All of her belongings will move out of her room mysteriously, she never goes back to her room. She ends up in a presidential suite and then tomorrow she flies to New York and she has her new home and her life is never the same.”

For her part, Tunzi later told reporters she was “so ecstatic” about the win, which came after delivering emphatic statements about the need to fight climate change and the importance of diversity in how we talk about what is great and beautiful and strong in the world.

Tunzi said late Sunday she hadn’t yet had a chance to catch up with her family, some of whom were with her in Atlanta and watching in the audience. She said she expected “a storm of news” as South Africa woke up.

“I believe that whatever we put into the universe always come back to us and I think that if we all work together and do all that we can, truly we can make a change,” she said.

For the 89 other women, many trailblazers in their own way, Sunday was a weird kind of defeat: one wrapped in victory, having made it to that stage at all … followed, for some, by a sweet treat or two.

“I got to watch everybody during dress rehearsals and I know how hard [Miss USA] Cheslie been working, especially living with her part-time,” Miss Teen USA Kaliegh Garris said Sunday before the show. “So it’s super exciting to see all of her hard work pay off and I’m really excited for the show to be over as well — ’cause I know she’s going to eat some brownies tonight.”