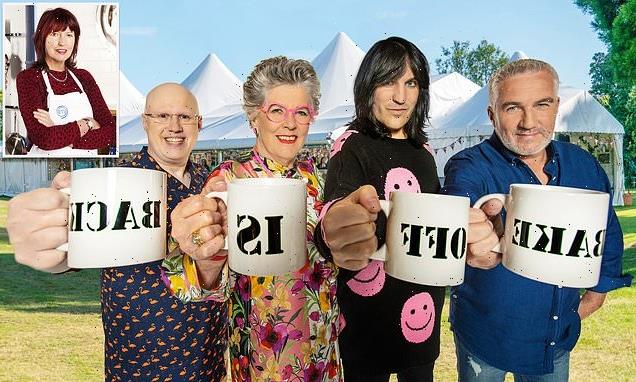 Spare me the soggy bottoms – Bake Off’s more about showoffs than showstoppers: Celeb Masterchef winner Janet Street-Porter says she won’t tune in when the series returns

The Great British Bake Off has become a national institution, like the Chelsea Flower Show, The Grand National and the Changing of the Guard. The show has even been turned into a musical, but I won’t be going. Nor will I tune in when it returns to screens this month.

Unlike millions of devoted fans (6.9million watched last year’s final), I don’t swoon over Paul Hollywood or hang on Prue Leith’s every word. Nice people, shame about the silly competition, which is desperately trying to elevate the simple act of making a cake into a triumph of artistic endeavour.

The modern Cult of Cake has completely passed me by, and as a consequence I have time for other, more rewarding pleasures than spending hours mixing up butter, eggs and flour into something that will be demolished in minutes and certainly add to the acreage around my waist.

In short, I’ve decided Life is Too Short to Bake a Cake. I realise my position is heresy. Baking is what every real woman should be doing for her family to show she loves them. That was the received wisdom in post-war Britain. 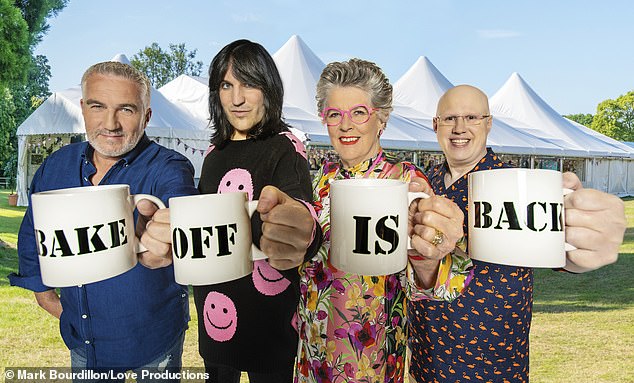 Team Bake Off: From left, Paul, Noel, Prue and Matt. The Great British Bake Off has become a national institution and is back on our screens

Cooking classes at my secondary school involved whipping up a tray of fairy cakes before you had learned anything about nutrition or basic meal preparation. Cakes were more important than devising an economical but warming stew, a nourishing risotto or pasta dish. In the 1950s, cake-making was part of our national DNA. #

Every woman knew the basics — passed on from their mum, who had learned the rules from hers. My mother baked a simple sponge cake every Saturday afternoon. It was part of the weekend ritual in our small terraced house. That task would take her a couple of hours, and by the end of Sunday afternoon the delicious product of all that effort was gone.

Mum could have spent those hours reading, going to the cinema, gardening or just luxuriating in a spot of downtime. She worked as a dinner lady then in Marks & Spencer. My father was an electrician and money was short. She must have been desperate for a bit of a rest.

Yet week in and week out, she was bamboozled (by Dad and the then conventions) into making a cake, when perfectly decent ones were available at the baker’s a few yards from our house in Fulham, west London. 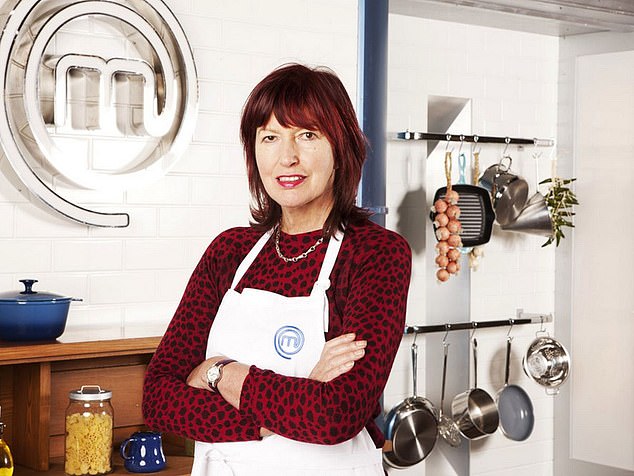 Janet Street-Porter (pictured) says that Bake Off is a silly competition that she won’t watch. The Celebrity Masterchef winner says that life is too short to bake cakes

In our small towns and villages, baking was (and still is) considered an entry point to the WI, and country shows hold fiercely contested Victoria sponge competitions. There was outrage at my local Kilnsey Show in North Yorkshire many years ago when most of the cake prizes were won by a young man training to be a baker.

Choices made by the judges resulted in snide comments about ‘semi-professionals’ — as if cake-making was a hallowed craft that only one woman could pass down to another.

But the fancy — even ludicrous — concoctions today’s Bake Off contestants have to dream up to impress judges Paul and Prue are miles away from my mum’s humble Victoria sponge.

Long before Bake Off launched on BBC2 in 2010, Nigella introduced us to the idea of sexy baking as TV entertainment — though, to be fair, she always emphasised how easy and quick most of her favourite recipes were. 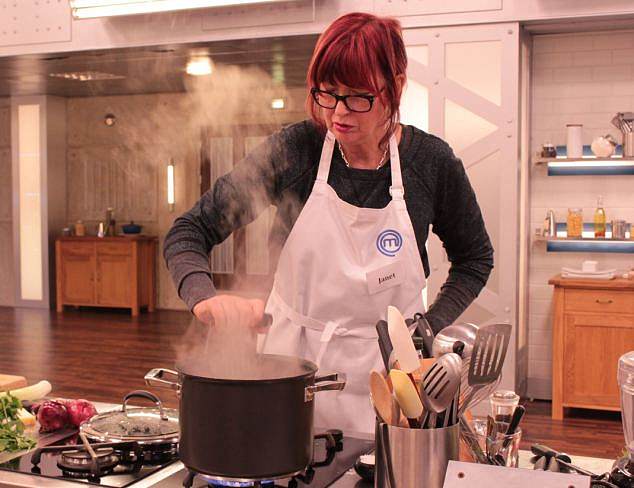 Jane says the best cakes are simple. There’s a world of difference between baking an elegant tarte tatin, and creating a grotesque caterpillar or pink pig out of marzipan and food colouring

But the arrival of Bake Off signalled the start of a new era. Making a cake was turned into a highly competitive spectator sport. Sure, taste and texture had to come up to scratch, but looks were everything. Cakes looked like boats, chessboards, cats and dogs. I managed the first couple of series on an occasional basis, and then I had enough, so stopped watching.

The best cakes are simple. There’s a world of difference between baking an elegant tarte tatin, and creating a grotesque caterpillar or pink pig out of marzipan and food colouring.

It’s TV entertainment for people who can’t cook, armchair experts who tune in to scoff at the failures and the flops. Not to mention it’s a great excuse to eat yet more junk food: biscuits, strudel, doughnuts — whatever the bakers happen to be making that week.

Growing up in the 1960s, women like me were too busy having fun, taking the Pill and partying to bake a cake. The kind of men we hoped to snare were far more interested in our short skirts than our ability to whip up a Swiss roll.

My favourite cake was a Battenberg — a pink and yellow concoction bought for about 30p at the supermarket. Or Sara Lee brownies, which came frozen in a foil tray that you could pop in the oven then pass off as a homemade dessert, slathered in ice cream. 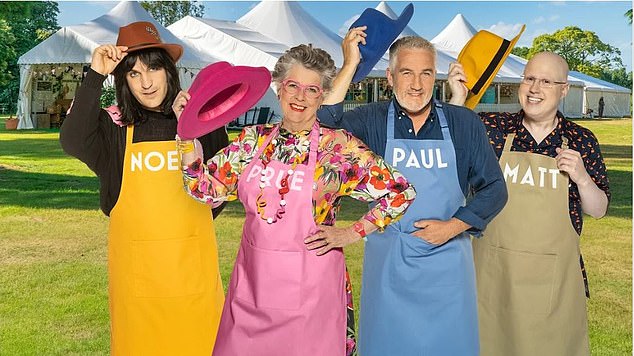 The first and last cake I made was my wedding cake, back in the Summer of Love, 1967. This historic item was a two-tiered fruit cake that wasn’t at all bad. I covered the layers in marzipan and icing, stuck a little bride and groom on the top and embellished it with a few Smarties.

Since then, I’ve not bothered. None of my four husbands ever expected me to conjure up a homemade cake. Instead, I concentrated on learning how to cook Mediterranean and Middle ­Eastern comfort food, which was quick and easy to assemble, as well as being far healthier.

Even so, I have been runner-up in Celebrity MasterChef and won their Christmas Special in 2020 — all without baking a cake!

As the way to my heart will never be via cake, I have never dated a man who lists baking as one of his top talents. Oddly enough, there are suddenly a lot more of those about. The past four winners of Bake Off have been men — Rahul, David, Peter and, most recently, Giuseppe, in 2021.

Post-Covid, most men I meet have turned to sourdough breadmaking as a way of exhibiting their hidden strengths. They drone on about their secrets and their ‘oven bounce’ on WhatsApp groups and bore you to death agonising over their troubled starter and their attempts to bring it back to life. (Could it be an analogy for another bit of their anatomy, I wonder?)

But these modern men aren’t making bread to feed a working-class family, as my mum was. Instead, the ritual of the sourdough starter is as macho as tuning a highperformance car, a chance to show off.

Still, I seem to be alone in finding modern baking a turn-off. GBBO goes from strength to strength. We are now on series 13, the show — now hosted by Noel Fielding and Matt Lucas — has switched from the BBC to Channel 4, and shows no signs of fatigue.

The programme has been sold all over the world, from Brazil and Belgium to Australia and the U.S. Notably the rise of the Cult of Cake coincides with a global rise in obesity in all countries where the show is broadcast. Don’t tell me the two are not linked.

Bake Off pretends to be about technique and talent, but it’s really about showing off. How on earth do you judge one silly cake against another? It’s as daft as pitting pole-vaulters against sprinters, tap dancers against swimmers.

And, given the parlous state of the nation’s health, isn’t our obsession with cake just another excuse to put off the day when we start to eat healthily and finally cut down on the sugar?

So spare me the soggy bottoms, the tears and the teetering showstoppers. For me, Bake Off’s time is well and truly up.