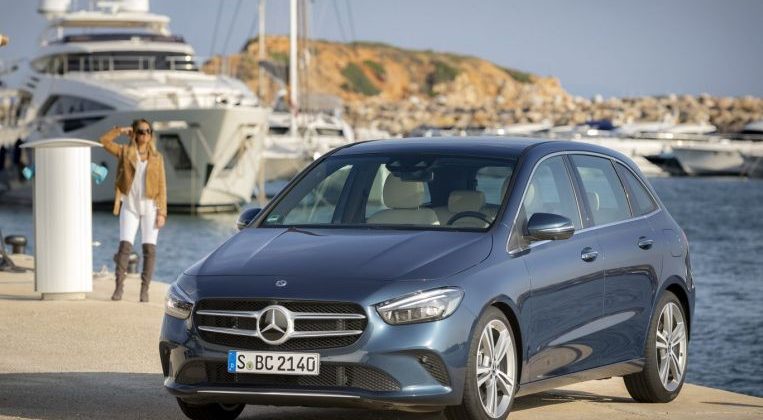 As night follows day, so B follows A. Hot on the heels of the all-new A-class which Mercedes-Benz unveiled earlier this year is, predictably, an all-new B-class.

The new iteration of Mercedes’ five-seater mini-MPV looks like an A-class hatch that has ballooned in all directions.

Still, it is sleeker than its utilitarian-looking predecessor, thanks to a 4mm lower roofline, a 26mm addition to body length and a wheelbase stretched by 30mm. The B-class also looks rounder and cuddlier than the leaner, meaner A-class, reflecting its more family-oriented focus. Think of it as an A-class with a dad bod.

Space inside is ample, with elbow room increased by up to 33mm, even though the car’s body itself is only 10mm wider than before, and a touch more headroom despite the slightly lower roofline. There is legroom to stretch at the back, the boot is capacious and well-shaped (albeit slightly smaller than before), and there are multiple storage options all around the cabin.

The fascia design mirrors that of the new A-class, with a free-standing rectangular screen sitting atop the dashboard and spanning half its width, containing a configurable instrument display (in front of the driver) and interactive infotainment and ventilation touchscreen displays (above the central air vents).

The infotainment system comes with “intelligent” voice command, which responds to instructions given in casual conversational language rather than rigid, pre-programmed commands. For instance, it will understand “I’d like some music” and not just “turn on the radio”.

Price: To be announced when it arrives in first half of next year

But, no, it has not grasped Singlish.

The cabin looks lovely – certainly the best in its class by far – with the circular “jet turbine” air vents, door handles, grab handles and some switchgear finished in matt chrome, and premium-feeling materials.

Slightly detracting from this, however, are the skinny and fragile-feeling column stalks for indicator, wipers and gear selector.

The driving position is markedly better than before, with the pedals no longer too near to the driver’s seat. But a relatively high seat feels rather perch-like, although Mercedes says it deliberately made the driving position 9mm higher than that of the A-class.

The car comes with a suite of safety and driver-assist features that are mostly from models higher up the range, such as the S-class. Using a battery of sensors, they will help you brake, change lane, evade obstacles, maintain distance in traffic, warn you of other vehicles in your blindspot, prevent the car from reversing if it detects traffic approaching from the side, dip or raise the headlights as needed depending on conditions, and many other clever things.

The Park Assist self-parking feature is particularly nifty. Where other similar systems can steer and brake for you, Mercedes’ system goes one step further by automatically toggling between forward and reverse gears as the car shuffles itself back and forth into the space.

When the B-class goes on sale here next year, it will be available as the B200, powered by a 1.33-litre turbocharged 163bhp four-pot married to a seven-speed dual-clutch gearbox driving the front wheels – a combination already seen on the A200. The century sprint is dispatched in a swift 8.2 seconds.

During the test drive, the engine proves usefully torquey at low-to-mid revs, allowing swift progress in town traffic. But it starts to sound coarse past 4,000rpm, discouraging hard driving. Take things easy and the cabin is a refined place, with road and wind noise well-subdued.

Indeed, the car seems to encourage an unhurried gait. The ride is incredibly supple over even the worst roads, even with the (optional) adaptive damping in its firmer Sport mode. It is a vast improvement over the old B-class, which was unsettled by the slightest of bumps. In fact, it is so cushy in Sport mode that Comfort mode, which also introduces some float and heave over undulations, is redundant.

Steering response is slow. Even slight direction changes require a concerted swivel of the wheel.

The B-class is most at home being driven at a leisurely pace, where it amply fulfils its remit as a spacious, well-appointed, extremely comfortable mode of transport.

• The writer contributes to Torque, a motoring monthly published by SPH Magazines.