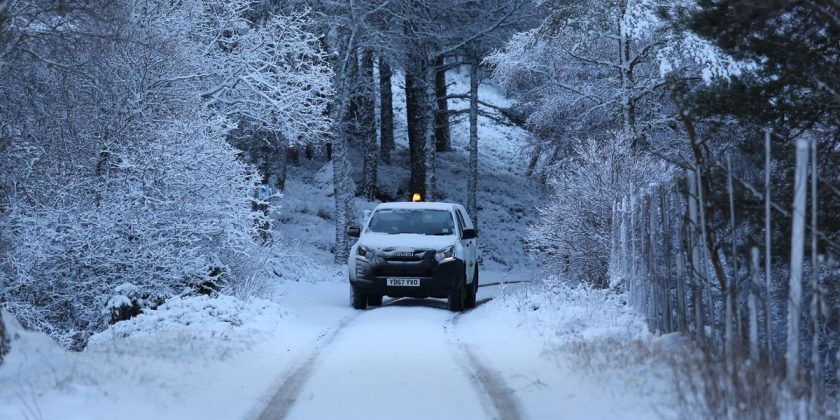 A weather warning for snow has been extended by the Met Office.

The snow flurries will continue until midnight tonight affecting much of northern England, Scotland and the Midlands.

The Met Office have warned: "A band of rain, sleet and snow will move slowly eastwards across England and southern Scotland during Friday.

"There remains uncertainty in the extent of any snow, but there is the potential for 1-4 cm of snow to accumulate on some higher level routes, chiefly above 250 metres."

The snow could make travel difficult, especially in higher areas.

Forecast models suggest temperatures dipping below normal during next week, but feeling much colder in the wind chill, with the growing risk of a wintry snap taking control.

It will be bitterly cold throughout the week with the mercury continuing to fall and widespread frosts common, according to The Weather Channel.

Four centimetres of snow was recorded in Aberdeenshire yesterday morning — but another centimetre on top of that is expected to fall at the top of Snowdonia in north Wales by the end of today.

Heaviest snowfall is possible in Scotland, the Welsh Mountains, the Pennines and higher ground in the north and Midlands.

Unsettled conditions will continue into midweek bringing frequent bursts of showers in many locations. More snow is likely when any rain collides with the predicted rush of cold air from the east.

Spells of icy rain, sleet and snow are expected – especially at higher levels in the north and east.

Cold conditions will grip the UK as the week progresses and winds will also pick up to make it feel quite raw and blustery.

Long-range forecasts for the end of the month indicate a higher risk than usual of snow at lower levels, even in the south. But details are uncertain with short milder and wet spells also possible.

Yesterday, parts of Britain were turned into a winter wonderland as the first significant snowfall of the season hit.

Northern England and Scotland saw as much as 4cm fall.

With the Arctic air sweeping the country, British Gas is predicting more than 81,200 engineer call outs across the UK this week alone.

Hannah Hughes, a service and repair engineer, said: "Having no heating or hot water during the colder months is people’s worst winter disaster in the home."