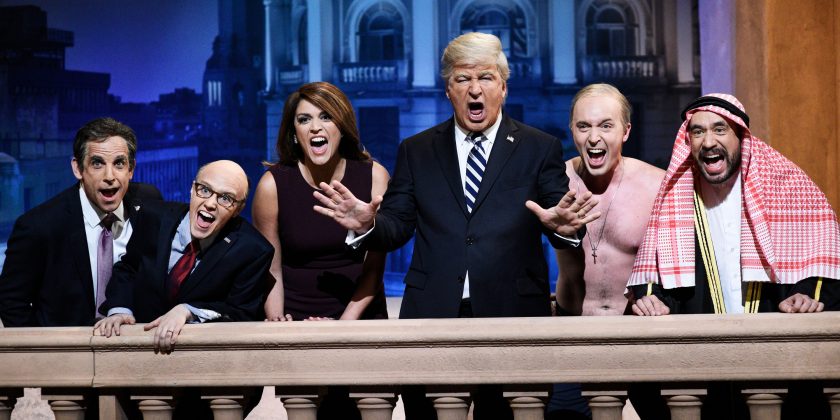 Alec Baldwin returned as President Trump on "SNL" to see what life would be life had he not won the election. (Photo: Will Heath, NBC)

Have you ever wondered: What would things be like if Trump hadn’t won the election?

In the black-and-white bit, Trump complains, “I don’t think I can do this anymore … Sometimes I wish I were never president.” Cue an angel (Kenan Thompson), who let’s Trump go to a Christmas party where he’s no longer commander-in-chief. He sees members of his cabinet, in their alternate, happier paths.

Here’s how everyone faired in this world where Hillary Clinton won the presidency:

White House advisor Kellyanne Conway is noticeably healthy, and says, “After we lost the campaign the devil did give me my soul back … now I talk to my husband (lawyer George Conway who has spoken out against Trump).”

Trump’s former lawyer Michael Cohen (Ben Stiller) is happy to see Trump, saying “You’re my best friend. You taught me everything I know.”

First lady Melania Trump has divorced Trump, lost her accent and is “happily married to Papa John.” Trump has a new wife now called Hernia, a “suitcase girl” from a game show.

Vice president Mike Pence is deejaying the party and not at all upset that Trump lost the election.

But even when presented with with a world where his peers seem better off with Clinton in office, Trump doesn’t come away wishing he didn’t win the election.

“I’ve had an epiphany,” says Trump. “The world does need me to be president after all.”