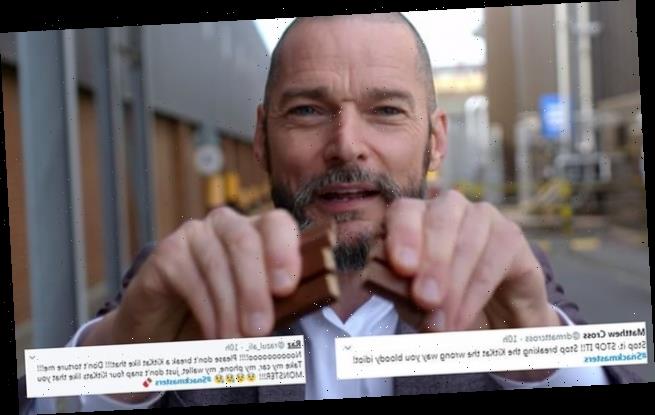 First Dates star Fred Sirieix was branded a ‘monster’ over the way he snaps KitKat biscuits in half, by viewers of Snackmasters last night.

The French Maître d’hôtel presented the new Channel 4 programme, which saw chefs go head to head in an effort to recreate the famous British biscuit snack from scratch.

But viewers were distracted by Fred’s method of snapping the biscuits in half, which saw him breaking the snack width-ways across all four fingers.

Some branded him a ‘monster’ online for the act, with one tweeting: ‘Nooooo! Please don’t break a Kitkat like that! Don’t torture me.’ 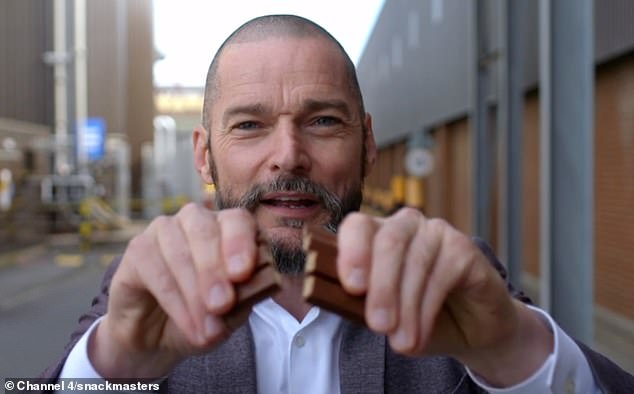 Viewers took to Twitter with their shock, with one jokingly commenting that his technique was like ‘torture’

They added: ‘Take my car, my phone, my wallet, just don’t snap four KitKats like that, you MONSTER!’.

Meanwhile another viewer wrote: ‘Stop it. STOP IT! Stop breaking the KitKat the wrong way!’.

The Channel 4 programme followed two top chefs competing to recreate a replica of the chocolate-covered wafer bar, before being judged by the workers and bosses behind the real thing.

In last night’s episode, Daniel Clifford from Cambridge’s Midsummer House and Vivek Singh from Westminster’s Cinnamon Club went head-to-head in the programme, in an effort to recreate the perfect KitKat. 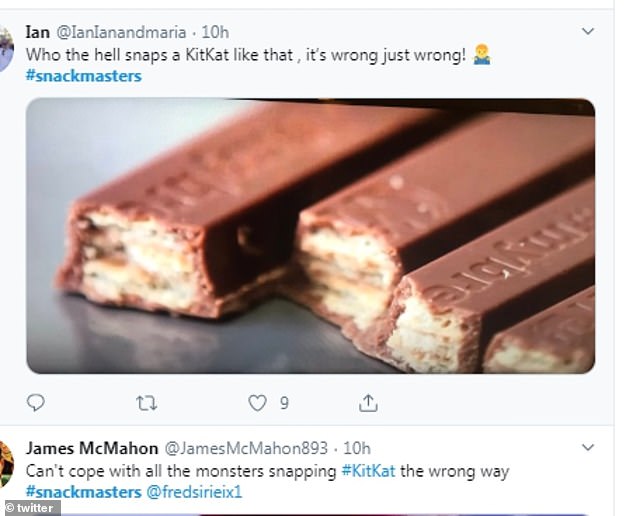 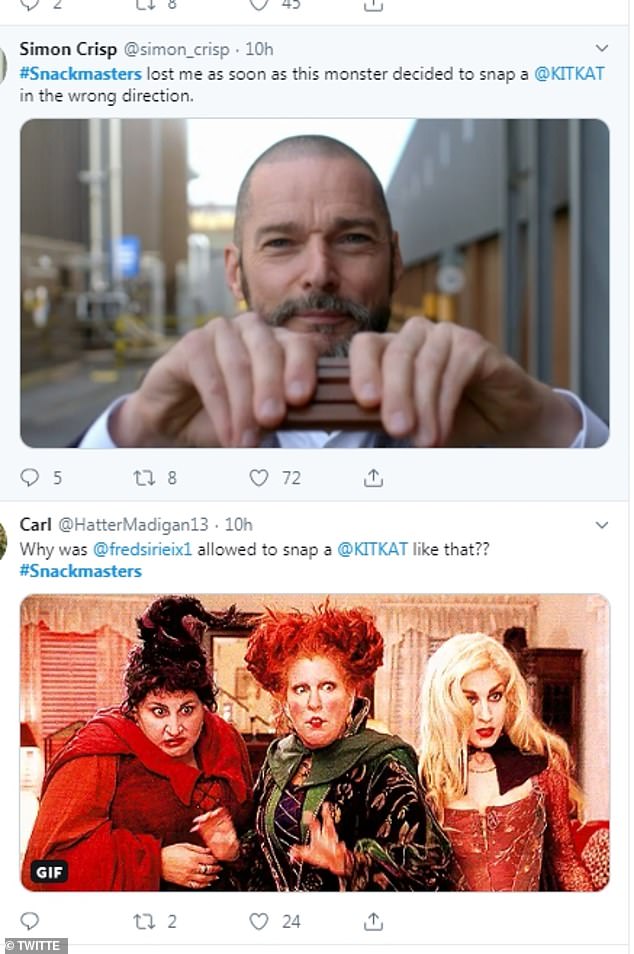 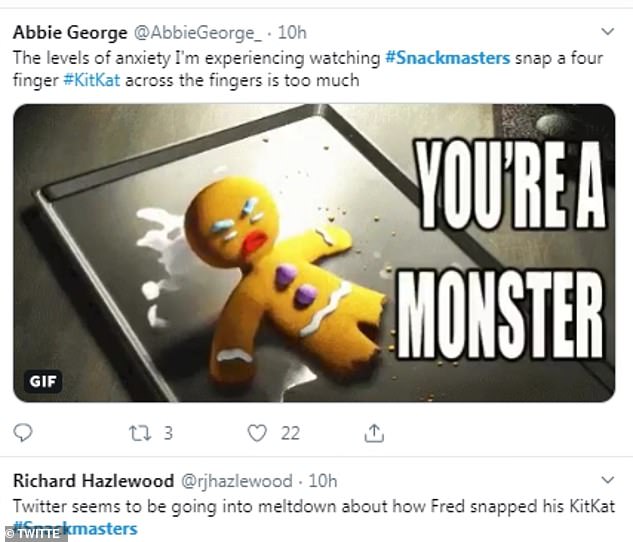 Viewers were horrified by Fred’s technique of snapping his KitKat, which saw him break the four fingers width-ways

But in an effort to study the wafer bar coated in chocolate, presenter Fred, and chefs Daniel and Vivek were forced to snap the bar width-ways across all four bars.

Viewers were aghast by the technique, which goes against the ‘traditional’ method of breaking the bar finger by finger.

Many took to Twitter with their ‘disgust’ over the technique, which they branded ‘wrong’.

One commented: ‘Fred you psychopath, who snaps a KitKat like that?’. 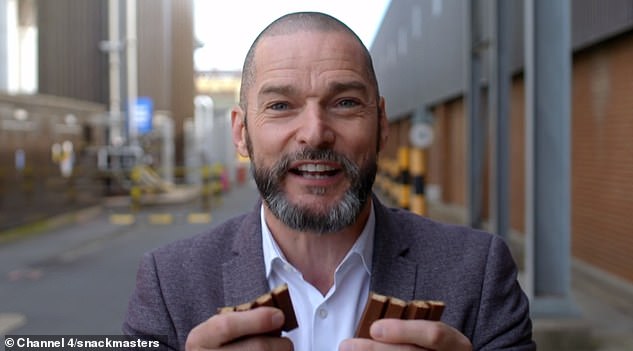 The French Maître d’hôtel presented the new Channel 4 programme last night, but viewers were shocked by his snapping technique 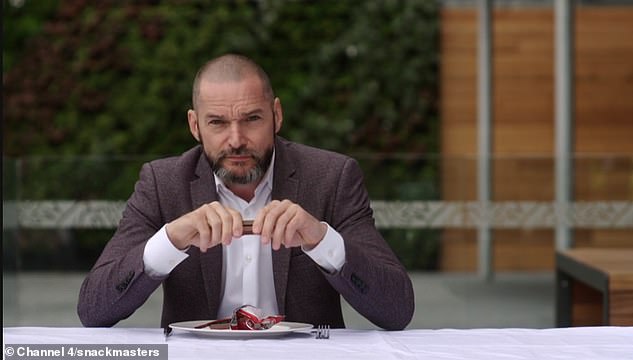 Viewers became distracted by Fred’s continued snapping of the biscuits, with some saying they were ‘disgusted’ by the act

‘I do not trust anyone who snaps all four fingers of a KitKat at the same time, begone Satan,’ one commented.

Another tweeted: ‘Who the hell snaps a KitKat like that, it’s wrong, just wrong!’

Another wrote: ‘The levels of anxiety I’m experiencing watching #Snackmasters snap a four finger KitKat across the fingers is too much.’

One added: ‘Can’t cope with all the monsters snapping KitKat the wrong way.’

Another said they were ‘disgusted’ by Fred’s actions, writing: ‘I can’t believe he just broke that KitKat the wrong way. I’m genuinely disgusted.’

‘Twitter seems to be going into meltdown about how Fred snapped his KitKat,’ another tweeted. 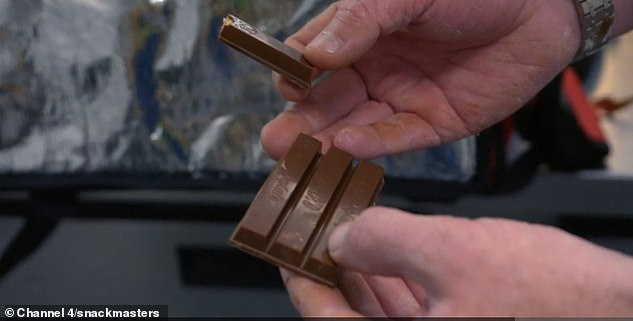 While Fred continued to break his biscuit width-ways, others in the programme did snap the KitKat the ‘right’ way – by breaking the biscuit off finger by finger