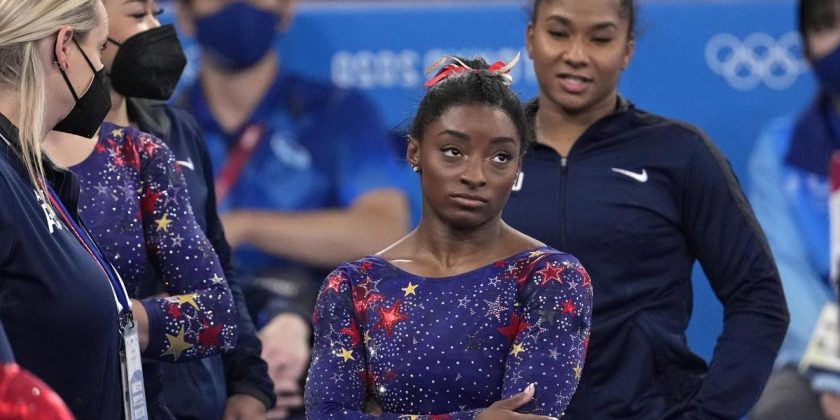 Simone Biles pulled out of the gymnastics team finals in Tokyo this week, a decision she said left her feeling “super frustrated.” Biles said she was physically fine, but decided to withdraw due to mental health reasons. There are still several gymnastics events left, and Biles could return. But if she doesn’t, there are some events that no other U.S. gymnast can compete in. Here’s why.

Who will replace Simone Biles?

Biles pulled out before several Olympic events occurred. The first one she missed was the team finals, in which gymnasts from each team complete in each of four events: vault, balance beam, uneven bars and floor exercise.

Biles was set to compete in three events during the team finals. Jordan Chiles took her place on uneven bars and balance beam and Suni Lee replaced her on floor exercise. The team earned silver.

Next is the individual all-around competition, in which the top two gymnasts from each qualifying team competes in all four women’s gymnastics events: vault, balance beam, uneven bars and floor exercise. The top two gymnasts on Team USA were Biles and Suni Lee.

But now Jade Carey, who didn’t qualify for the team all-around because she ranked third on Team USA in the qualifiers, will take Biles’ place in this event. She and Lee will compete on Thursday.

Biles can also compete in next week’s individual competition, as she qualified for all four individual events. In these events, individual gymnasts qualify and compete against each other – not full teams – so, Biles can’t be replaced. She qualified on her own.

Biles said on Wednesday morning that she would drop out of the all-around, and she’s already been replaced by Carey. However, she hasn’t yet made a decision on her individual events. In a statement, Biles said she’d “continue to be evaluated daily to determine whether or not to participate in next week’s individual event finals.”

She also told reporters that the team will have Wednesday morning off and said it will be a “good mental rest.”

An injured or sick gymnast can be replaced no less than 24 hours before the start of the qualifications. That is when an alternate can be brought in, according to the international federation’s rule book.

However, a gymnast who needs to be replaced after qualification – for final events – can only be replaced with another qualifying gymnast. Therefore, none of the alternates can replace Biles, because they did not participating in the qualifying events. Only her current teammates who qualified can replace her.

The pressure on Biles

Before she decided to withdraw, Biles opened up about her Olympic struggles on Instagram. “It wasn’t an easy day or my best but I got through it. I truly do feel like I have the weight of the world on my shoulders at times,” Biles wrote on Monday. “I know I brush it off and make it seem like pressure doesn’t affect me but damn sometimes it’s hard hahaha! The Olympics is no joke! BUT I’m happy my family was able to be with me virtually. They mean the world to me!”

Often referred to the “greatest of all time,” or G.O.A.T., 24-year-old Biles has set quite a precedent for herself. She already has four Olympic gold medals, and four gymnastics moves named after her. However, the superstar has also been candid about how the sport has taken a toll on her mental health.

“Physically, I feel good, I’m in shape,” Biles told NBC’s “Today” on Tuesday. “Emotionally, that kind of varies on the time and moment. Coming here to the Olympics and being the head star isn’t an easy feat, so we’re just trying to take it one day at a time and we’ll see.”

Biles has overcome many obstacles in recent years, even competing at the 2021 national competition with broken toes. And after USA Gymnastics team doctor Larry Nassar was sentenced to up to 175 years in prison for sexually abusing countless gymnasts – including Biles – she used her platform to help other survivors.

“I just feel like everything that happened, I had to come back to the sport to be a voice, to have change happen,” Biles said in a “Today Show” interview about her return to the Olympics earlier this year. “Because I feel like if there weren’t a remaining survivor in the sport, they would’ve just brushed it to the side.”

Biles said since she’s still competing – and has a large social media presence – USA Gymnastics has to make changes in the sport. “So I feel like coming back, gymnastics just wasn’t the only purpose I was supposed to do,” she said.