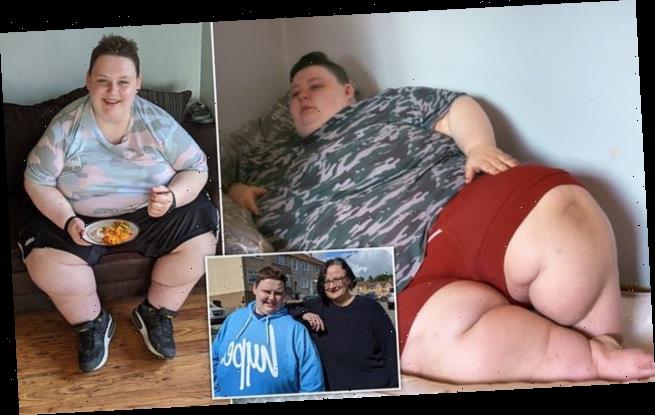 AJ, 24, from Airdrie, Scotland, who identifies as non-binary, appears on the Channel 4 show tonight alongside their mother Sharon, 44, who cooks for them, helps them shower, and even sleeps in the same room.

While AJ goes on to have weight loss surgery and takes their strict diet in their stride,  Sharon struggles as she confesses she feels like she is ‘starving her child to death’.

Psychologists encourage the pair to ‘separate’ and work on their independence from one another, with Dr Laura Williams telling the camera: ‘AJ and Sharon are so intrinsically linked that AJs development has been arrested and delayed. Things have become to shift but change isn’t something that happens overnight.’ 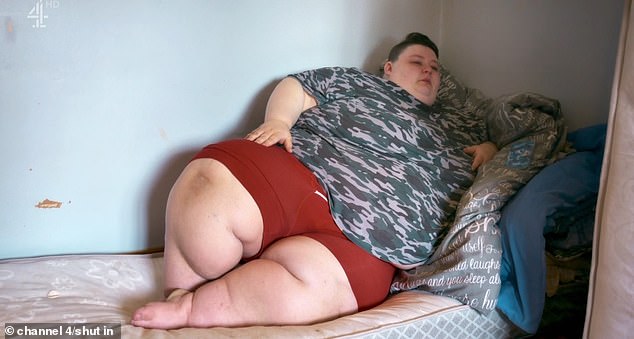 AJ, 24, from Airdrie, Scotland, appears on Channel 4’s Shut In: Britain’s Fattest People tonight as they undergo bariatric surgery after their weight ballooned to 41st

The documentary follows AJ and Sharon as they try to prove to bariatric surgeon Professor Kerrigan that AJ’s life is dramatically changing so he will be offered the weight loss operation.

Having three meals a day and exercising regularly are among the rules that AJ is trying to stick to.

They start exercising on a treadmill several times a week, telling the camera: ‘I go on it three days for 20 minutes and then I have one day rest so the muscles can repair and relax.’

Dr Laura begins a session with AJ by bringing up the idea that they could live on their own one day but AJ responds with a flat ‘no.’ 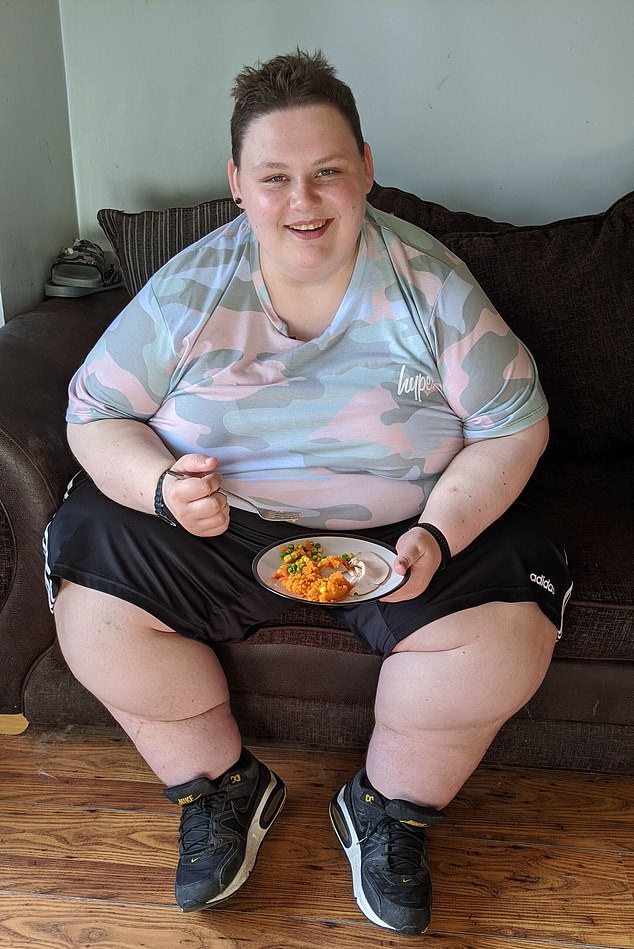 After having bariatric surgery to remove three quarters of their stomach, AJ swiftly loses 12st and drops to 29st (pictured, after weight loss)

Dr Laura says: ‘My sense is you’re very definite about that because it brings up some difficult things for you.’

AJ wipes their tears, saying: ‘I don’t want to leave my mum.’

She asks: ‘That idea of leaving your mum is really emotionally charged. Do you worry about your ability to cope without your mum?

‘I wonder if that idea of separating from Mum is so overwhelming, you can’t think about it at the moment.

WHAT IS BARIATRIC SURGERY?

Bariatric surgery is a variety of procedures designed to help a patient lose weight.

It also includes gastric bypass surgery, in which surgeons reroute the intestine to a small stomach pouch which shrinks the stomach.

‘But perhaps building up your skill level around coping and eventually working towards potentially independent living.’

After five weeks on the weight loss programme, Sharon and AJ travel to Chester to meet with Professor Kerrigan again.

Sharon says: ‘If it goes ahead, it’s  going to be brilliant. my child is going to be reborn.

‘She is going to have this new tool to help her. If he decides he can’t do it, my daughter is going to die.’

AJ reveals they have lost two stone in just five weeks, with Professor Kerrigan saying: ‘What you’ve shown us you can do is that surgery is a worthwhile option for you.’

Weeks later, Dr Laura arrives to visit AJ and Sharon at home, to see the pair in their own environment.

The psychologist questions Sharon’s choice to sleep in the same room as AJ, as well as her decision not to diet along with her child.

She encourages them to consider where they were sleeping, adding: ‘Both AJ and Mum are sleeping downstairs. That’s a representation of that codependency and that reluctance to separate even for the hours that you might sleep.’

To prepare for the surgery, AJ is placed on a super strict diet of just 800 calories a day and they begin to notice changes after just a few weeks.

Speaking about what they’d like to see in the future, they add: ‘Getting a relationship is something I would consider maybe. You’d have that companion then wouldn’t you. So we’ll see.’

By February 2020, AJ has lost a further 2 stone, with Sharon confessing she is growing more apprehensive about their surgery. 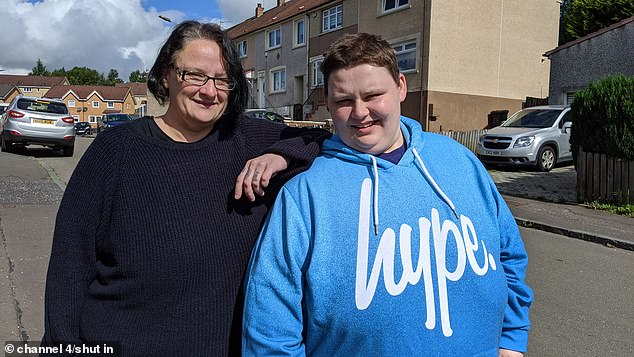 While AJ takes the post-surgery diet in their stride, their mother Sharon confesses she is struggling and says she feels she is ‘starving her child to death’

She says: ‘Little bit nervous now  it’s getting so close. I’m full of regret that its had to come to this. I do blame myself. If I had a time machine and I could go back, I would.’

As the date of the operation approaches, AJ tries to be positive, but the enormity of what lies ahead may be dawning.

Settling into the hospital bed, they say: ‘Tomorrow is the beginning and the start  of the new me.’ 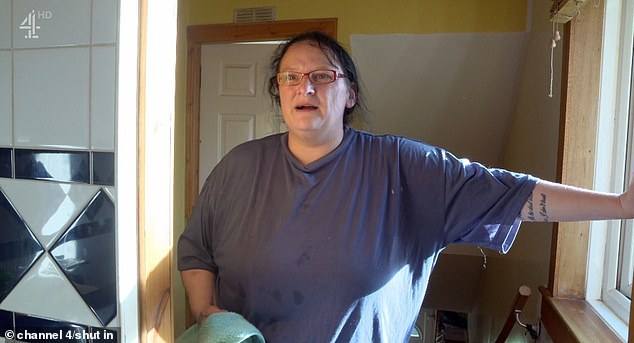 With a starting weight of 41 stone, AJ is one of the biggest patients Professor Kerrigan has operated on but the surgery goes ‘very well’.

He removes three quarters of their stomach, leaving them with a small stomach pouch.

What is gender dysphoria?

Treatment for gender dysphoria aims to help people live the way they want to, in their preferred gender identity or as non-binary.

Gender Dysphoria Clinics have a multidisciplinary team of healthcare professionals, who offer ongoing assessments, treatments, support and advice, including: psychological support, such as counselling cross-sex hormone therapy speech and language therapy (voice therapy) to help you sound more typical of your gender identity

The aim of hormone therapy is to make you more comfortable with yourself, both in terms of physical appearance and how you feel. The hormones usually need to be taken for the rest of your life, even if you have gender surgery.

Some people may decide to have surgery to permanently alter body parts associated with their biological sex.

Based on the recommendations of doctors at the gender dysphoria clinic, you will be referred to a surgeon outside the clinic who is an expert in this type of surgery.

In addition to you having socially transitioned to your preferred gender identity for at least a year before a referral is made for gender surgery, it is also advisable to:

It’s also important that any long-term conditions, such as diabetes or high blood pressure are well controlled.

Professor Kerrigan explains: ‘What I hope for AJ is not just x amount of weight loss, but also going out there and doing things that 20 to 30 somethings do.

‘It would be really good if AJ and Sharon see this as a golden opportunity for a new life and its really important they don’t mess it up.’

After two weeks, AJ can just eat five small portions of soft food a day and, while AJ is committed to the new eating plan, Sharon isn’t convinced.

‘I must admit yesterday when AJ was tucking into her beans… you know that lovely instinct you get when you want to take the bowl of beans off her and feed her up.

‘I felt…I felt like i was starving my child to death.’

The success of AJ’s weight loss relies on Sharon and AJ pulling in the same direction so Dr Laura wants to see Sharon on her own.

Dr Laura asks: ‘What I thought would be helpful is having a chat about how things are going post-surgery.’

Sharon says: ‘I did have a bit of a wobble moment where I just wanted to feed my baby.

‘Thinking about going back to the past, when people would say, did you comfort eat and that kind of thing….I thought hang on a minute, I might have done.’

Dr Laura presses Sharon to admit the comfort eating was maybe more comforting ‘for her’ rather than AJ, adding: ‘For you there is something that tells you you’re a good mum because you feed your child.

‘I wonder if you have some sense of  how your relationship with AJ has changed?’

Sharon explains: ‘My relationship with AJ is never going to change, it’s always going to be a strong bond…but obviously she will have to go out and do stuff on her own. I’ll have to cut the apron strings.’

She goes on to confess it is probably ‘most difficult’ for her, with the psychologist explaining: ‘What I’m hoping is Sharon can get to a stage with AJ to move forward with their life and start forging ahead, and help AJ feel confident that shes always there to support her so that they don’t remain so attached.’

Despite the Covid-19 lockdown, weight continues to shift off AJ in the following months, with their  BMI has dropping from 95 to 67 while their weight also drops from 41 st down to 29 stone.

AJ says: ‘You see when you get these people who stand in front of a mirror  and they say, “Oh my god, I’ve never looked so fat”.

‘But when I look in the mirror, I just look and think “Oh my god, I’ve never looked so thin.’

Six months after bariatric surgery, life is no longer such a struggle for AJ, who can take care of themselves and helps out around the home.

They also sleep in their own room, with AJ saying: ‘I get good quality sleep, longer sleep. I’ve got that privacy and independence. I am happy I’m on my own.’ 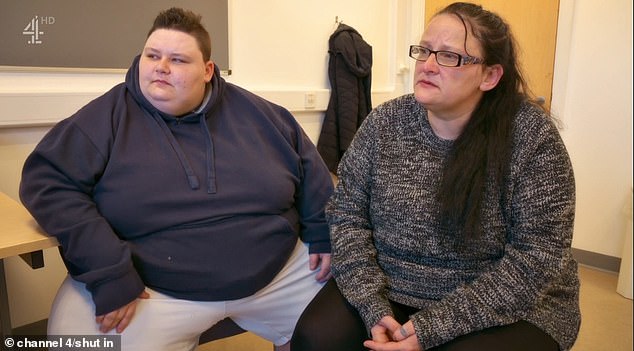 AJ is able to have the weight loss surgery after changing their lifestyle, eating three meals a day and exercising regularly

As lockdown eases, AJ goes to meet up with Dr Laura in person, explaining: ‘I can do things better, I’m just finding general life easier. It’s like I’ve started anew..like a pheonix. That’s me. Reborn.’

Dr Laura says: ‘I think i saw a very different AJ. They were much more articulate and transparent.

‘From a psychological point of view, there’s definitely still areas AJ would benefit from working on in the future, but I’m just really pleased for AJ.’

Even though AJ is dong well, a second bariatric procedure may be needed next year, which could take AJ closer to having gender surgery one day. 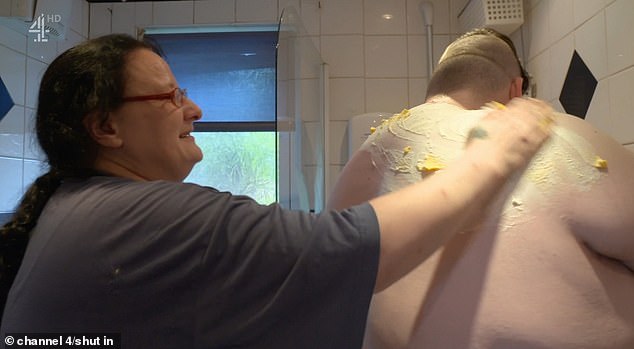 Because of AJ’s huge size, Sharon was forced to help them shower and slept in the same room as them for several years

They explain: ‘I’d like to have a double hysterectomy and a mastectomy and hormones. if I could put myself in a machine, I want that that that and that..and tada.’

AJ meets up with Dr Sandy Melvin, a gender consultant, for a virtual appointment, who explains: ‘It would be understandable if you felt different as your body changed.

‘I spoke to Professor Kerrigan and we’ll weigh up your progress after your second surgery.’

AJ confesses they feel positive about the meeting, adding: ‘I think that went pretty well because she has given me something positive to look forward to.’ 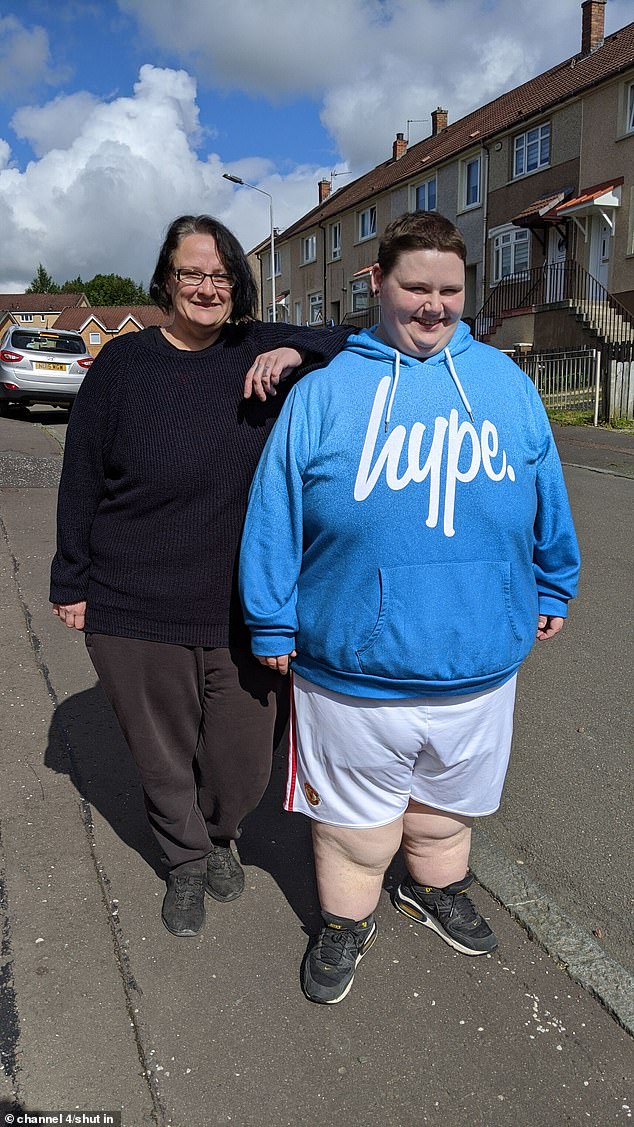 At the end of the documentary, AJ says they are feeling positive about the future and having gender reconstructive surgery

As well as aiming toward gender surgery, they are also getting work experience at a local dog salon and taking driving lessons.

Sharon explains: ‘She’ll always be my baby, no matter what size she is.’

Meanwhile AJ adds: ‘I’m proud of what I’ve achieved so far. I don’t feel so shut in anymore.’