A woman has divided opinion after asking whether she should leave her husband after 17 years of marriage due to their lack of ‘sexual spark’.

The anonymous poster, thought to be UK-based, took to parenting forum Mumsnet to ask others for their opinions on the relationship.

In her post, she revealed that her partner is a very attractive man, but that the pair have never been compatible in the bedroom.

And she added that in the intervening years, and through becoming parents, they’ve become increasingly distant, further highlighting their lack of spark. 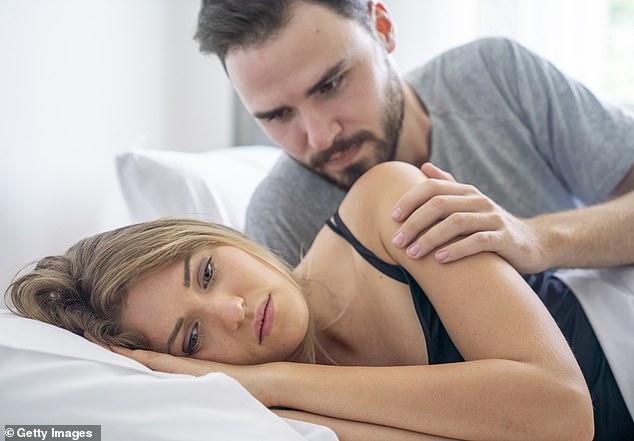 A woman has asked for advice on whether she should stay in her 17-year marriage, admitting there has never been a ‘sexual spark’ (stock image)

She wrote: ‘Both in our early 40s, been married for 17 years. Dear husband is very attractive but even when we first got together there just wasn’t the compatibility in the bedroom.

‘To me, he always just came across as quite wooden and we never clicked. However, we used to really connect in other ways so I sort of overlooked it.

‘I had lived with other partners before dear husband so in a way I know its us rather than men and me in general.

‘Fast forward to now and we have each changed and have less in common etc and things are definitely fraying badly at the seams. 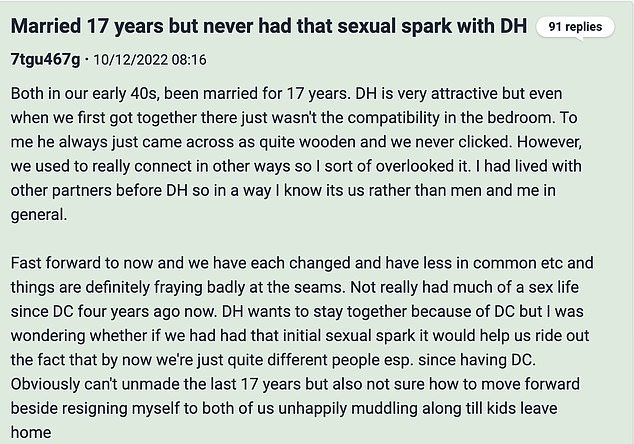 The anonymous poster revealed that she didn’t know what to do about her relationship, and asked others for their thoughts

‘Not really had much of a sex life since dear child four years ago now.

‘Dear husband wants to stay together because of dear child but I was wondering whether if we had had that initial sexual spark it would help us ride out the fact that by now we’re just quite different people esp. since having dear child.

‘Obviously can’t unmake the last 17 years but also not sure how to move forward beside resigning myself to both of us unhappily muddling along till kids leave home.’

Her post sparked mixed reactions from the people who responded, many of whom felt she should leave the relationship.

However, many others pointed out that leaving after so many years is difficult, and that she would be ‘mad’ for throwing away a long term relationship with a many who seems to have many positive qualities.

One wrote: ‘Sounds like he has some really great qualities OP which is why it’s a hard decision to make. He is the father of your children, good with them, nice looking etc.

‘It’s easy to see why you didn’t prioritise finding a partner who you were sexually compatible with. Given the dating pool, I’d say you did well!

‘Do you want things to work out? What would your ideal sex life look like?’

And another added: ‘So you’re married to a good man, a good dad, handsome, but you don’t have much in common at the moment, and he’s not very good in bed.

For a number of forum users, the poster’s lack of a ‘spark’ does not seem enough to end the long-term relationship, as the poster said he has other positive qualities

‘I’m not sure how you feel. Are you starting to resent him because you aren’t drawn to him in the physical/ emotional sense so you don’t know how to bridge the gap between you? Or are you more worried or depressed?

‘Are you physically affectionate together, would cuddling more foster the closeness you lack.

‘Once distance becomes the norm you need an ice breaker. Or are you very turned off and don’t want touch?

‘I don’t think the spark is crucial to feeling loved and cared for.’

Meanwhile a third wrote: ‘I think you were mad to marry somebody you weren’t sexually attracted to. However, you say he is attractive and fit, a good parent and he wants to stay with you.

‘It sounds like perhaps you could benefit from trying to relate to each other more before throwing it away. The grass isn’t greener in most cases.’

However, for other respondents, the idea of staying in a relationship with no real spark was not tenable, and many suggested the poster leave the marriage. One wrote: ‘You’ve settled for someone you didn’t fancy. It must be really tough after 17 years and kids but I would break up.’

A second agreed, adding: ‘Marrying someone when you don’t have the spark would feel just like marrying a good friend?

‘That’s enough for many people but would never have been enough for me. I already had plenty of friends so didn’t see the point in marrying to just acquire another one. I wanted something more passionate and more intimate than just friendship.’

And a third agreed that ending the marriage could be the right option, suggesting: ‘Maybe you should try some relationship counselling to work out what you both want? Or just have an honest conversation yourselves.

‘If you have both stopped trying in the relationship I think you need to decide what to do- split up, stay together as friends for the kids, or start trying to make it work. Might be better than staying in unspoken limbo? I would say a “spark” is the least of your worries at this point.’

Meanwhile, a mother divides opinion by admitting she finds friendships more stress than they’re worth