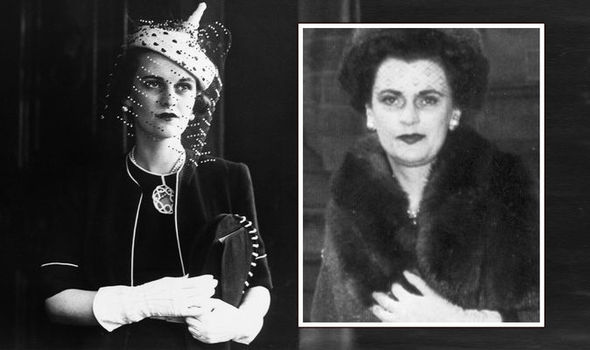 There’s even a helpline for victims. But there were no helplines in 1963 when Margaret, Duchess of Argyll, was in the Edinburgh court in the sensational divorce case brought by her husband Ian Campbell, the Duke of Argyll – one of the longest and costliest in British legal history. Although I’m sure Margaret would have regarded helplines as unspeakably common.

Ian, a moody and occasionally violent alcoholic, addicted to gambling and prescription drugs, had stolen his wife’s diaries and a set of new-fangled Polaroid photographs taken in her Art Deco styled mirrored bathroom at 48 Upper Grosvenor Street (designed by Syrie Maugham, wife of Somerset).

But it wasn’t the bevelling of the glass which caught the eye. It was Her Grace, viewed from the back – but identifiable by the diamond clasp on her three-string Asprey pearls which was all she was wearing – performing a sex act on a gentleman caller whose head was not visible. This was “the headless man”, whose identity is still a matter of dispute.

The Duke was obliged to undergo a medical examination to prove that he was not the object of the Duchess’s diligent ministrations which meant, as she later put it, that “he had to live with the humiliation of declaring his lesser dimensions”.

After many days of this nonsense, the judge Lord Wheatley gave his verdict, describing Margaret (the Duke had accused her of having 88 lovers) as “a highly-sexed woman who had ceased to be satisfied with normal relations and had started to indulge in disgusting sexual activities to gratify a debased sexual appetite”.

On and on he went for hours, nearly 50,000 words of lip licking character assassination. Others would chip in: Lord Hailsham even thundered that she was “an affront to a Christian country”.

Frequently described as a society beauty and named Debutante of the Year in 1930, Margaret was really no beauty.

But her deep-set green eyes, set off by the carmine lipstick, pale powdered face, and dark hair, made her extremely striking.

There’s a haunted but predatory look in her eyes, vulnerable yet dangerous. Love me, those eyes plead, even though I may have to kill you afterwards. She was very sexy. But apart from that, why should we care about this snobbish old trout who died, impoverished, in a London care home in 1993 at the age of 80?

My excuse is that I’m endlessly fascinated by that generation who came of age in the 1930s, when the upper classes clung to the vestiges of the Victorian age before being tipped unceremoniously into the Second World War, only to surface in what is just about recognisable as the modern era when deference was not so much dead as curdling.

Ethel Margaret was born outside Glasgow in 1912 to Helen and George Whigham, a self-made millionaire.

The family soon moved to New York. Ethel, who demanded she be called Margaret, was considered a plain little girl. When Helen feared that her only child lacked a sense of humour, a psychiatrist prescribed Charlie Chaplin movies.

The Whighams moved back to London when Margaret was 13.

As can happen to left-handed children forced to write right-handed, Margaret developed a stammer and was treated by Lionel Logue who would later help George VI, the story immortalised in the film The King’s Speech.

WHEN she was 14, Margaret was informed by her mother that sex was “this awful thing we women have to put up with”.

But rather than be put off, Margaret decided to test this theory for herself – so at the age of 15 while on holiday on the Isle of Wight she slept with a 17-year-old David Niven. She found she was pregnant and was hustled off for an expensive and illegal abortion.

Touchingly she and Niven remained close friends for the rest of their lives.

She was sent to a finishing school in Paris which she hated. There was certainly no question of Margaret finishing – she was just getting started. She hoped to marry Prince Aly Khan, playboy son of the Aga Khan, but the Whighams didn’t want her to marry a Muslim.

She then had an affair with the dashing (and married) World War One aviator and Le Mans winner Glen Kidston who had been in a relationship with Barbara Cartland, the actress Pola Negri and was currently living with socialite Doris Delevingne.

In 1931 he made a record-breaking flight from Wiltshire to Cape Town in six and a half days but was killed not long afterwards flying over the Drakensberg mountains.

Margaret fainted at a society event when she saw a newspaper headline announcing his death. Love letters from Kidston continued to arrive for days after the tragedy which must have been brutal. But by the age of 19 she had cheered up enough to be engaged simultaneously to American millionaire golfer Charles Sweeny, Max Aitken (son of the Daily Express proprietor Lord Beaverbrook) and the Earl ofWarwick.

Delicately extricating herself from this awkward situation she married Sweeny in 1933 at the Brompton Oratory in London’s Knightsbridge.

There’s a wonderful snippet of Pathe newsreel on YouTube showing Margaret and Charles emerging from the church into a mob of thousands of well-wishers. Margaret, lantern-jawed but smiling, seems magnificently indifferent to the crowd.

A couple of ushers scamper behind her holding up the endless train of her beautiful Norman Hartnell wedding dress as though it is a bundle of laundry before bunging it after her into the waiting Rolls.

Then we cut to a shot of the nine strapping bridesmaids, all simpering prettily.

But if we are looking for reasons to empathise with Margaret then there was the traumatic stillbirth of her first baby and at least eight miscarriages that followed. Two children survived, Frances and Brian.

She had the usual near-misses experienced by many who remained in London during the Blitz.

Then in 1943 while visiting her chiropodist on Bond Street she fell 40ft down a lift shaft and spent three months in hospital, eventually defying doctors who feared she would never walk again.

She lost her sense of taste and smell and Sweeny preposterously claimed that her brain injury caused nymphomania which destroyed their marriage. She said it was because of his infidelities.

In 1951 she married the Duke, borrowing £100,000 from her father in her attempt to restore the family seat of Inveraray Castle and clear her new husband’s debts.

It was a disastrous relationship from the beginning. The Duke, now on to his third marriage, was a nasty piece of work and soon became intent on finding evidence of his wife’s infidelities so that he could get a divorce. It was all unbelievably messy and culminated in the extraordinary trial.

She had her fans though, even then. Women in the public gallery at the Edinburgh court wrote to “express their admiration to your courage in standing in the witness box and speaking so barely in your own defence… you touched our hearts”.

In our age, Margaret would be very much the heroine, the victim of societal misogyny and of a controlling and abusive husband who exploited her financially and emotionally. Her cold mother, her early abortion, her many miscarriages, the family’s ban on her relationship with Aly Khan, the death of her lover Glen Kidston… all would be used to show how wronged she had been, how damaged at such a young age. Her promiscuity would be viewed as a cry for the love which had long been denied her.

Something along those lines anyway. But what I adore about Margaret is her life-long nonchalance, the gutsiness, her couldn’t-give-a-stuff swagger.

She never wanted anyone’s pity. It would have struck her as vulgar. However, within months of her divorce case it was the Profumo case that was getting all the headlines, with its salacious details of Christine Keeler’s affair with both the Cabinet minister John Profumo and the Russian attaché Yevgeny Ivanov.

“It gave people something else to think about,” observed Margaret dryly.

She never revealed the identity of “the headless man” and some said it was because she couldn’t remember.

Though she did once say “the only Polaroid camera in the country” was kept at the Ministry of Defence. One of the possible candidates was Defence Minister Duncan

After the trial Lord Denning – amid concerns that Margaret’s shenanigans had led to a security breach – invited the key suspects to the Treasury.

As they arrived each was asked to sign the register and a handwriting expert compared their signatures with captions written on the four existing Polaroids. Fairbanks seemed to fit the bill though of course it doesn’t prove that he was “the headless man”, only that he was also a guest.

Unlike some of today’s Duchesses, Margaret had no wish to present herself as an ordinary “mom” or lecture anyone on how they should travel.

During the 1970s as she began to run out of money she once went second class on the train. “I don’t think I’ll do that again,” she remarked, “there were children in the carriage.”

HER ROLE as an amiable dinosaur, saying shocking things in an egalitarian age, made her briefly popular as an interviewee in the 1970s. “I don’t think anybody has real style or class any more,” she told the New York Times.”Everyone’s got old and fat.”

She moaned about the “old hat atmosphere” of Monte Carlo, Deauville and Palm Beach and the lack of any decent nightclubs in London. “Ascot is pathetic,” she added, “I don’t know why they keep it going.”

Eventually she had to sell the notorious house in Mayfair but before that she tried to make a few quid by opening it to the public.

For £7.50 the Duchess would appear in a long couture gown, white fox fur stole and (naturally!) pearls to tell her story and give the punters a glass of champagne.

But whereas thousands had mobbed her wedding in 1933, there were very few takers in the 1970s.

Margaret moved into successively smaller apartments in the Grosvenor House hotel, falling out with the staff who infuriated her by calling her Mrs Argyll.

She sacked her longstanding servant Edith Springett who called her a “Mayfair whore” in front of guests.

Margaret’s memoirs were not well received but My Dinner Party Book, published in 1985, is hilarious.

Invite as many interesting single people as possible to your parties, urges the Duchess, but don’t let them bring someone else. “He or she may be a terrible bore.”

The Duchess entertained – in all kinds of exciting ways – some of the most fascinating, energetic and non-boring people of the 20th century. She wasn’t clever or good (though she loved her dogs and did work for animal charities) but she was a spectacular creature of her age. And I think she’d have found all of us terrible bores.