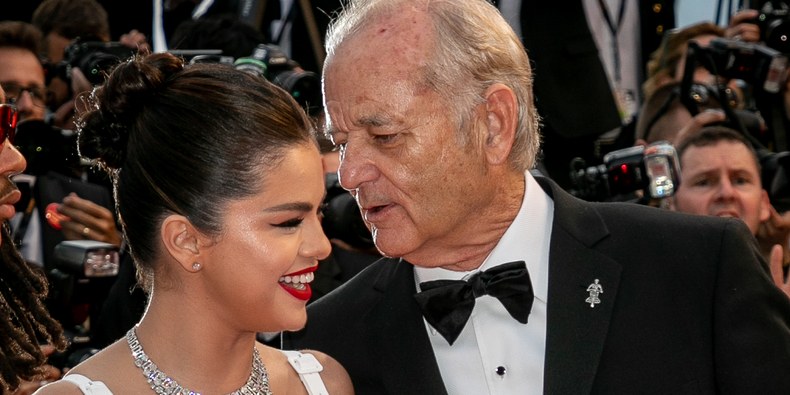 Spoilers for The Dead Don’t Die ahead.

The buzziest entries to this year’s Cannes Film Festival—Quentin Tarantino’s Once Upon a Time…in Hollywood and Jim Jarmusch’s The Dead Don’t Die—share one major similarity: a strikingly star-studded ensemble cast. But there’s a key difference between the movies; by the end of Jarmusch’s film, every single one of those stars—even Selena Gomez—has died a gruesome death.

If you couldn’t already surmise as much from the fact that The Dead Don’t Die is about a zombie apocalypse, Adam Driver’s character, Officer Ronnie Peterson, makes it obvious right at the start. “This isn’t going to end well,” he repeatedly tells the town’s two other cops, played by Bill Murray and Chloë Sevigny, as they patrol the once-peaceful streets of Centerville, which are somehow still sunlit even though it’s night.

The radio—and its reports from “so-called scientists” that polar fracking has sent the earth off its axis—keeps cutting out, and before long the streets are flooded with hordes of zombies, starting with a grimy (and, as usual, shirtless) Iggy Pop. By that point, Driver has a new catchphrase—one that Jarmusch dutifully recited at the film’s New York premiere on Monday night: “The only way to kill the dead is to kill the head.”

Bill Murray, Selena Gomez, and Jim Jarmusch at the New York premiere of The Dead Don’t Die, at the Museum of Modern Art, June 10, 2019.

For the most part, Tilda Swinton, who plays a delightfully oddball mortician, takes care of the decapitation, using a samurai sword. Unfortunately for Driver’s character, though, she isn’t always around, meaning Officer Ronnie Peterson is forced to take down his neighbors—and some new friends too. Like the rest of the town, he’s smitten with Gomez’s character, one of three “hipsters from the big city” who drive into town in a ’68 Pontiac at what turns out to be the worst possible time. But the next time he catches a glimpse of her, it’s too late: Her body’s already been mauled, meaning he only has so much time to swing his machete down on her neck before she, too, goes full zombie. “He felt it was his duty to decapitate,” Jarmusch said, matter-of-factly. “It was preventive.”

Chloë Sevigny and Selena Gomez at the New York premiere of The Dead Don’t Die, at the Museum of Modern Art, June 10, 2019.

By the time Gomez joined him on the red carpet, glowing in a Celine minidress, she looked very much alive. So did Murray, who couldn’t have reacted more differently than Jarmusch when it came to discussing Gomez’s onscreen fate. Dressed comfortably, with a Cubs hat and mug of red wine as accessories, he’d been cheerily discussing his new friendship with Gomez. At the mention of filming Gomez’s final scene, however, he immediately turned somber.

Technically, Murray couldn’t even see Driver deliver the fatal blow from where he was standing on set, but catching the shadow as Driver swung his machete shook him nonetheless. “Just as a visual, it’s disturbing,” he said. “It’s very disturbing, especially after knowing her. You can’t help but think, What if that really were happening?”

Gomez’s death may have been particularly painful, but “the horror of that kind of violence” clearly pained Murray when it came to other characters too. “If you really commit to the idea that you have to kill your friends, you have to cut yourself off from them, that’s something that vibrates inside of you, that stays in you,” he continued, apparently very seriously. “You just don’t easily exhale that.”

Still, Murray found ways to enjoy himself on set. (On one occasion, he turned on the sirens and went for a drive with Driver and Sevigny in their police car.) The same was true for Gomez, according to her costar Austin Butler, whom she knows from her Disney days. Onscreen, his character and the other “hipster from the big city,” played by Luka Sabbat, liked to hang out with Gomez’s character in her ’68 Pontiac, but from the sound of it, the three actors spent their downtime exploring every corner of Woodstock. “We were all already friends, and we were away from the city, kind of isolated up there, so we’d just see what kind of trouble we’d get into,” Butler said. (He opted to list their favorite wholesome activities, such as going on hikes, hanging out by the river, and playing “a lot” of Uno, rather than go into specifics.)

Like Gomez, Butler managed to squeeze in some time with Murray, too. While they hadn’t met before The Dead Don’t Die, Murray warmed up to Butler so quickly that one day Butler returned to his trailer to discover a bundle of fireworks with a card reading “from Bill” attached. He’s still a bit mystified as to why Murray chose that gift in particular, but he remembers it fondly all the same.