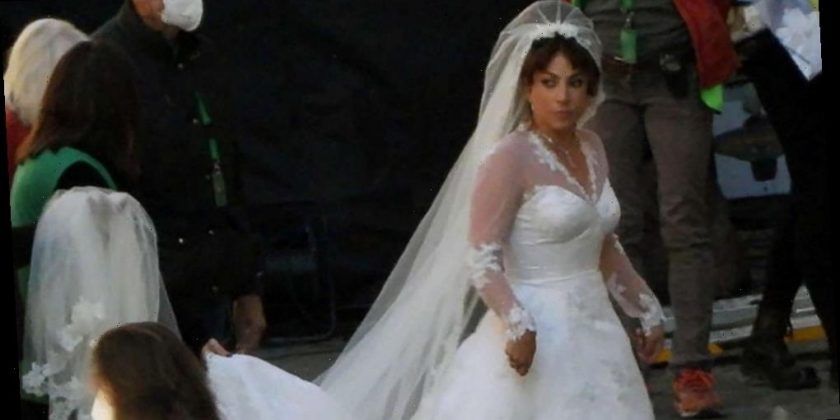 If you’ve ever wondered what Lady Gaga would look like at the wedding altar, now we know.

The singer was snapped in Rome, Italy on the set of her new movie “House of Gucci,” in full bridal attire.

The “Stupid Love” singer appeared to be on her way to film a scene depicting Reggiani and Gucci’s 1973 wedding.

Adam Driver stars opposite Gaga as Gucci in the Ridley Scott-directed film.

In March, Gaga and Driver also were photographed behind the scene wearing standout wintry looks.

As Patrizia Reggiani, Gaga is wearing a black sweater and slacks, lots of gold jewelry and a fur hat over short brunette hair, while Driver, as Maurizio Gucci, sports a cream-toned cable-knit sweater, ski pants and black-framed eyeglasses. The two stand together on the balcony of what looks like a ski lodge in the Italian alps.

“House of Gucci” details how Reggiani was tried and convicted of arranging the 1995 murder of her ex-husband, Gucci, the former head of the Gucci fashion house. They were married in the 1980s, but they divorced in 1991 after he reportedly left her for another woman. Reggiani was released from jail in 2016. The film is set to premiere in November.

“A Star is Born” was Gaga’s last big on-screen moment. She received an Oscar nomination for best actress and won an Academy Award for best original song.