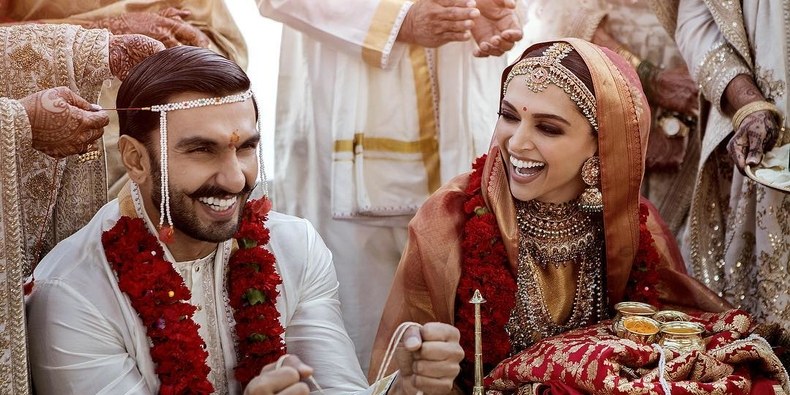 Just when you thought this year couldn't possibly contain any more high-profile weddings, Bollywood's biggest stars Deepika Padukone and Ranveer Singh tied the knot. The wedding, which was pitted against Priyanka Chopra and Nick Jonas' upcoming nuptials when it was assumed the two couples would be tying the knot on the same day, took place this week. Padukone shared the first look at the wedding on her Instagram and, naturally, the photos are gorgeous.

You can see the couple's two looks in the photos, which were designed by Sabyasachi Mukherjee. The pair had two different ceremonies per tradition: a party that embraced the groom's family known as Konkani Phool Muddi and one for the bride's called Anand Karaj. The action went down at Lake Como's 18th century Villa del Balbianello.

There was only love between DeepVeer. Priyanka Chopra shared the love, commenting on the photos "Insanely beautiful" and "Stunning!" As for Chopra and Jonas' wedding, the date is still not public knowledge, but the pair have reportedly already picked up their wedding license. They've also celebrated their upcoming ceremony with a bridal shower and Chopra's bachelorette party, which took place in Amsterdam and featured appearances by Lupita Nyong’o and Kelly Ripa.

While Chopra and Jonas' relationship is a modern one, DeepVeer have a much more traditional background. The couple, who has been dating off and on for the past six years, have been much less vocal about their dynamic and its origins. They haven't officially lived together, either, as Padukone revealed in an interview with Times of India earlier this year. "I've not been in a live-in relationship," she said. "But I've been exposed to various kinds of equations that can exist between people. When I came from Bangalore, it was black and white. Over the years, I've realized that there's more to what we see on a day-to-day basis. There are all kinds of relationships, all kinds of equations. I may not personally endorse them but I've begun to accept and understand that it's all okay. I'm nobody to judge the equations, however strange they may be. But at the same time, I go back to my home and live in the traditional way in which I've been brought up. I'll only move in with my husband." Now that it's official, the couple will finally be roommates.