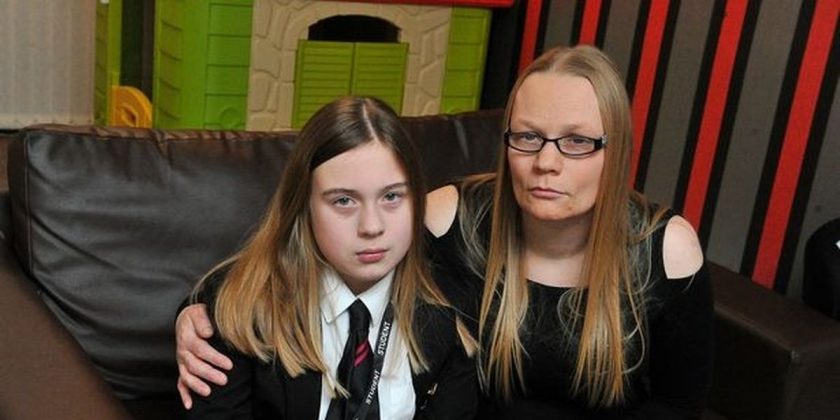 A school girl was left terrified after she was attacked by a man at a bus stop on her way home.

Olivia Manston, 12, was waiting alone for a bus in Bransholme, when a man suddenly approached her and started intimidating the schoolgirl.

He then ripped up her bus pass, stole her necklace and tried to rip her bag from her arms.

A helpless Olivia, who had a cast on her arm after recently breaking it, tried desperately to defend herself from the stranger’s violent assaults.

“As I was waiting at the bus stop a man came up to me, took my day-rider off me and just ripped it up in front of me for no reason,” she said to Hull Live .

“He then took my necklace that I was holding out of my hand and accused me of stealing it – he said ‘this isn’t your bracelet is it?’ – I told him it was mine and that my dad gave me it, but the man snapped it in half and kept it.”

Olivia says that she and the man struggled over her bag, but she managed to snatch it away and run before he could hurt her any further.

“It was really scary and I didn’t know what to do or what the man was going to do to me – I was just so glad I could get away.”

The “terrified” 12-year-old now says she’s too scared to go outside alone, in case it happens again.

“It made me feel really upset and sad – my dad gave me my necklace, which was a dog tag from father to daughter, and it meant something to me.

“The man was really scary and there was nobody else to help.”

Olivia told her mum about the frightening ordeal and the pair immediately reported it to the police.

Her parents, Emma Cunningham, 34, and Kirk Manston, 36, have been left in a state of shock following their daughter’s trauma, and want the man responsible to be found.

"The attack on Olivia by the man at the bus stop is just a mother’s worst nightmare," said Miss Cunningham, who also has a four-year-old son.

"It is just horrible what happened with Olivia getting her bus ticket ripped up and necklace stolen, and it doesn’t even bear thinking about as to what could have gone on if Olivia hadn’t managed to get away.

"She wants to have her freedom and go out with her friends like a normal little girl, but now it’s just so scary to let her go out again.

" I’m always calling her to check that she has got to school okay and is alright – I’m just so paranoid and always worrying about her now.

This man needs to be caught before he does the same thing again.”

Her mother said the man was in his 30s and was wearing all black, with a black cap and Adidas jacket.

Humberside Police are currently trying to find the alleged attacker and want anyone with information to come forward.

A force spokeswoman said: "We are investigating the alleged theft from a 12-year-old girl at around 3.30pm on 14 January.

"The girl reported that she was on her own waiting at a bus stop at the junction of Abingdon Garth and Noddle Hill Way when she was approached by a man. The man grabbed necklace from her hand and took and destroyed her bus ticket.

"If anyone witnessed the incident and can help with our enquiry please call us on 101 quoting reference 16/14996/19."