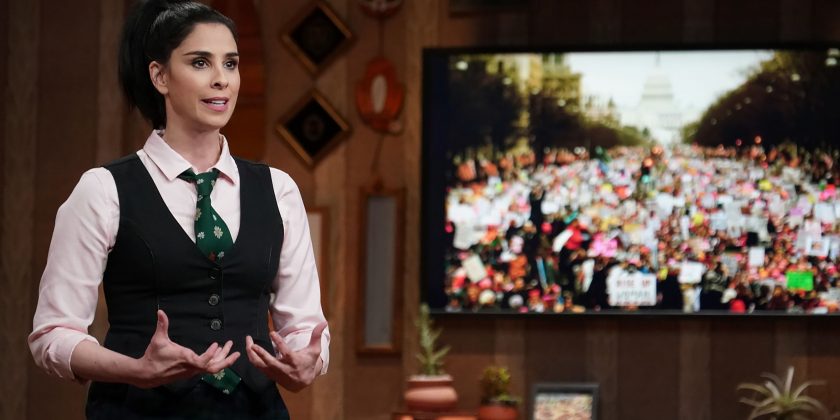 Many politically minded folks are freaking out about tomorrow’s midterm elections, even the funny ones like Sarah Silverman.

Her busy schedule in the next 48 hours includes attending the premiere of her new animated film “Ralph Breaks the Internet” on Monday night, waking up early to vote on Tuesday and then going to work on her Emmy-nominated Hulu show “I Love You, America” (with a new episode streaming Thursday), for which she’ll write her monologue overnight as the election results are coming in.

Sarah Silverman gives monologues with her personal political beliefs and also reaches out to those with opposite views on her Hulu show "I Love You, America." (Photo: ALI GOLDSTEIN/HULU)

Maybe there’ll be some celebration in there, too, but “I don’t know,” says the Democrat-leaning comedian during an interview about the “Wreck-It Ralph” sequel, in which Silverman reprises her role as video-game princess Vanellope von Schweetz. “I’m on the edge of my seat. I’m trying to be hopeful.”

Silverman gets a lot of her own political opinions out on “I Love You, America,” in addition to comedy bits with pals like Fred Armisen and Maya Rudolph (who played Jesus and Lady Liberty respectively in recent episodes) and interviews with political figures such as Bernie Sanders and Cory Booker. But Silverman has reached across the aisle as well, having dinner with a conservative Wyoming family and attending a pro-life group meeting, to get an opposite point of view from her own.

She says she’s “fundamentally changed by the people I’ve met and interviewed and talked to. I love doing it.” Silverman adds that her series “oddly has some parallels” to her “Ralph” sequel. “To me, my show is like a ‘Mister Rogers’ for adults. It’s acknowledging that we are all kids plus time.”