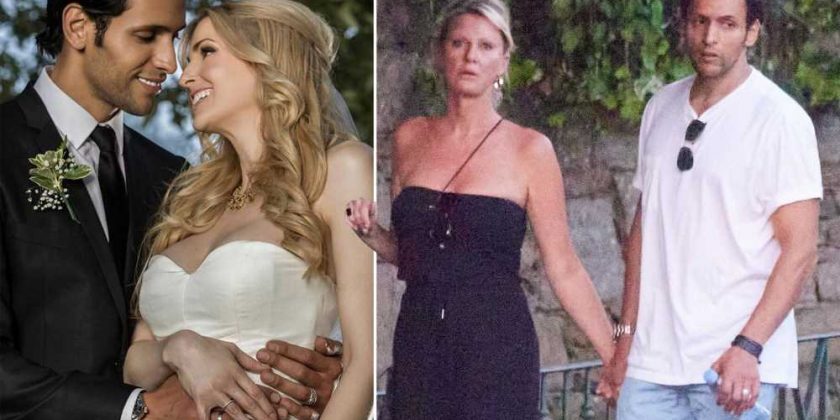 Sandra Lee cozies up to new boyfriend in St. Tropez amid Cuomo’s scandal

Sandra Lee’s new fiancé Ben Youcef is still married — and in the midst of an ugly custody battle with his soon-to-be ex-wife.

Page Six has confirmed that Youcef has been married to real estate broker Apryl Stephenson since 2015, with whom he shares 5-year-old twins.

Sources familiar with the situation confirmed to us that Youcef’s divorce from Stephenson is not yet final.

Stephenson herself also confirmed to Daily Mail they are still married.

“We are going through a divorce and I wish Ben and Sandra the best of luck. But I have nothing more to say,” Stephenson, 44, told the outlet.

But a friend spilled the beans of the tense, ongoing divorce, saying, “Ben is an opportunist. I’m sure he is loving the media attention he is getting. He craved this sort of attention for several years and now he has it. Months ago, he told people he is dating a ‘celebrity;’ he was so proud to say it.

“Poor Sandra. She’s gone from a sexual predator in Andrew Cuomo to Ben, an opportunist. He has his own agenda.” 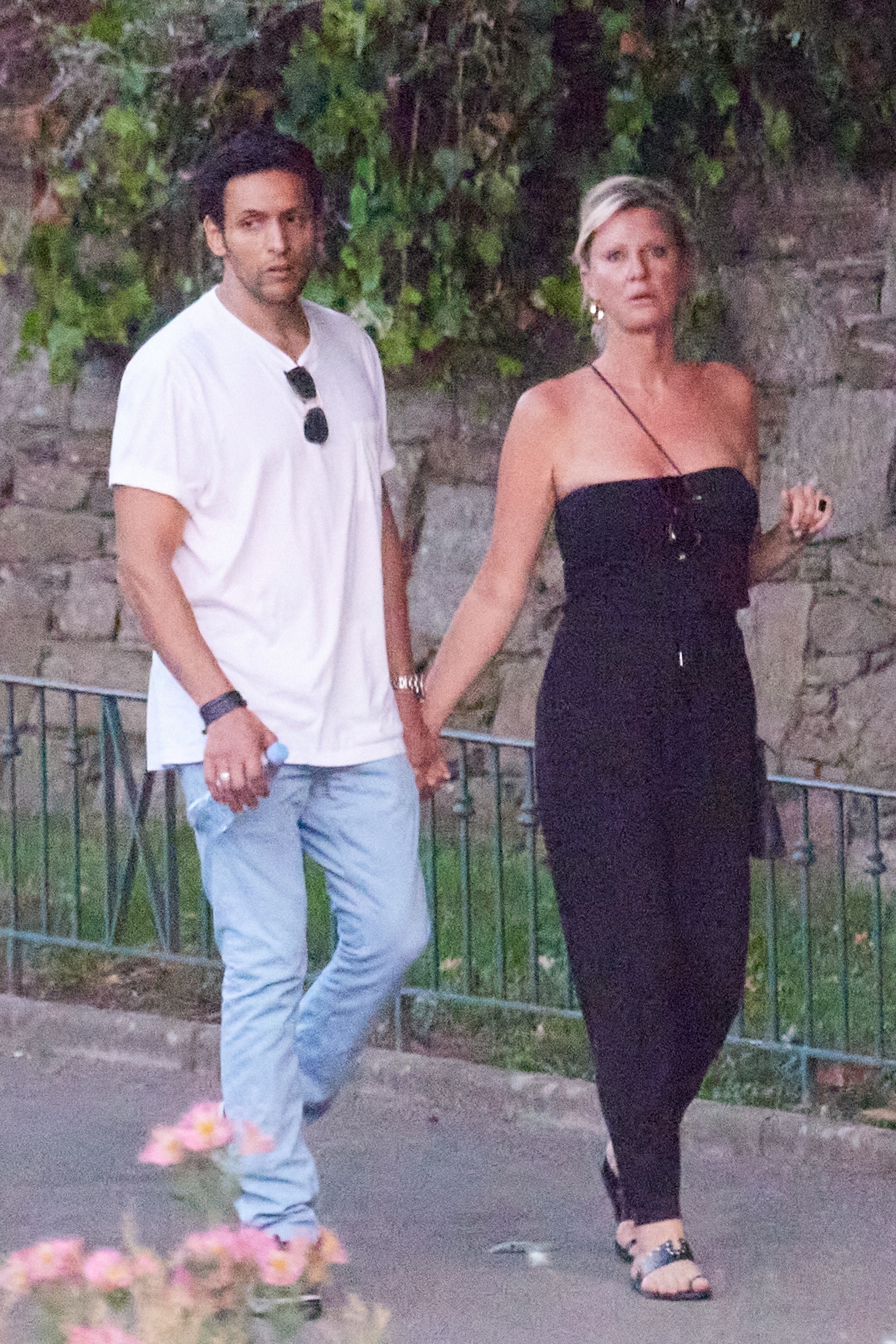 Lee and Youcef were first seen together in St. Tropez earlier this month as her ex, New York Governor Cuomo, was accused of sexually harassing multiple women. He resigned last week — days before Page Six exclusively revealed Lee, 55, had gotten engaged to the 46-year-old Algerian actor.

Sandra Lee cozies up to new boyfriend in St. Tropez amid Cuomo’s scandal

However, those who know Lee say both she and Youcef are fuming at what they see as an attempt to smear their relationship.

“Sandra would never be with a man who wasn’t completely dedicated to his children and focused on their well-being,” a source told Page Six.

“Both Sandra and Ben have come from past relationships with narcissists. This is their one shot at happiness together and the jealousy factor from an ex-wife is what’s behind this.” 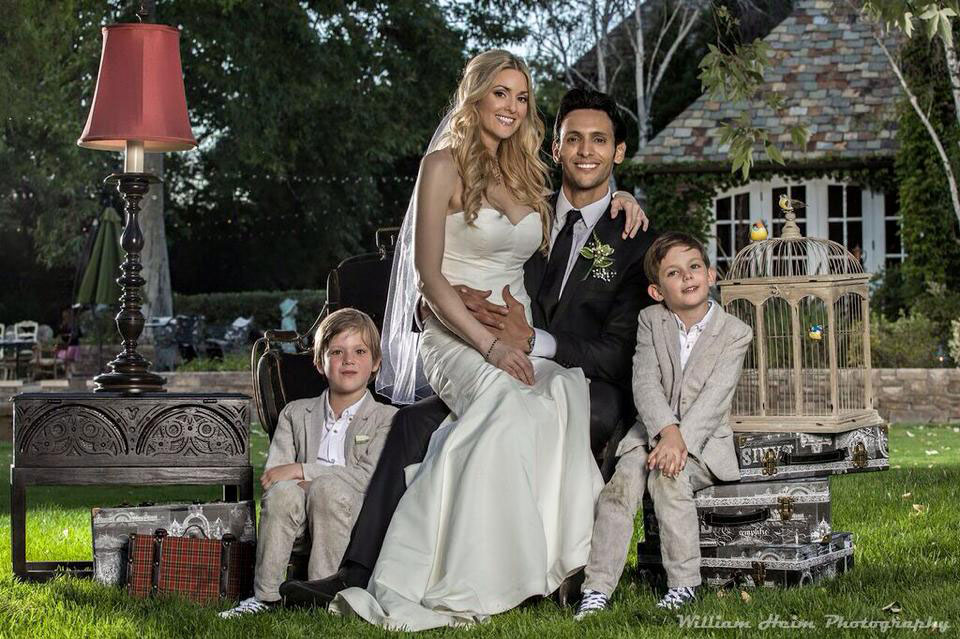 Stephenson has two older children with her first husband, and the source said: “Even after their split, Ben looked after Apryl and all the kids.”

We’re told that Stephenson is now believed to be seeing Roman Zarudyanskiy, a coach of sorts based in Las Vegas who claims, “I help high-performing men awaken their sacred masculine Warrior within.”

As we previously revealed, Youcef was discovered by director Steven Spielberg, who cast him in his 2005 movie “Munich,” and then moved to LA where he’s landed guest spots in shows including “Law & Order,” “NCIS” and “Chicago P.D.” He is also an interfaith leader.

Youcef married Stephenson in her hometown of Murrieta, Calif. on June 7, 2015, and in July 2018, Stephenson filed for legal separation after three years. Their twins, a boy, Harris and a girl, Hannah, were born in December 2015. Stephenson also has a set of twin boys from a previous relationship. 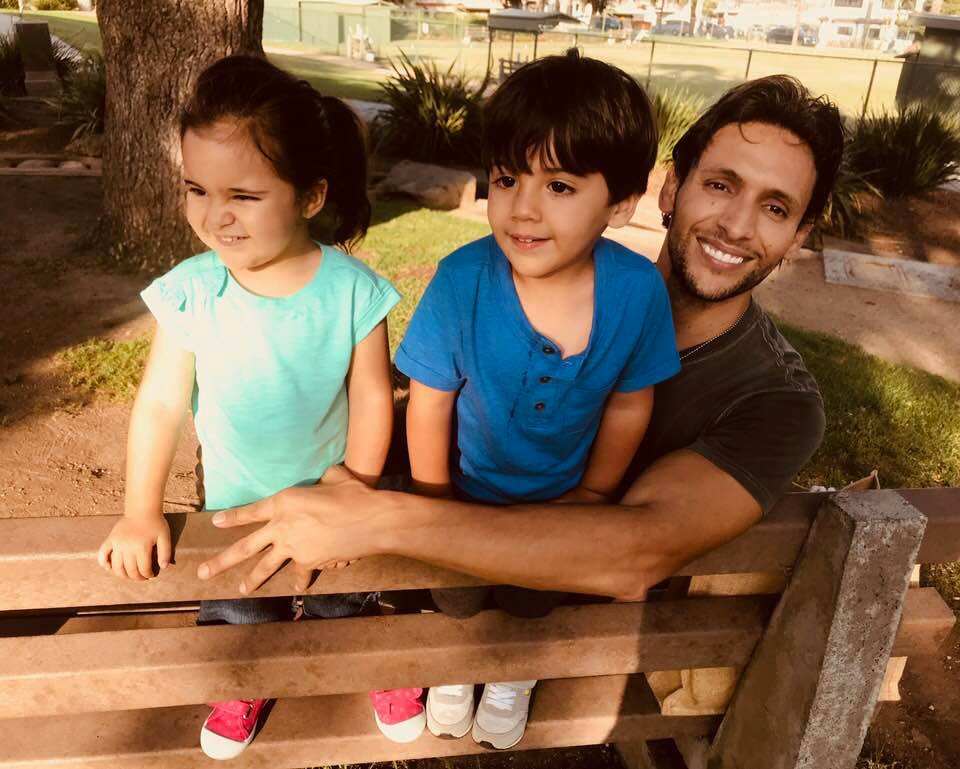 In December 2017, the couple and their children posed for Christmas photos on the cover of Bear Creek Living magazine, where Stephenson gushed about moving back to the county where she grew up with her husband and kids.

She told the mag that she met Youcef when they were next-door neighbors in Santa Monica, Calif., adding, “I never thought in a million years I would date my neighbor.”

The story added, “She and Ben are blessed with four children (two sets of twins), Hudson, Holden, Hannah, and Harris. the older boys just turned 9 … While the children are still deciding what they want to be in the future, Holden may become an actor. He idolizes Ben.”

But things soon turned bitter, as divorce papers exclusively obtained by DailyMail.com report that Youcef wants joint legal and physical custody of their twins and that his estranged wife is fighting him in court.

Court declarations filed by Stephenson’s parents, Dan Stephenson, a prominent real estate developer, and his wife Beverly, accused Youcef of not being a responsible parent regarding their children’s hygiene.

Beverly alleges in her declaration that her daughter’s marriage to Youcef had serious issues from the beginning and that he never moved full-time into the marital home in Murrieta but rather stayed in his apartment in Santa Monica and would visit on the weekends.

She also alleged that when the twins were of toddler age “Ben was little assistance to Apryl in caring for the children other than holding them.” 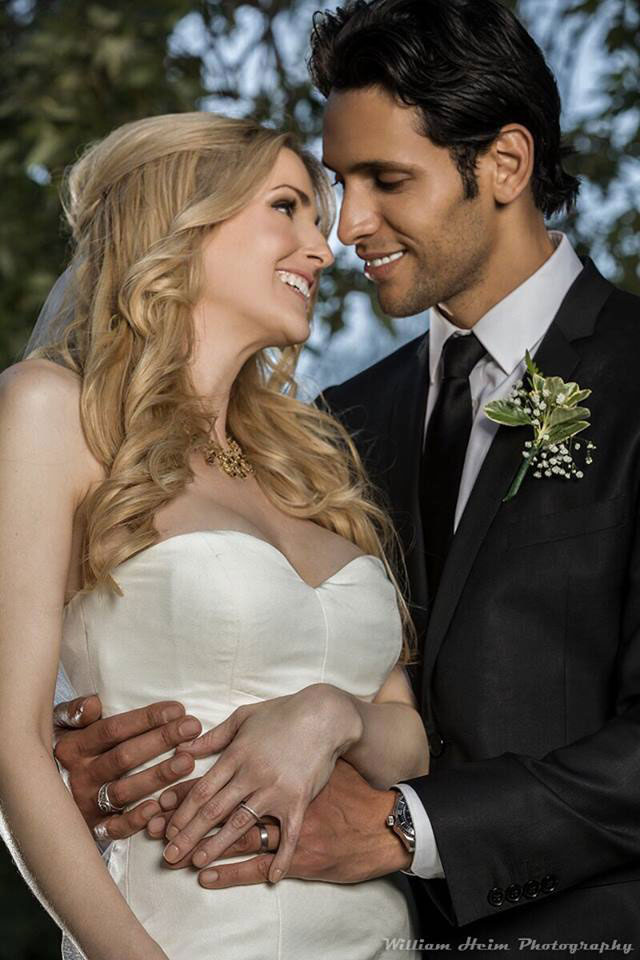 After the couple separated, Youcef would reportedly spend his weekends with his children at a guest house on his in-laws’ property in Murrieta. Beverly said, “My husband and I deemed it was safest for the twins.”

But she then claimed in a court filing that she had observed “he was ill-equipped to properly care for them. He did not honor a routine. He did not bathe them or brush their teeth or take time to change their clothes or comb their hair.”

She also alleged that Youcef had failed to watch out for his children’s safety, including not buckling them up in car seats.

“Ben does love his children and they love him,” she said. “I do not believe Ben is capable of caring for his children at this time any more than he has in the past until they are a great deal older and into their teens.”

In court documents, Youcef denied “the baseless allegations.” Sources close to Youcef say he is still financially supporting Stephenson and their children.

He vehemently denied the childcare claims made against him, as a rep told Page Six that they were “lies and fabrications … as you are well aware these sorts of lies are typical in divorce cases.”

In documents Youcef filed in October 2020, he claimed that he receives $900 a month in unemployment compensation and $1300/month from acting. 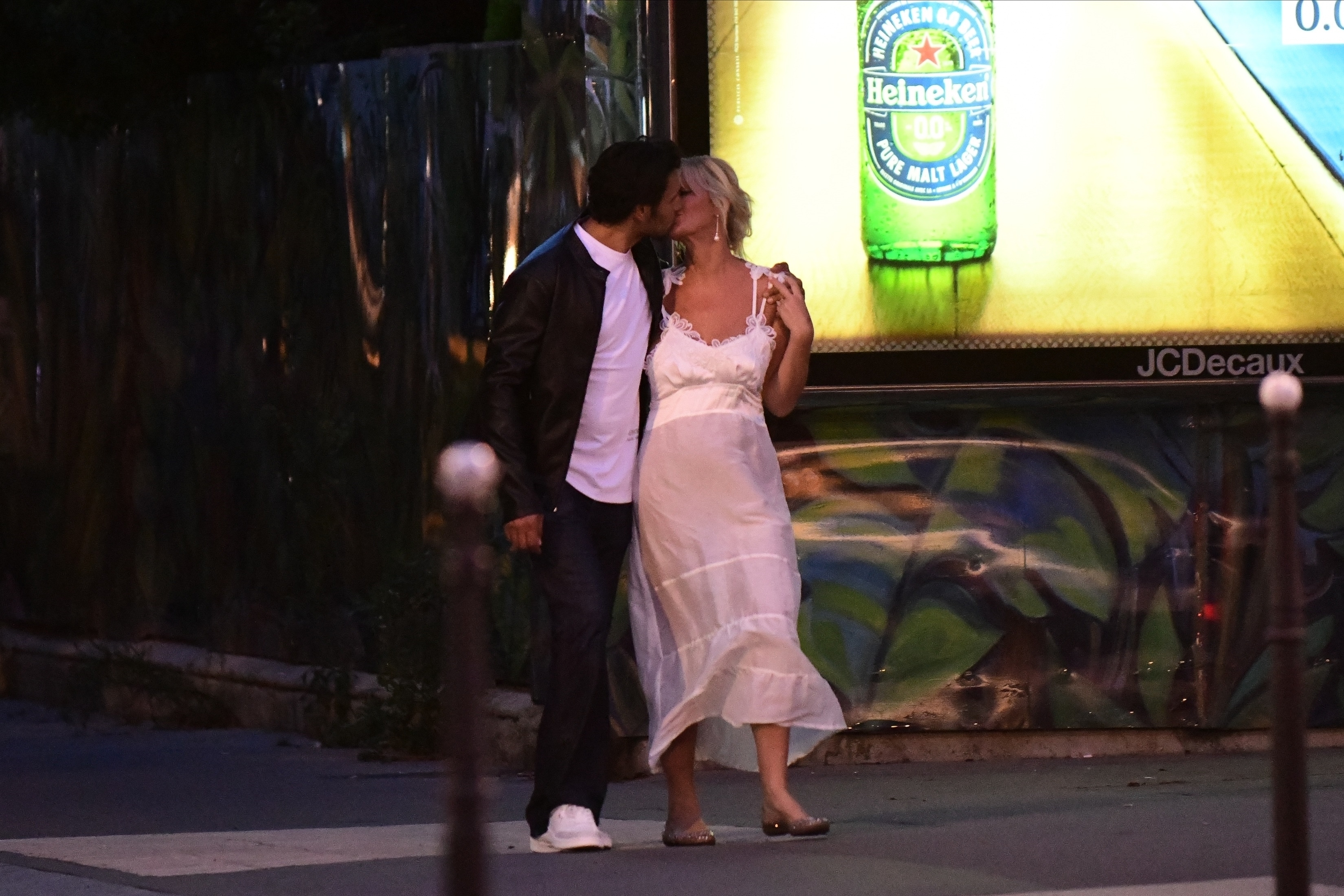 His new fiancée, however, is reportedly worth $20 million and bought a Malibu beach house for $3.4 million dollars in late 2020 after moving out of the New York home she shared with Cuomo.

The source who knows them said, “It’s damaging to both Sandra and Ben, they had both been single for over two years when they met each other this past spring.”

Stephenson declined to comment to Page Six, as did reps for Lee.