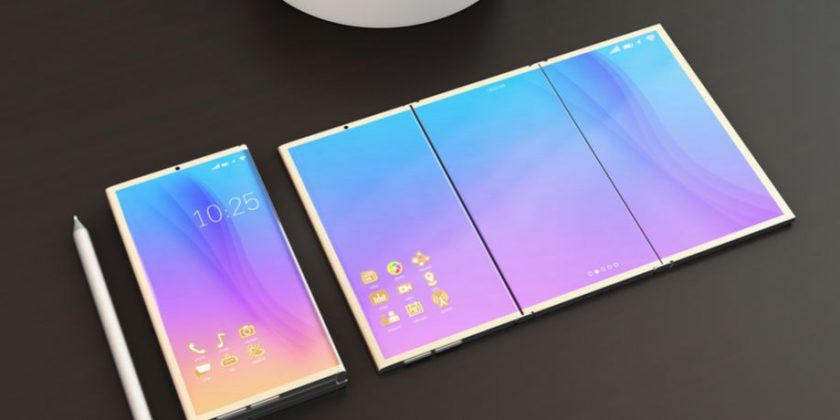 Samsung demonstrated earlier today that when it comes to smartphones, they know when to fold ’em. At their developer conference, they showed off their first folding display that is actually likely to hit the market. It should be in phones as early as next year. In a piece called, “Samsung’s ‘Infinity Flex Display’ demo shows future of foldable smartphones,” Apple Insider confirms many of the details that appeared first as rumors.

“Teased for weeks and unveiled at Wednesday’s Samsung Developer Conference, the Infinity Flex Display potentially allows for the creation of a mobile device that is the size of a tablet, but can be resized by the user depending on their needs. The on-stage demonstration for the prototype showed the device was able to be folded in half, with the screen ending up inside the fold. “

Many early folding phone demos showed phones being folded in the opposite direction, with the folded screen on the outside. This eliminated the need to include an additional display. On modern smartphones, Pixel dense OLED displays are among the most expensive components. The article mentioned that there is no designated time for release.

“Samsung did not advise when the first smartphone using the display will be available, but it is claimed the South Korean tech giant can start mass production of the Infinity Flex Display “in a matter of months.”

It is clear from the demonstration that there are still details to be worked out. Samsung had the stage dimmed during the demonstration so that gathered reporters could not adequately see the device. They didn’t want it to be closely analyzed by the press. The Verge photographers did note that the device had large bezels, and was clearly a work in progress.

Samsung wanted to be the first to announce such a product. But they were beaten to the punch by a Chinese manufacturer. The Royole FlexPai went up for pre-order earlier this week and is set to ship later this year.

Samsung did reveal a few more details about their version of a folding tablet. In tablet mode, it will measure 7.3″ diagonally but there is no word on the size of the phone display when folded.

On the software side, Samsung has come up with a few of their own solutions. But in a separate announcement, Google has acknowledged that they are working on including foldables into the Android OS. They have been working closely with Samsung on the software.