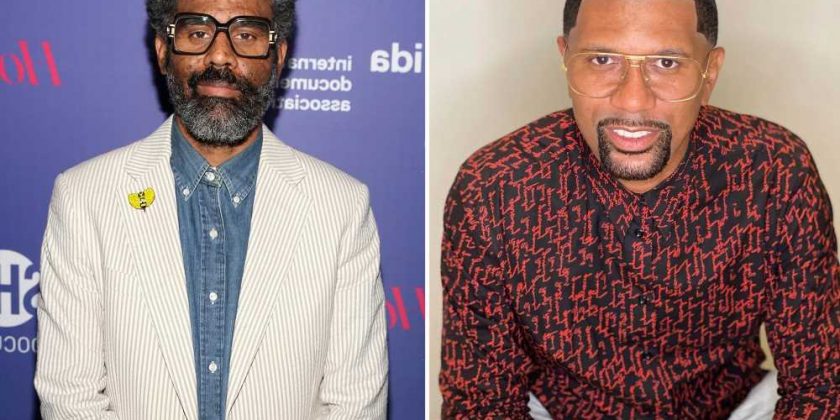 Rick James was a self-professed SuperFreak who got a second life in pop culture thanks to Dave Chappelle and his “I’m Rick James, bitch” sketches with Charlie Murphy. But he was also a nuanced man with a very unique journey who moved fluidly through genres to create his signature look and sound. My “Renaissance Man” guest this week has managed to paint the full picture of James in his Showtime documentary, “Bitchin’: The Sound and Fury of Rick James.“

“People have this perception of who he is, and some of that perception is probably true,” director Sacha Jenkins told me of his latest subject. “But, you know, people didn’t know that he went AWOL from the Navy and went to Canada and was in bands with Neil Young and played with Joni Mitchell and all these folks. His manager snitched on him, and he got fired. He had to serve time for deserting the military.”

Sacha said James went back to Canada to escape the racism he felt in the US, but all of his contemporaries had gone to California. So he went to the West Coast.

“Rick, when he started out, he wanted to be a rock star. So when you look at the configuration, the full realization of the Rick James persona, he took a little from here and a little from there and a little from here, because he was authentic to rock and roll and authentic to soul and authentic to funk. He was able to create this persona that was contemporary to George Clinton and P Funk and all those groups, but very unique to himself,” Sacha told me. “And to be a brother at that time, who was able to move in so many different circles, that’s like being fluent in multiple languages. So he was a linguist on another level.”

Sacha is also fluent in many genres. He’s a journalist, filmmaker, musician and graffiti artist. He’s sort of become the bard of hip-hop. And he has teamed up with the legendary rapper Nassir “Nas” Jones to create an epic Showtime project called “Hip Hop 50,” which will mark a half century of an art form that has outlasted its harshest critics and become a lifestyle and a heartbeat. It will debut later this year and run into 2023.

“It’s about three years of programing, various films and other projects that we and Mass Appeal are producing, directing. So ‘Hip Hop 50’ isn’t a film. It’s a program that is going to encompass lots of films that are inside of what people call the culture,” he said. “So it’s not just break dancing or graffiti. It’s dancehall, reggae, it’s fashion. It’s all the things that encompass how we live and express ourselves.”

Sacha didn’t just chronicle hip-hop. He lived it. He grew up in Silver Spring, Maryland, where his father was a filmmaker and taught at Howard University. But his parents split up, and, in 1977, he and his mother moved to Queens. It was there when he first discovered the all encompassing movement of hip-hop, which his mother essentially deemed noise pollution. She’d call the cops on the DJs playing loud music into the night.

“And it turns out those DJs were called the Disco Twins, who are legendary. So I grew up being serenaded by hip-hop, but I also understood that my father was a documentary filmmaker. My mom is a painter,” he said. “So I understand the value of culture. So this thing that became hip-hop when my mom told me to go outside and play in 1977, I had a Nerf football. Other people had magic markers … ‘I was like, what is this guy with a magic marker?’ He wrote his name on the slide. He’s like, ‘This is graffiti.’”

It was a revelation to Sacha. He became a graffiti artist and chronicler of the art form, which moved him outside of his natural environment and helped develop his curiosity, his social group and his career. He said it connected him with kids from different neighborhoods and economic statuses. He started a graffiti zine and then co-founded Beat Down Newspaper. He started writing for bigger outlets, such as Vibe and Spin, and co-authored “Big Book of Racism,” which became a television show. He started making documentaries.

“Now I see myself as a shepherd, someone who is here to sort of make sure that our stories are told the right way from our perspective, because for so long they weren’t told by us. And it makes a huge difference,” he said.

I love graffiti. You see it all over the Big Apple but you never see it in progress. These artists are acrobats climbing to overpasses, buildings, train yards to tag under the cover of night. So he spilled a bit more about the process of tagging trains back in the day, and let’s just say it was a contact sport with turf wars.

Sacha grew up across from the Astoria Houses and he said hip-hop founding father Melle Mel recorded his first ever song in his building because there was a jazz musician with a four-track who also lived there. He went to the same junior school as Nas. They came up together in the business and are kindred spirits.

“His dad was a musician. My dad was a filmmaker. I grew up with people better looking than me, smarter than me, more creative than me. But they didn’t have the cultural advantages that he had and I had,” Sacha said.

Sacha — who is in two bands, including the White Mandingos with rapper Murs and a punk group called the 1865 — has immersed himself in so many worlds including the punk scene where he said white kids would slam dance and stage dive. He also said they’d toss White Castle hamburgers at shows, which is disrespectful to the crave case. But he noted that music is a release for everyone, regardless of your background or race.

“I had the benefit of experiencing all of that with music and learning that bouncing from culture to culture … It’s all the same thing. It’s just a different expression. The white kid who likes heavy metal, likes his boombox and beer, girls, and the hip-hop kid is the same kid.”

But Sacha holds some strong opinions. Although some people have called the White Mandingos’ music “rap rock,” he said he isn’t a fan of the genre, calling it “garbage.” When I asked him for his top five rappers of all time, he gave me a great list: Nas, Ghostface Killah, Queens native G Rap, Outkast and Wu-Tang Clan, which he chronicled in his “Wu-Tang Clan: Of Mics and Men” documentary.

While he didn’t put Jay Z on that list, he said the mogul was one of the most important people in the culture. In fact, he said Jay Z was responsible for him making his 2015 “Fresh Dressed” documentary about the history of fashion in hip-hop. The seed of the film started out as a commercial for Rocawear, but Sacha convinced the Roc Nation boss that it should be expanded into a full film.

“I’m very grateful for Jay Z because I might not be where I’m at if he didn’t give me an opportunity,” Sacha said.

As for a musician’s biopic he’d like to direct, he didn’t hesitate to say Jimi Hendrix. But Sacha is probably pretty busy right now. And I will do the calculations in 2023 when “Hip Hop 50” finishes, but I can safely assume that 90 percent of the documentaries I will be consuming over the next three years will have Sacha Jenkins’ name splashed through the credits. And that is one heck of a footprint.

Detroit native Jalen Rose is a member of the University of Michigan’s iconoclastic Fab Five, who shook up the college hoops world in the early ’90s. He played 13 seasons in the NBA, before transitioning into a media personality. Rose is currently an analyst for “NBA Countdown” and “Get Up,” and co-host of “Jalen & Jacoby.” He executive produced “The Fab Five” for ESPN’s “30 for 30” series, is the author of the best-selling book, “Got To Give the People What They Want,” a fashion tastemaker, and co-founded the Jalen Rose Leadership Academy, a public charter school in his hometown.