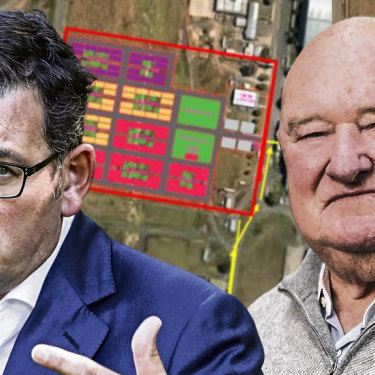 As dawn broke on one of the most fateful days of his premiership, Daniel Andrews’ first waking thought was Linfox.

It was March 27, 2020. In a matter of hours, Andrews would dial into a national cabinet meeting and advocate for returned travellers to be quarantined in city hotels, a policy that would ultimately carry disastrous consequences for Victoria.

But at 6.37am, his immediate priority was to ensure the family business of his friend and corporate mentor Lindsay Fox was kept in the loop.

“CEO of logistics at Linfox happy to help on any hotel arrangements,” the Premier texted his chief of staff, Lissie Ratcliff. “Just needs a point of contact.” 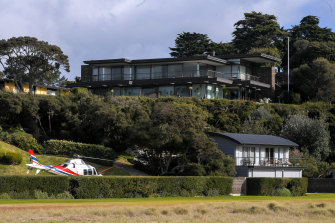 Seat of power: The Fox compound in Portsea where Daniel and Catherine Andrews dined at the start of the year.Credit:Eddie Jim

It is not the only time Linfox founder Lindsay Fox, described by a senior Labor figure as the Premier’s “go-to billionaire,” has been privy to a change in government policy before ministers.

And it is why the opposition is calling on the Premier to distance himself from any government decision on whether the Avalon Airport site leased by the Foxes should house a new quarantine facility.

“Given the extent of his personal relationship with the Fox family, the Premier should recuse himself from any cabinet deliberations on a quarantine facility or other decisions affecting the commercial interests of Linfox,” shadow treasurer Louise Staley tells The Age.

In Parliament last week, Andrews ridiculed Staley as a conspiracy theorist for asking him how often he had visited the Fox family’s Portsea mansion in recent months. The sharpness of Andrews’ response was telling.

On his own side of politics there are concerns that his special relationship with one of Australia’s richest and most influential families is clouding his political judgement and potentially compromising his government. 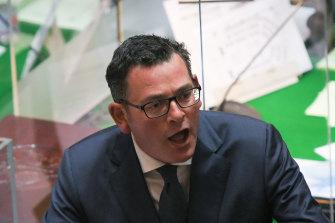 Victorian Premier Daniel Andrews has declined to say how many times he visited the Fox family in recent months.Credit:Eddie Jim

There is no dispute that Andrews is a regular and welcome visitor to the Fox’s den. The most recent occasion The Age is aware of was January 9, two days after Andrews returned to work from a short summer break.

It was a Saturday night and the Premier and his wife, Catherine, made the familiar drive from their Mulgrave home to the Fox’s sprawling cliff-top compound that overlooks Portsea’s Point King Beach.

Seated around the table were Lindsay Fox and his wife, Paula, the Premier and his wife, tech entrepreneur Andrew Bassat and Luke Sayers, a former PricewaterhouseCoopers chief executive. Former federal finance minister Mathias Cormann, marooned in Perth by COVID-19 restrictions, was also invited but unable to attend.

Andrew Fox, the overseer of the family’s property investments and a collector of rare and expensive french wines, played host and sommelier. His cellar includes bordeaux from Chateau Haut-Brion and Chateau Lafite Rothschild and burgundy from Domaine Leroy and Domaine de la Romanee-Conti that, depending on the vintage, can fetch as much as $10,000 a pop. 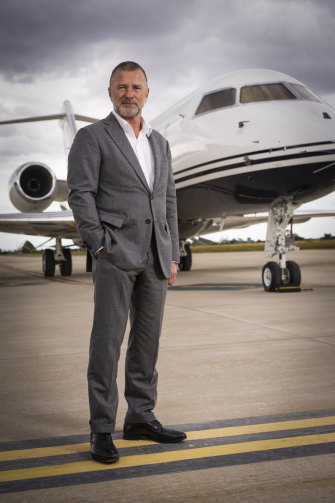 Those in attendance insist business was not the main fare that night and the proposed quarantine facility at Avalon was not discussed. The dinner had been arranged so that Lindsay and Paula, a skin cancer survivor, could thank the Victorian and federal governments for their contribution to a new melanoma research and treatment centre planned at The Alfred hospital.

Yet, while each guest took turns toasting Paula Fox’s good health and philanthropic work, the table was laden with shared interests.

Son David Fox, the executive chairman of Avalon Airport, is a shareholder in tech startup Elenium Automation, which has developed a touchless, check-in kiosk that can scan for symptoms of COVID-19.

Sayers, who personally pitched the Elenium kiosks to Andrews, owns an eponymous business investment and advisory company that acts as a consultant to Elenium. The Fox family owns 14.5 per cent of Sayers’ firm and Bassat is also an investor.

Elenium, based at the Essendon Fields development part-owned by the Fox family, is trialling its kiosks at Avalon and is currently in advanced negotiations with the Andrews government to potentially roll them out at aged care facilities, sports stadiums, government buildings and conference centres. Although other businesses were invited to tender for the work, it is not known if any other companies have lodged a bid.

Linfox has held extensive contracts with state and federal governments for years. Part of its success is an uncanny knack of offering solutions to problems governments don’t know they have.

Victorian government insiders who spoke to The Age in confidence said the Premier had a tendency to champion ideas pitched by the Fox family for which the commercial benefit to Linfox was clear.

In 2019, the Premier threw his personal support behind a Fox proposal to sell Victoria Police’s sprawling Wellington Street stores in Collingwood and contract out the warehousing and transport of police files, including evidence, and equipment, such as guns, handcuffs and police cars, to Linfox.

Linfox put serious time and energy into the proposal, enlisting the expertise of its newly appointed president of government and defence, former Victoria Police assistant commissioner Doug Fryer, to bolster its pitch. 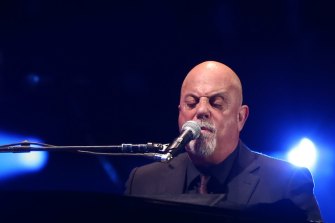 Promoter Michael Gudinski, a friend of the Fox family and Daniel Andrews, secured tickets for the Premier and his wife to see Billy Joel at Madison Square Garden in 2017.Credit:Shutterstock.com

Andrews and Andrew Fox, one of three Fox sons who control parts of the family business across logistics, airports and property, are particularly fond of one another’s company, with a shared passion for good red wines and fine whisky.

Through Fox and friends like Gudinksi, Eddie McGuire and multimillionaire businessman Gerry Ryan, Andrews has gained entry into the seductive world of Melbourne’s uber-rich.

“They spend a lot of time in one another’s company talking shit and coming up with ideas that can bring their collective interests to bear,” a Labor source says.

Shortly before Christmas, staff who work for Andrews, Andrew Fox and Ryan were treated to a nosh-up at Vue de monde, one of Melbourne’s priciest restaurants. In response to questions from The Age, Andrews declined to say who picked up the bill.

Ryan, like the Foxes, is an investor in Luke Sayers’ consultancy. Like Fox, he stands to benefit if the Andrews government backs Avalon as the site for a new quarantine facility.

The registration of interest (ROI) invites parties to nominate possible locations, design and management of a new facility. This “information gathering exercise” is being run by the Department of Premier and Cabinet, rather than Victoria’s standalone agency for COVID-19 quarantine, CQV. The ROI lists Avalon and Melbourne Airport as sites already under consideration by the government and closes on March 1.

Earlier this month, Linfox circulated to government its “Avalon Airport Quarantine Soulution [sic],” a seven-page brochure setting out its concept for housing returned travellers in caravans, mining dongas or other portable housing accommodation in a purpose-built village located directly behind the airport’s newly constructed international terminal. The government considered a similar offer by Avalon last November to quarantine seasonal workers but declined to take it up due to infection control concerns.

A source with knowledge of the negotiations told The Age that Ryan, the owner of Jayco Caravans, has commenced talks with Grove Group, a company which hires out portable buildings, to provide housing for the quarantine facility.

Bill Kelty, one of Lindsay Fox’s closest friends and a Linfox director who sits on the Avalon Airport board, says Avalon is an obvious site for a quarantine facility. He also argues Avalon will only be chosen if it meets every public test.

“There is nothing we would do which would be improper,” he says.

“The only reason quarantine comes up at Avalon is people, by and large, are coming in by plane.

“You need access to transport and closeness to regional facilities and to build reasonable facilities for the people. The only reason quarantine comes up at Avalon is it ticks those boxes.”

While relationships between political and business leaders are normally transactional, Lindsay Fox is fiercely loyal to the people he does business with. Kelty says once Fox identified Andrews as a leader who could get things done, it naturally followed that he would develop a strong, personal affinity with the Premier and his interests. 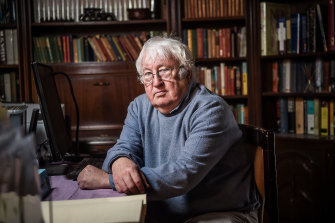 It came as no surprise to Kelty that, when Andrews was being castigated by other business leaders in the depths of Melbourne’s COVID winter, Lindsay Fox publicly backed the Premier.

“Lindsay is one of those people who will stick to you when everyone is against you. For Lindsay, loyalty is very important.”

To illustrate this point, Kelty cites Fox’s support for Jeff Kennett after the former premier was voted out of office, his enduring friendship with Tony Abbott and, most recently, the faith he maintained in George Pell throughout his criminal prosecution and ultimate acquittal on child sex offences.

Loyalty has served Fox well. Whether his relationship with Andrews serves Victoria’s interest is a question now being raised by rival businessmen, the state opposition and critics of the state government’s broader handling of the pandemic.

Lindsay Fox makes no secret of his ambition to develop Avalon into an intermodal transport hub that can open up new and more efficient passenger and freight routes between Australia and south-east Asia. For his family to realise this ambition, it needs help from government.

The federal government contributed half the construction cost of Avalon’s international terminal and Andrews in October 2019 led a government delegation to Vietnam to help the Fox family secure a deal with budget carrier VietJetAir to run direct flights between Ho Chi Minh City and Avalon.

However, before the pandemic struck, Avalon’s daily commercial passenger traffic comprised of just one Air Asia flight to and from Kuala Lumpur and a handful of Jetstar shuttles to Sydney and the Gold Coast, the latter secured by a $12 million subsidy by the Andrews government.

If the Victorian government shifts its COVID-19 quarantine from city hotels to Avalon, it is likely to substantially boost the number of flights in and out of the airport. This in turn will strengthen Linfox’s argument for an airport rail extension to be built to the Avalon terminals; a crucial next step for further development of the site. Under such a scenario, the Fox family’s interests will be well-served.

Our Morning Edition newsletter is a curated guide to the most important and interesting stories, analysis and insights. Sign up here.