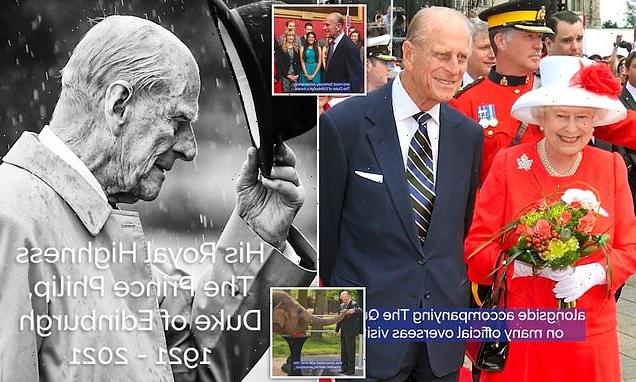 The Duke of Edinburgh was described as a ‘devoted consort’ to the Queen as the royal family’s official Instagram page shared a touching photo montage dedicated to his ‘extraordinary life’ today.

Some 1,800 guests, including senior members of the Royal Family, are expected to attend a service of thanksgiving for Prince Philip this morning at Westminster Abbey.

Ahead of the event, which will be aired from 10.30 on BBC One, the royal family’s official Instagram page shared a short photo montage dedicated to the late Duke’s life.

Among the images were photographs from the Queen’s coronation in 1953, a visit from the couple to Canada in 2010 and attending the Queen’s 90th birthday celebration in 2017, as well as snaps from Prince Philip’s final public engagement in 2017.

The caption detailed: ‘His Royal Highness led an extraordinary life – seeing active service in the Second World War as a Naval Officer, supporting The Queen as consort for over 60 years, and pursuing his many interests and convictions through his hugely varied patronages.’ 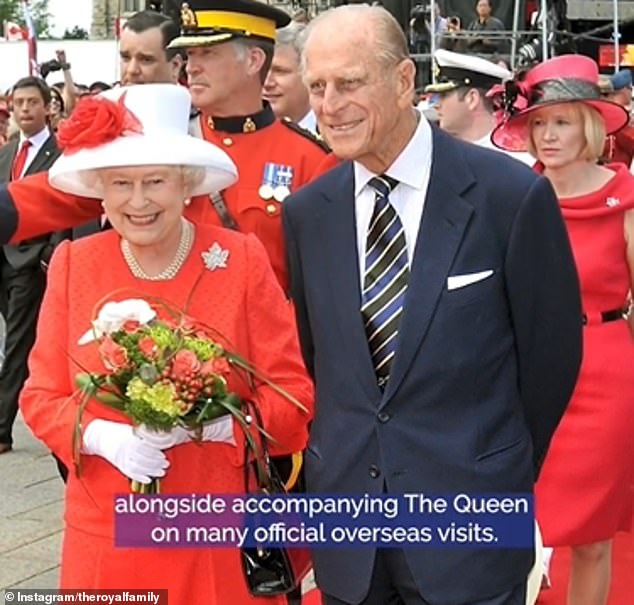 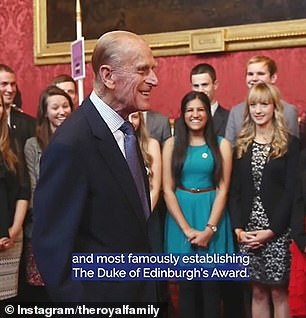 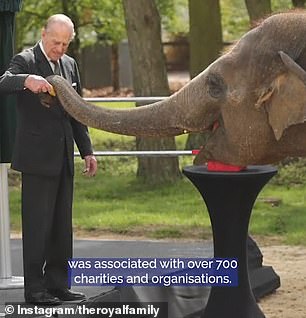 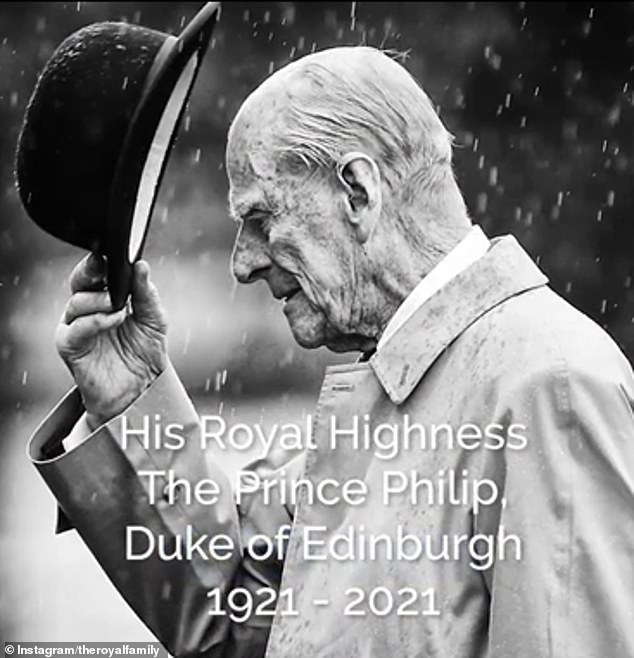 Ahead of Prince Philip’s memorial service, which will be aired from 10.30 on BBC One, the royal family’s official Instagram page shared a short photo montage dedicated to the late Duke’s life

Alongside the images, the captioning read: ‘Over the course of his life, the Duke of Edinburgh was associated with over 700 charities and organizations.

‘His interests ranged from scientific and technological developments to the welfare of young people and education, conservation and the environment, the encouragement of sport and most famously establishing the Duke of Edinburgh award.

‘Founded in 1956, the DofE award now operates in over 130 countries, helping millions of young people build skills and confidence for life.’

It continued: ‘His Royal Highness undertook over 22,000 solo engagements, including 229 solo visits to the Commonwealth countries, alongside accompanying the queen on many official overseas visits. 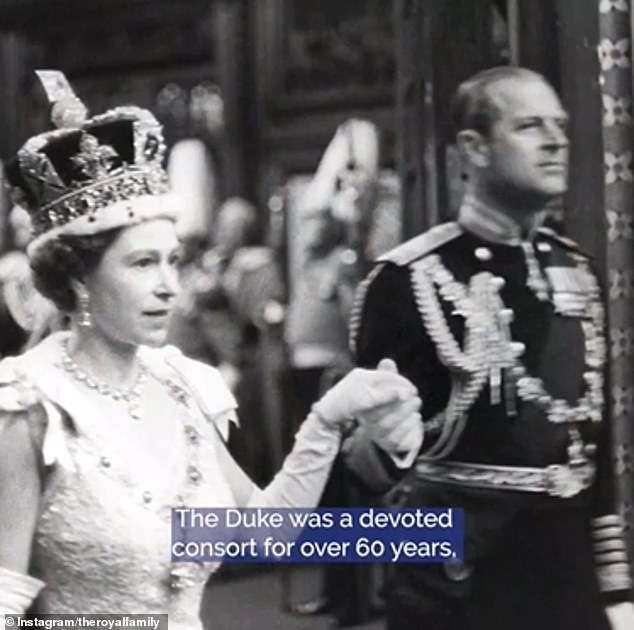 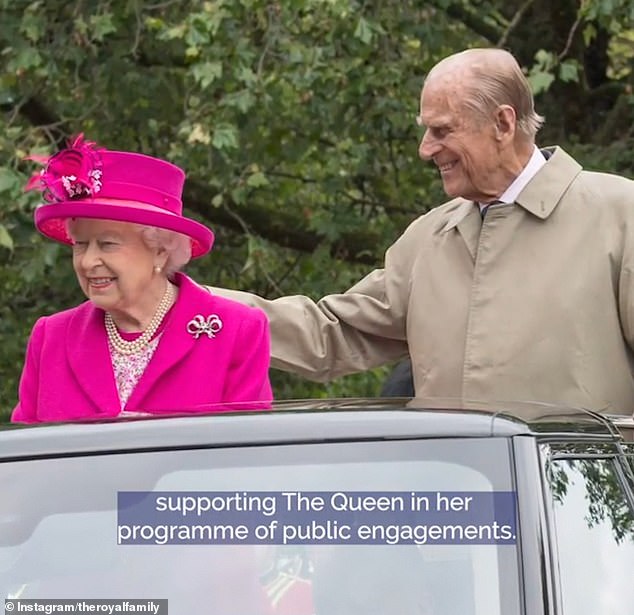 In the brief clip, the Duke was described as ‘a devoted consort’ to the Queen ‘for over 60 years, supporting the monarch in her programme of public engagements’ (pictured, attending celebrations to mark the Queen’s 90th birthday in 2017)

‘The Duke was a devoted consort for over 60 years, supporting the Queen in her programme of public engagements.

‘Following a successful Naval career, His Royal Highness maintained strong links with the military. His military appointments included Admiral of the Fleet, Field Marshal in the British Army and Marshal of the Royal Air Force.

‘His Royal Highness regularly visited the armed forces at home and overseas as well as supporting veterans and their families and paying tribute to those lost in conflict.

‘In 2017, his final public engagement was with the royal marines, one of his longest standing military afflictions.’ 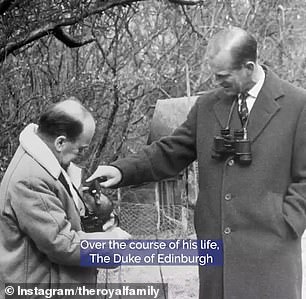 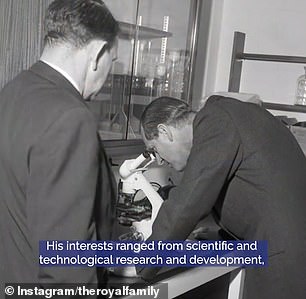 The caption shared alongside the photo montage to Prince Philip pointed to his dedication to royal service (right), completing over 22,000 solo engagements (left, Prince Philip in 1963 with the celebrated British ornithologist Sir Peter Scott, and Minnie, a Bronze Winged Duck) 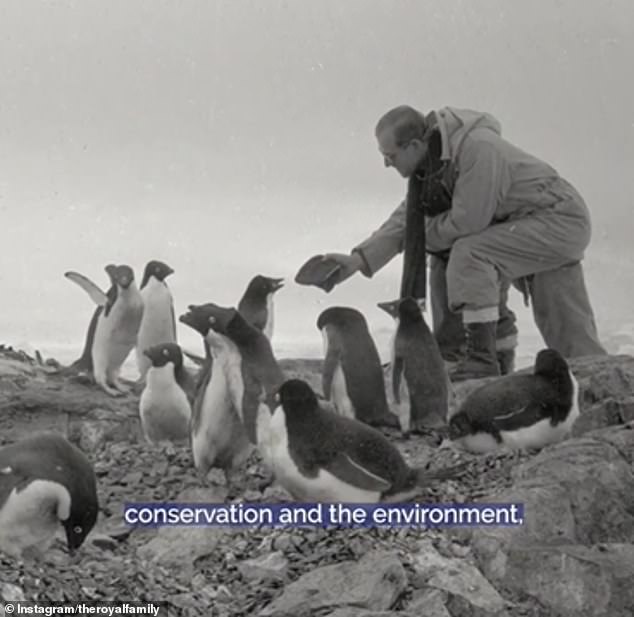 Meanwhile the Instagram caption read: ‘Today at Westminster Abbey, guests will gather to celebrate the life of The Duke of Edinburgh.

‘The Service will give thanks for HRH’s dedication to family, Nation and Commonwealth and recognise the importance of his legacy in creating opportunities for young people, promoting environmental stewardship and conservation, and supporting the Armed Forces.’

It continued: ‘His Royal Highness led an extraordinary life – seeing active service in the Second World War as a Naval Officer, supporting The Queen as consort for over 60 years, and pursuing his many interests and convictions through his hugely varied patronages.’ 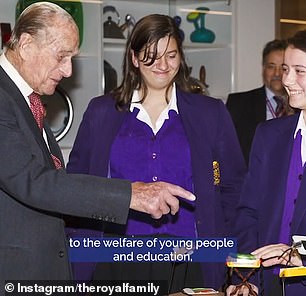 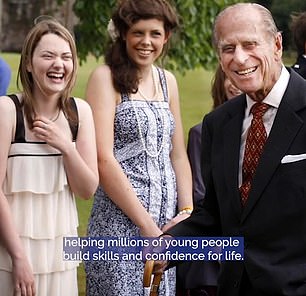 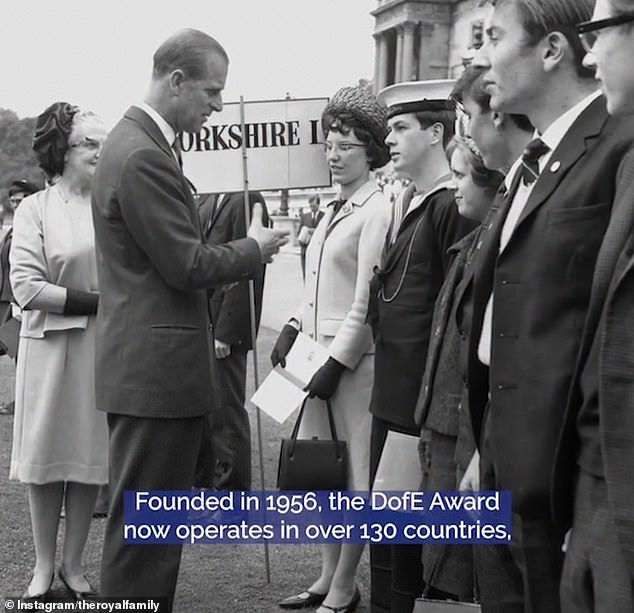 A caption on the video described how after the award was founded in 1956, it went on to operate in over 130 countries (pictured, the Duke presenting the award to recipients)

The post went on to give details of how royal fans can tune into the service, which will be aired at 10.30 on BBC One.

The Westminster Abbey service will be attended by some 1,800 guests including senior members of the Royal Family.

The Duke of Edinburgh’s four children will be in attendance, as will Charles, Anne and Edward’s respective spouses, the Duchess of Cornwall, Vice Admiral Sir Timothy and the Countess of Wessex.

Prince Andrew will make a rare public appearance and there is speculation the Duchess of York might have also been given an invitation. 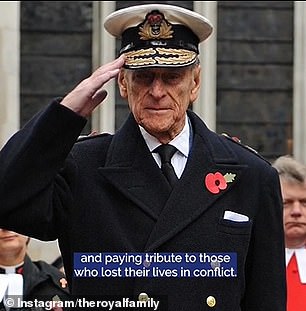 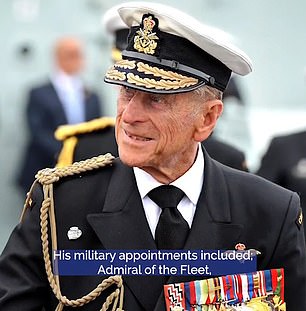 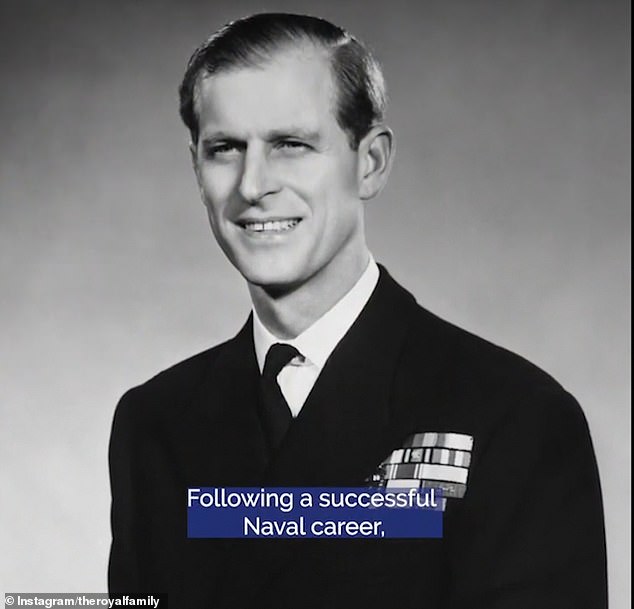 The clip described how, following a ‘successful Naval career’, the Duke of Edinburgh went on to ‘maintain strong links with the military’ 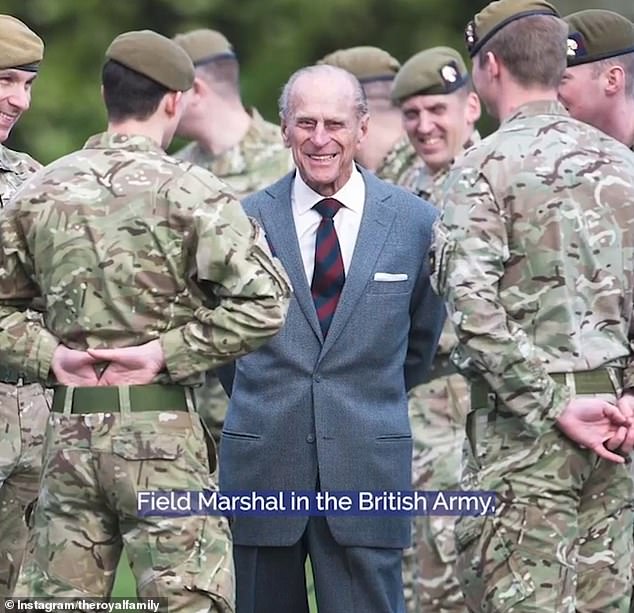 The clip listed the Duke’s roles within the military, including his position as Admiral of the Fleet, Field Marshal in the British Army and Marshal of the Royal Air Force 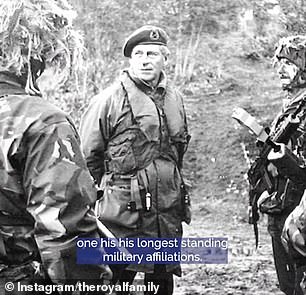 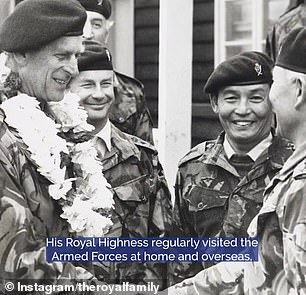 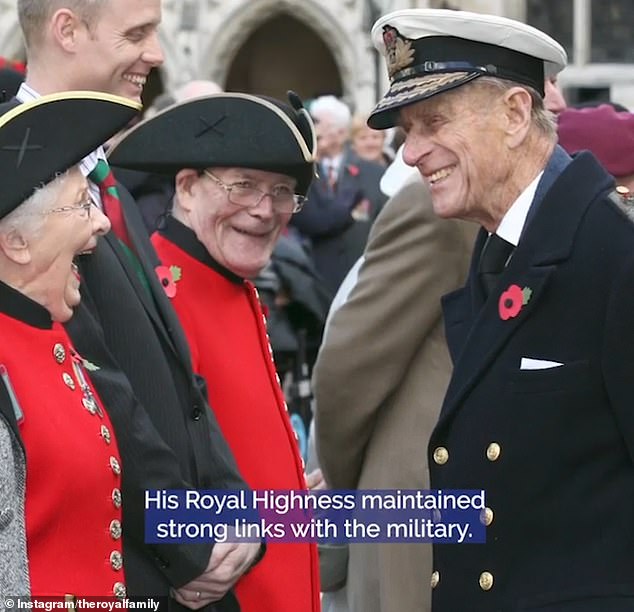 The service later today will give thanks for Prince Philip’s ‘dedication to family, Nation and Commonwealth’ 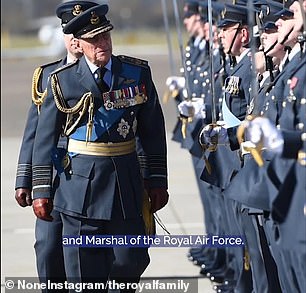 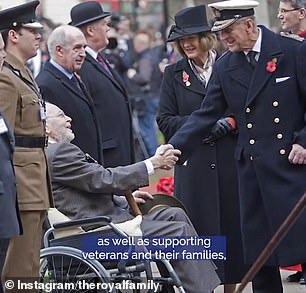 Seven of Prince Philip’s eight grandchildren will be there, including the Duke of Cambridge, Zara Tindall and Princesses Eugenie and Beatrice, all of whom will attend with their spouses.

The only grandchild missing the event is the Duke of Sussex.

The Queen is said to be determined to travel to London to mark the long and productive life of her husband Philip in what would be her first major public engagement away from Windsor Castle in nearly six months.

Royal aides revealed the 95-year-old monarch has been ‘actively involved’ in plans for the service at Westminster Abbey ‘with many elements reflecting Her Majesty’s wishes’ as the order of service was unveiled overnight. 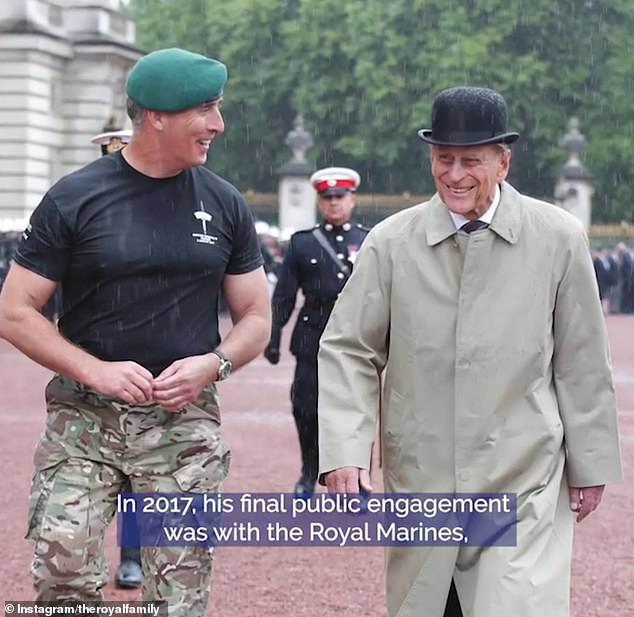 Meanwhile there were also several snaps from his final public engagement in 2017, when he joined Royal Marines outside Buckingham Palace (pictured)

It includes several elements the duke had planned for his funeral in April last year but which were forbidden by Covid restrictions at the time.

Among them is the involvement of Duke of Edinburgh (DofE) gold award winners and Sea Cadets, his expressed wish for the congregation to sing the rousing hymn Guide Me, O Thou Great Redeemer, and for clergy from the royal estates of Windsor, Sandringham and Balmoral to play a special part.

His funeral at St George’s Chapel in Windsor was limited to just 30 mourners in the midst of the pandemic and mass singing was banned, with the Queen sitting alone in a mask.

Around 1,800 guests are due at today’s service, including British and European royalty, representatives of the many charities of which the duke was patron or president, Boris and Carrie Johnson, and Sir David Attenborough.