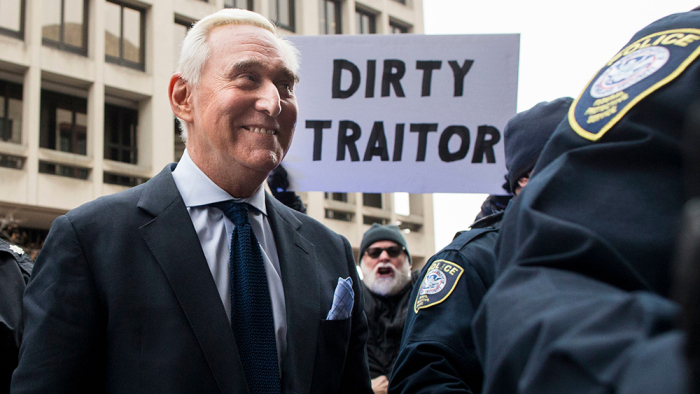 WASHINGTON — Roger Stone was expected to plead not guilty to charges brought against him by special counsel Robert Mueller. He did.

He was expected to pay close attention to his sartorial look. He did, in a neatly tailored grayish blue suit, color-coordinated tie and pocket square.

And the scene outside the federal courthouse was expected to be a circus. It was, as Stone’s supporters shouted, “We love you Roger” and a team of anti-Trump demonstrators chanted “Lock him up.” One brought a boombox to play the Beatles’ “Back in the U.S.S.R.” very loudly as Stone got in a car after the brief hearing and drove off.

Just about the only surprise about Stone’s D.C. debut as Mueller’s latest target was that he didn’t stop and talk to the media.

Stone, 66, is accused of lying to Congress about the nature of his conversations about WikiLeaks, as the investigation focused on the extent to which he knew about the pending release of hacked emails from the Democratic National Committee and later John Podesta, the chairman of Hillary Clinton’s presidential campaign.

Stone was arrested in Friday in Fort Lauderdale, Fla., but released on a $250,000 bond.

He was an informal adviser to Donald Trump during the 2016 presidential campaign, but their history dates back to the late 1970s, when attorney Roy Cohn introduced them. Stone advised Trump as he stepped into politics, which included a short-lived presidential run for the Reform Party nomination in 2000.

He has accused Mueller of engaging in a politically motivated prosecution, and said the FBI’s pre-dawn raid at his Fort Lauderdale home was excessive. He has said he will not cooperate with Mueller, as other Trump campaign officials and associates have done, but has not completely ruled it out.

“If there’s wrongdoing by other people in the campaign that I know about, which I know of none, but if there is, I would certainly testify honestly,” Stone told ABC News on Sunday.

Stone was also accused of witness tampering, as Mueller’s team claims he attempted to get Randy Credico, a radio host and Stone’s publicly identified conduit to WikiLeaks, to give false testimony to investigators.

Much of the media attention has focused on the role of an unidentified Trump campaign official who, according to the indictment, sought out information from Stone on WikiLeaks’ plans to release the email trove.

Outside the courthouse, the mix of media and placard-waving onlookers scrambled through cars to try to capture Stone as he exited. One man carried a sign that read “TRAITOR” and others waved Russian flags. Another read, “Roger Stone Did Nothing Wrong!” and called for donations to Stone’s legal defense fund. Below it was a photo of Stone, from his first court appearance on Friday, in which he is waving both his hands with victory signs.