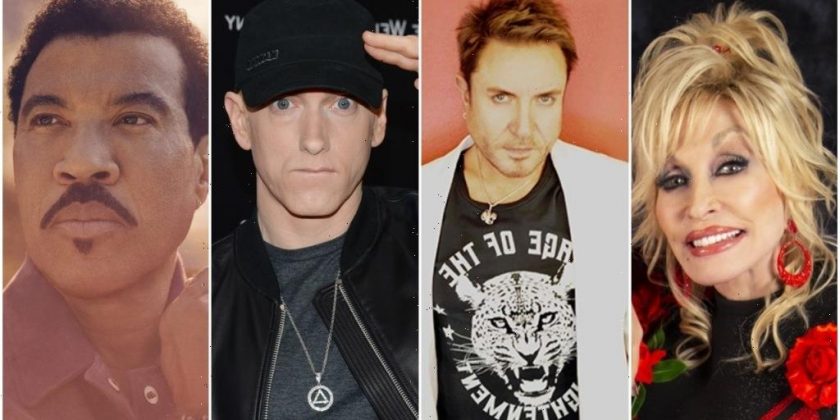 Well, Dolly Parton didn’t get her wish. The country superstar will be inducted into the Rock and Roll Hall of Fame in November — a possibility she said last week she’d come to terms with and would “graciously” accept, after initially trying to get herself nixed  — along with Duran Duran, Pat Benatar, Eminem, Lionel Richie, Eurythmics and Carly Simon.

Those are the seven performers that the Hall’s thousand-plus voters chose. There are eight more getting in besides who were not included in the competition but were selected by the board for inclusion in other categories. These include the band Judas Priest, which was on the ballot this year but didn’t make the cut with voters; the Hall’s keepers decided the metal group was essential to include nonetheless. Also selected for enshrinement were producer-musicians Jimmy Jam and Terry Lewis, singers Harry Belafonte and Elizabeth Cotten, and executives Sylvia Robinson, Jimmy Iovine and Allen Grubman.

The 37th annual induction ceremony has also been given a city and a date. After the event took place in Cleveland last year, for 2022 it will move back to the Microsoft Theater in downtown Los Angeles, on Nov. 5.

Who didn’t make it, among the 17 nominees? With seven getting in via the vote (versus just six that were elected last year) and Judas Priest coming in the side door, the nine who will have to wait till at least next year for another shot are Beck, Devo, Dionne Warwick, A Tribe Called Quest, the MC5, Kate Bush, Rage Against the Machine, the New York Dolls and Fela Kuti.

The Hall pointed out that this is the first year that six women will be inducted, between Benatar, Parton, Simon and  Eurythmics’ Annie Lennox from the main ballot, plus Cotton and Robinson in additional categories.

The list of inductees, and the four categories in which they appear:

Of the seven artists who were voted in in the performer category, five were appearing on the ballot for the first time: Parton, Richie, Simon, Duran Duran and Eminem. Four of those five had been eligible for years (the requirement is having released a major record 25 years ago or more). Only Eminem got in during his first year of eligibility. For Eurythmics and Benatar, it was the second time on the ballot for both; Benatar had her first shot as a nominee two years ago, and Lennox and Dave Stewart were previously up for it in 2018.

“This diverse group of inductees each had a profound impact on the sound of youth culture and helped change the course of rock ‘n roll,” John Sykes, chairman of the Rock & Roll Hall of Fame, said in a statement. “Their music moved generations and influenced so many artists that followed.”

Parton had focused much more attention on the Hall’s voting process than it had probably ever gotten before, when she announced shortly after ballots went out that she was removing herself from consideration, feeling that she was not enough of a true rocker to deserve getting in. The Hall soon thereafter released a statement saying that her name was staying on the ballot regardless. On Friday, Parton appeared on NPR and, when asked what she would do if she prevailed in the voting, said that she would “graciously” accept. Parton indicated that she did not realize at the time she made her earlier statement that there are plenty of other inductees already in the Hall who are identified primarily with non-rock genres.

Voters clearly thought differently than she did about whether Parton belongs. Still, there were many members of the media and public who sided with the country superstar in her initial objection, and the inclusion of her and Richie, among others, will no doubt reignite a popular debate about whether the Rock Hall casts too wide a net in bringing in legends from rock-adjacent genres or whether they, too, represent the spirit of rock ‘n’ roll. The class of 2022 will be remembered, as Sykes says, for its diversity… even as some rock fans will surely point out that it does not include any “classic rock” acts from the 1970s or earlier, aside from Judas Priest, which began releasing albums in the mid-’70s but really became a superstar act in the ’80s.

A fan vote was again held this year, and the five top vote-getters among the general public are among the seven that were selected by the Hall’s invite-only votership. Duran Duran easily prevailed among the public, with 934,880 votes. The British new wave band was followed by Eminem with 684,827 votes, Pat Banatar with 631,299, Eurythmics with 442,271 and Parton with 393,796. (The fan vote is primarily symbolic, with little impact on the outcome, since the entire collective vote only adds up to one industry ballot, or less than one-one-thousandth of the total.)

Judas Priest was on the general ballot for a third time this year without prevailing among voters. The group was included instead under the category of “musical excellence” — reminiscent of how repeat nominees LL Cool J and Kraftwerk were inducted last year, in the categories of musical excellence and early influences, respectively. In all three cases, it would seem that the Hall’s keepers decided that these artists deserved inclusion as key artists in genres that may be underrepresented in the Hall. In Judas Priest’s case, that would be metal, whose fans have lamented that the nominating committee and/or general voters are disinclined toward the genre.

Actor, singer and humanitarian activist Belafonte is the oldest incoming inductee into the hall, at age 95. This year, the only two incoming members who are no longer living are Cotten, a folk and blues singer-guitarist who died in 1987, when she was 94, and Robinson, an artist-turned-executive who died in 2011 at age 76.

Robinson is being celebrated as a pioneering Black woman executive, characterized in the Hall’s announcement as “the original hip-hop mogul (who) laid the foundation for rap to flourish into the most lucrative music genre today.” Decades after having a hit as part of Mickey & Sylvia with “Love Is Strange,” she became the founder and CEO of Sugar Hill Records, overseeing the ascent of seminal hip-hop acts the Sugarhill Gang and Grandmaster Flash and the Furious Five.

Grubman is an entertainment lawyer and one of the founders of the Hall of Fame. He has often been cited as one of the most powerful attorneys in the business, in a career that stretches back to the 1960s and has included representing such clients as Madonna, Bruce Springsteen, Mariah Carey, U2, Lady Gaga and Elton John. The announcement from the Hall of Fame describes him as “rock & roll’s master dealmaker.”

Iovine is a former producer and engineer who founded Interscope Records and co-founded Beats, and whose name has most recently been tied to a graduate program at USC.

As is customary, the Nov. 5 ceremony in L.A. will not be simulcast live. A recording of the show will air at a later date on HBO, on HBO Max for streaming, and on SiriusXM’s Rock & Roll Hall of Fame Radio channel 310 and SiriusXM’s Volume channel 106.