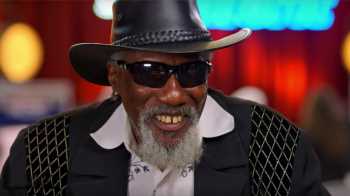 “America’s Got Talent” contestant Robert Finley, a 65-year-old, legally blind soul singer, wowed all four judges on the NBC show’s July 9 auditions episode. Performing his original song, “Get it While You Can,” the singer earned an easy four “yes” votes from Simon Cowell, Julianne Hough, Gabrielle Union and Howie Mandel, to take him to the next round.

A Louisiana native, Finley gave up music to serve in the Vietnam War and later took up work as a carpenter to support his family. A few years ago, he learned he was going blind from glaucoma, but maintains a positive attitude, explaining in his interview package that the bad news “brings out the best in you.”

Said Finley: “I began to play music again, it made me reach inside to find myself. It’s like I’m 65 and just coming alive.”

Right before his performance, Cowell noted that he sensed Finley had a good “soul.” Indeed, almost immediately, Finley had the crowd on its feet as his deep vocals belted the lyrics, “You got to get it when you can take it / Get it while you can / Wrap it up in bacon, sizzle it in your pan!”

Astute viewers quickly learned that Finley was a featured performer on Black Keys’ Dan Auerbach’s Easy Eye Sound Review tour in 2017. “Get it While You Can” is available on the Auerbach produced disc, “Goin’ Platinum,” on the Easy Eye label. Prior to that, Finley released the aptly named album “Age Don’t Mean a Thing,” which featured his soul-drenched vocals and musical flavorings influenced by B.B. King and Booker T and the MGs.

Finley predicted that Cowell would love him — and he was right.

“The finest wines are the ones that stay in storage for a few years and then they become beautiful,” said the British creator of the “Got Talent” franchise. “And that’s how I feel about your voice — you don’t have that voice when you’re 17, 20 years old.”

Watch the performance below: