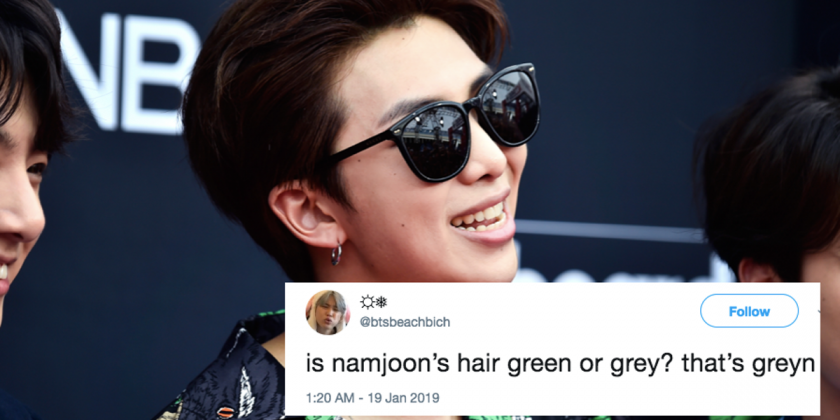 You can usually count on world renowned K-pop group BTS for a few things: mind-blowing performances, incredible music, and constant hair color changes. BTS boys will switch up their hair colors multiple times during the same tour and surprise fans who didn’t expect the change or who had just witnessed the boys perform with different hair colors. RM, also commonly referred to by his full name, Namjoon, followed this pattern of surprise and arrived at the BTS concert in Singapore this weekend with a new ‘do that fans can’t quite figure out. It’s safe to say that RM From BTS’ new hair color in Singapore is definitely playing tricks on fans’ eyes!

On Saturday, Jan. 19, BTS performed a three hour concert at the National Stadium in Singapore as part of the "Love Yourself" World Tour. During the concert, RM debuted a hair color that has fans confused. Some people like Twitter user @taeforguk tweeted that RM has green hair while others were opposed to this analysis, like Twitter user @genrejin who tweeted, "Why are people saying that [N]amjoon’s hair is green in pretty sure it’s grey????? maybe a little green tinted but it’s still grey." And Twitter user @jubilanttae wrote, plain and simple, "Ok [N]amjoon does not have green hair."

Though some people have firmly picked a side in the green or grey-slash-silver debate, most of the ARMY is just confused and looking for evidence one way or another. I smell the next blue or gold dress or Yanny or Laurel situation!

You can get another look at RM’s hair change at around the 11-second mark, as you see him in the background of Jimin performing his solo track, "Promise."

While there’s no real consensus of what RM’s new hue on his locks is, it definitely is a change to a lighter color.

Though his current ‘do may be more of an optical illusion than an actual color, RM’s other recent hair escapades are a little easier to discern. Two weeks ago, the performer revealed a multi-colored look with blue and blonde hair. Needless to say fans freaked out and compared the look to "clouds" and "moon dust." Back in December 2018, the singer dyed his hair white like he had back in 2014 which made the ARMY feel super nostalgic. At the Melon Music Awards on Dec. 1, RM performed with purple locks, which some fans even called their favorite hair color on him. According to a comprehensive BTS hair color timeline created by Reddit user queenpeartato, RM has also sported colors link pink, teal, navy blue, black, and brown over the years. That’s a lot of hair dye!

RM’s hair wasn’t the only talk of the Singapore concert. Fellow band member Jimin performed his dreamy new single, "Promise," for the crowd — and fans went wild. RM, who helped Jimin write the song, stood behind him with his pinkies linked, representing the idea of making a promise to love yourself. Twitter user @3shells1991 posted a video of Jimin’s performance, writing, "THIS MUST BE WHAT HEAVEN SOUNDS LIKE," and Twitter user @kthrivia shared what everyone was thinking with her tweet, "[J]imin singing promise made my entire 2019."

Hair color is an important part of the BTS image, but at the end of the day nothing can beat the boys’ hard work and performances or the way they make fans feel. RM’s hair might be an optical illusion, but ARMYs’ love for him is definitely not!