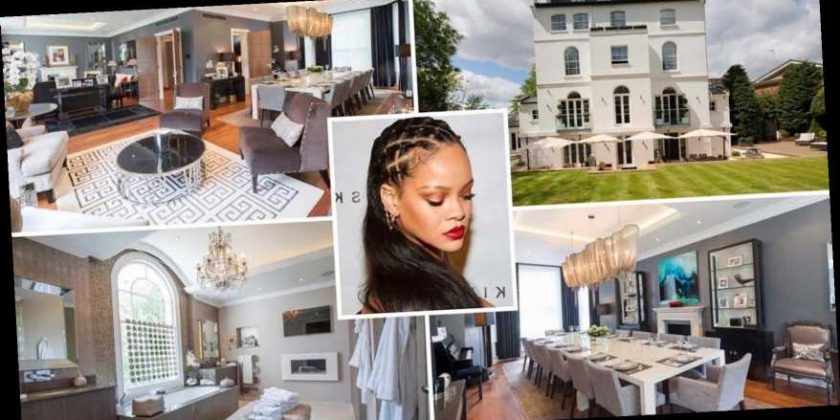 Rihanna’s London home, which the pop diva has been renting for nearly $24,000 a week since 2018, is being sold for $41 million. The North London mansion, once owned by De Beers diamond tycoon Daniel Francis, is an eight-bedroom house in the exclusive St. John’s Wood district that was designed by royal architect John Shaw and built in the 19th century.

Covering 6,332 square feet, the singer’s home includes a gym, private elevator and cinema room. The property also boasts parking for 10 cars. According to Michael Sulkin, a realtor for Aston Chase, the Diamonds singer rented the mansion because it afforded her complete privacy. In fact, no one knew of the home’s existence until fans spotted a bag from a local supermarket in one of Rihanna’s Instagram stories last year.

The mansion, which is being sold with all furnishings included, also features two floors for entertaining, a 12-seat dining area, twin balconies, a steam shower, an infrared sauna. and a lush garden. In London, Rihanna’s life was pretty low-key. “She was there for quite a long time — I don’t think most people even knew she was living there,” Sulkin told CNN.”It’s a very unique house — it’s quite something.”

During the coronavirus pandemic, Rihanna has reportedly been staying in the Hamptons in New York. The singer spent $415,000 to rent a cottage in the beachside community from mid-July to mid-August. She also paid a $1 million a security deposit. The home located on two acres overlooking the North Sea Harbor in Southampton includes a heated pool, private beach, and 85-foot dock.

Last year, the singer launched Fenty, a clothing and accessories brand under luxury group LVMH, becoming the first woman to have their own brand with the iconic fashion house. Launched in a pop-up store on May 22, 2019, in Paris, the brand debuted worldwide online on May 29. In December 2019, Rihanna mentioned that her new album was finished but that release was on hold. Her last album, Anti, which included the single “Bitch Better Have My Money,” was released in 2016.

READ NEXT: 10 Things Rihanna Does To Achieve Success