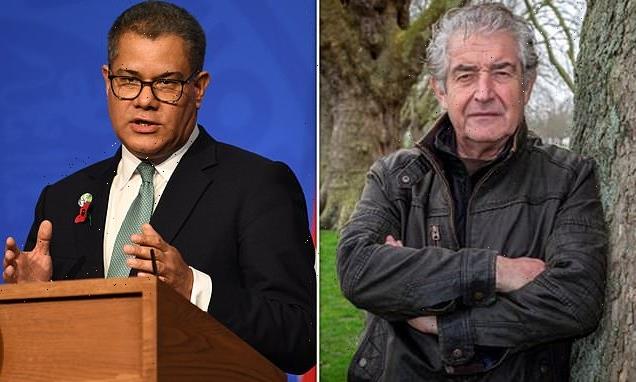 RICHARD LITTLEJOHN: Why are we giving a Friend of the Earth a small fortune to slag us all off and demand that we pay more in tax?

Tony Juniper? Ring any bells? Thought not. Me neither. I did wonder if he was the brother of Donovan’s Jennifer Juniper, who lives upon a hill.

Apparently not. Until yesterday, I’d never heard of him. Turns out he’s the chairman (sorry, ‘chair’) of something called Natural England, which pays him the thick end of £175,000 a year. Or, rather, we do. Nice work if you can get it. And you can get it if you subscribe to all the shibboleths, superstitions and self-regarding claptrap of the Guardianista quangocracy.

Before he became the grandest of fromages at the taxpayer-funded body set up to protect the countryside, Tony was a director of Friends of the Earth. 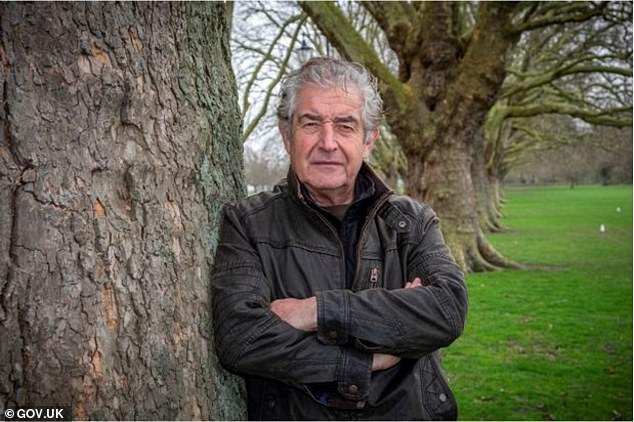 Tony Juniper (pictured) is the chair of Natural England, which pays him the thick end of £175,000 a year

Of course he was. Somehow, I wasn’t surprised to discover his CV didn’t include open-cast coal mining, fracking or seal-clubbing. Nor, I would venture, does his definition of protecting the countryside run to sticking up for fox-hunting, pheasant-shooting or hare-coursing.

Or taking out a lifetime’s subscription to Her Majesty’s Daily Telegraph, spiritual home of Sir Bufton Tufton and Disgusted of Tunbridge Wells.

So it was curious that the publication Juniper chose to grant an interview was the Torygraph, perfectly timed to coincide with the end of the farcical Cop26 jolly-up.

And guess what? His solution for saving the planet revolves around higher taxes, bigger fines and more expensive food and water. You don’t say.

Like the vast majority of the self-righteous, gas-guzzling junketeers in Glasgow, Tone is convinced that the greatest threat to the planet is, er, us — the mug punters who pay his inflated wages.

The Scum of the Earth, that’s how they see us.

We’re responsible for ‘the mass extinction of plants and animals, principally driven by our food system’. So we must be punished, through higher bills for everything from basic utilities to steak and chips, what Tony calls euphemistically ‘ecological taxation’.

All we’ve heard over the past couple of weeks is a torrent of abuse about how we — not them, obviously — are responsible for genocide, starvation, drought, hurricanes, tsunamis, boils, etc. 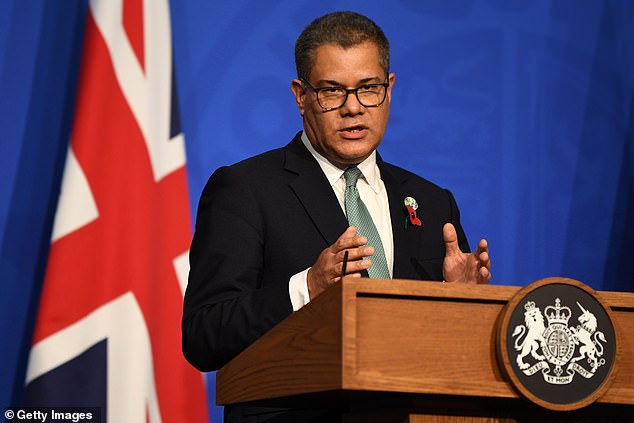 ‘Look at climate minister Alok Sharma (pictured) ‘holding back the tears’ because India and China wouldn’t sign up to his pie-in-the-sky plans to make them scrap coal-fired power stations. He should be ashamed of himse’, writes RICHARD LITTLEJOHN

I’m sorry, I’ll just read that again. Have you ever met anybody who speaks like that? It’s Flob-a-Dob.

Yet the technocratic classes think that if they spout pure, undiluted Flowerpot Man, they can blind us with science into feeling guilty for everything. Sorry, guv, but I’m not buying any of it. Not until the self-appointed saviours of the planet start making the same sacrifices they demand of the rest of us.

The ocean-going, ozone-busting hypocrisy of the Cop26 delegates has already been well documented — everything from Joe Biden’s Mad Max-style motorcade to Boris’s private jet back to London, and Jeff Bezos’s ridiculous space rocket.

Why, for instance, are we paying Tony Juniper, the boss of Natural England, 175 grand a year? And, I’m guessing, a company car and all the usual ‘emoluments’, including business class air fares, as basis for negotiation. Clarkson’s tractor driver Kaleb would have done it for a fifth of that — and he’d be better qualified.

‘There is a deficiency in the way we do economics, insofar as we can’t see the downsides of things which are basically hidden from the numbers that appear in the prices.’

Precisely. Why are we giving a Friend of the Earth a small fortune to slag us all off and demand that we pay more in tax?

Still, that’s the way of the world. After 11 years of allegedly Tory government, the country is still run by wall-to-wall Guardianistas nobody voted for.

Even the Tories themselves have gone native, buying in to the Leftist drivel which passes for public policy. Here’s a selection of stories from the weekend papers, apropos of nothing.

Free sanitary towels in gents’ toilets in Scotland. (That’s another one of those sentences I thought I’d never read, let alone write.) A review of the rights of ‘trans rapists’ to be housed in female prisons. The Home Office ordering staff to celebrate ‘Trans Parents’ Day’. Durham University offering training in how to be a ‘sex worker’.

Most of you have been reading this column long enough to know I’m intrinsically libertarian. Live and let live, and all that.

But there’s nothing libertarian about the new, rigorously-enforced orthodoxy of woke bigotry. Get with the programme, or it’s game over. Politicians, so-called Conservative politicians even, have taken leave of their senses trying to keep up.

Look at climate minister Alok Sharma ‘holding back the tears’ because India and China wouldn’t sign up to his pie-in-the-sky plans to make them scrap coal-fired power stations. He should be ashamed of himself.

Sharma is 54 years old, for heaven’s sake, university educated, a high-flying accountant before he went into politics. Does he really think bawling his eyes out in public is a proper way to behave?

Of course he doesn’t. But this is the way to get on these days. Bogus emoting trumps rationality. Gesture politics is the name of the game, even if that means screwing royally the people you are paid to represent.

Oh, and by the way, chaps. As Rab C. Nesbitt always says, we may be scum to you, but we’re the creme de la scum.

And don’t you forget it, boy!

The Church of England is disappearing up its own fundament. Just days ago, the Archbishop of Canterbury had to apologise for comparing climate change to the Holocaust.

What the hell, if you’ll pardon the expression, was he thinking? And they wonder why hardly anybody bothers turning up at church of a Sunday morning.

A few years ago, trendy vicars resorted to tambourines and Casio organs in a bid to get down wid da kidz. 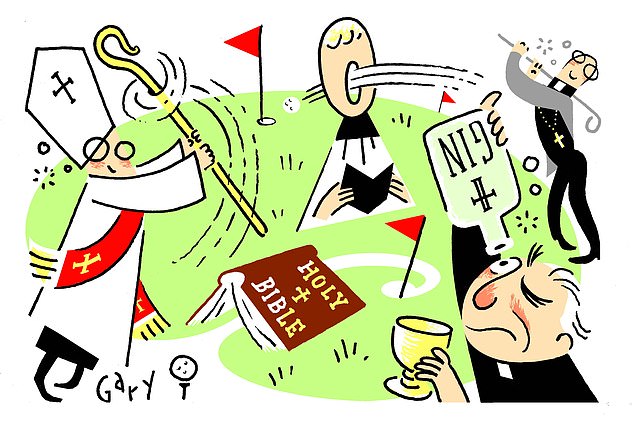 Out went Dear Lord And Father Of Mankind, in came Morning Has Broken and Pass The Duchy From The Left Hand Side. Rochester Cathedral in Kent, down the road from Canterbury, even set up a nine-hole crazy golf course in the nave to try to pull in the punters.

Who thought that was a good idea? And you join us at the Rochester Open, where Rory has just taken four at the vestry . . .

Now the same cathedral, in desperation, has launched its own home-made brand of gin. Beats the wossname out of holy water, I guess.

It’s treble’s all round for Keithy

Apostrophes are dying out because of social media. Dear old Keith Waterhouse, late of this parish, would have been horrified.

Keithy invented the AAAA, the Association for the Abolition of the Aberrant Apostrophe, based in Clogthorpe. 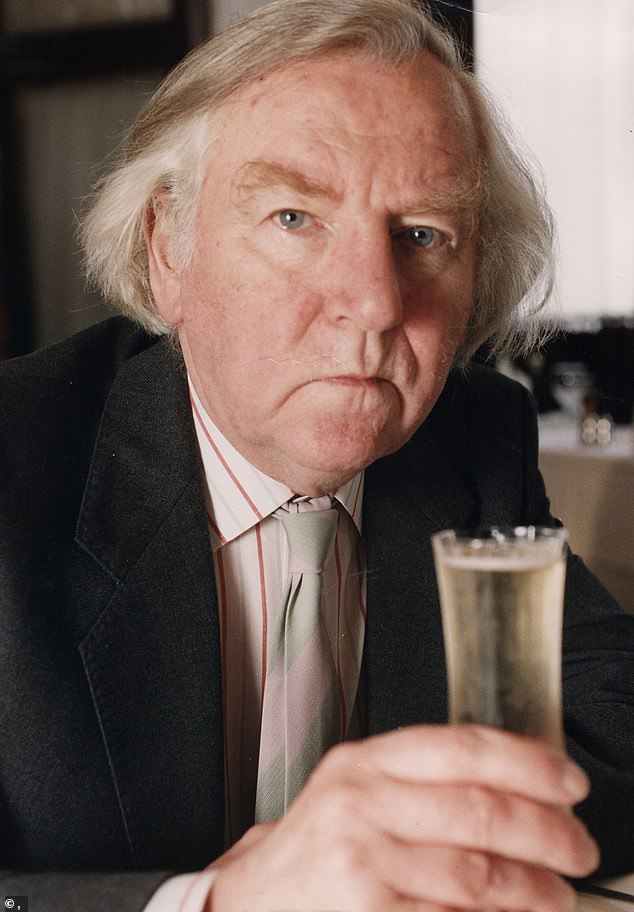 The late Keith Waterhouse (pictured) who passed away on September 4, 2009

This aberration was responsible for displays of tomatoe’s, potatoe’s and plum’s on market stalls the length and breadth of Britain.

Waterho, who died in 2009, had no time for the internet but would have turned up to the apostrophe’s funeral, provided it was held at St Bride’s (with appropriate apostrophe) in Fleet Street, followed by a thirsty wake at El Vino wine bar — not El Vino’s, as commonly misconstrued.

It’s what he would have wanted!