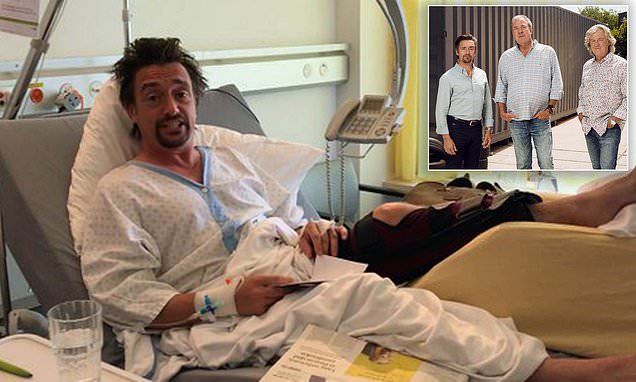 ‘I was shaking from head to foot. I wasn’t acting. I was terrified’: Has The Grand Tour’s accident-prone Richard Hammond learned his lesson? A look at him driving a truck over a rickety Colombian bridge will tell you: No!

You have to wonder when Richard Hammond will learn his lesson. It is just over a year since he was airlifted to hospital after torching an electric supercar in Switzerland for a televised stunt. Yet here he is in the new season of The Grand Tour, once more dicing with jeopardy. In one scene he is filmed in the Colombian rainforest attempting to negotiate a rickety wooden bridge strung across a canyon while at the wheel of a truck that’s way too big for such a manoeuvre. When the truck stalls, the quivering panic emanating from the cabin is not remotely fictitious. This is the sight and sound of a man in fear for his life.

‘Oh, that sodding bridge,’ Hammond says when reminded of his escapade. ‘If you look, I’m shaking from head to foot. I was not acting. I was absolutely c****ing myself.’ 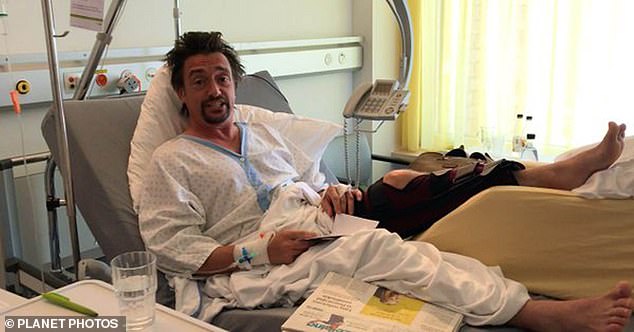 Hammond in hospital in 2017. ‘I’m not the favourite of our insurers,’ he says dryly. ‘I have cost them a penny or two over the years’

Hammond seems to have an uncanny ability to cheat death, most spectacularly back in 2006 when he crashed a Vampire dragster at 288mph and ended up in a coma for two weeks. ‘I’m not the favourite of our insurers,’ he says dryly. ‘I have cost them a penny or two over the years. After the last crash one of my first thoughts was: “Oh God, how am I ever going to live this down?”’

So why does he insist on being filmed sitting in a truck perched on a dodgy bridge 40ft above a raging torrent? ‘It’s what I do,’ he says, by way of explanation. ‘Look, I’m not gung-ho. I’m the opposite. Before I set off, I want to be assured that it won’t go wrong. I’m not crazy. I’ve got a wife and two beautiful daughters and I want to be around for them. I don’t want to throw it away. My family is my life, I don’t want to spoil their futures by accidentally exiting stage left.’

Are his family quite as happy about him continuing to put himself in mortal danger for a television programme? ‘Yeah, they are. They’ve never asked me to stop,’ he says, before pausing for a moment. ‘That’s a bit worrying isn’t it?’ Which is a typical Hammond response: this is not a man given to serious reflection. 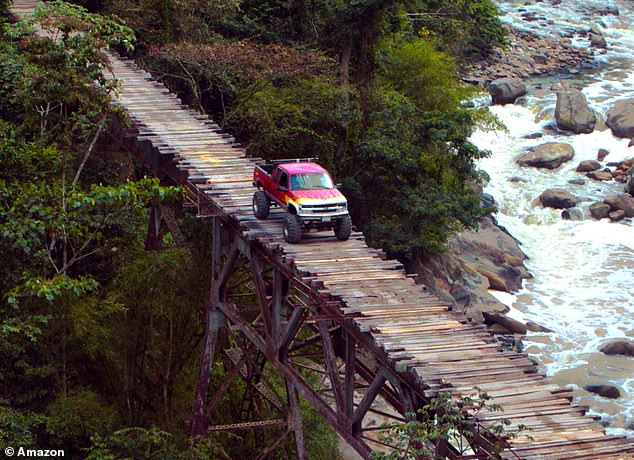 In the company of his confrères Jeremy Clarkson and James May, Hammond has been messing about in cars for 17 years. First on Top Gear, now on Amazon’s Grand Tour, the three of them have been engaged in a relentless round of laddish dares and giggling put-downs. It’s like they have spent the past decade-and-a-half on a permanent stag weekend. But as the new series becomes available on Amazon Prime, Clarkson revealed that this will be the last one in this format. ‘It’s the end of an era,’ said Clarkson. ‘There are only so many times you can watch a BMW go around a track. We all agreed that we’ve been doing this a long time and everything eventually runs its course.’

After this series, the trio will concentrate solely on the expensively filmed travelogue elements, like the three specials this time around, shot in Mongolia, Colombia and Nevada.

‘It will be those bits that people love, the grand adventures,’ says Hammond. ‘It will still be the sociology of cars, still about us three goofballs bickering. But it is what people told us they wanted.’

It might come as a surprise that people are still offering an opinion. When the trio were on Top Gear their Sunday-night shows invariably fuelled Monday morning’s water-cooler moments. But since they moved from the BBC to Amazon, there is no doubt they have drifted from the centre of the national conversation. Hammond, though, defends their new road.

‘Television’s consumed in a very different way now,’ he says. ‘My daughters would find it a hilarious idea to go home and switch on the telly to watch what someone else has decided they should watch. People choose.’

Does he know how many people are watching The Grand Tour? ‘Amazon don’t release the figures, even to us. The fact they have signed us up for two more series suggests we’re drawing people in. They’re not stupid and it’s not cheap to make.’ 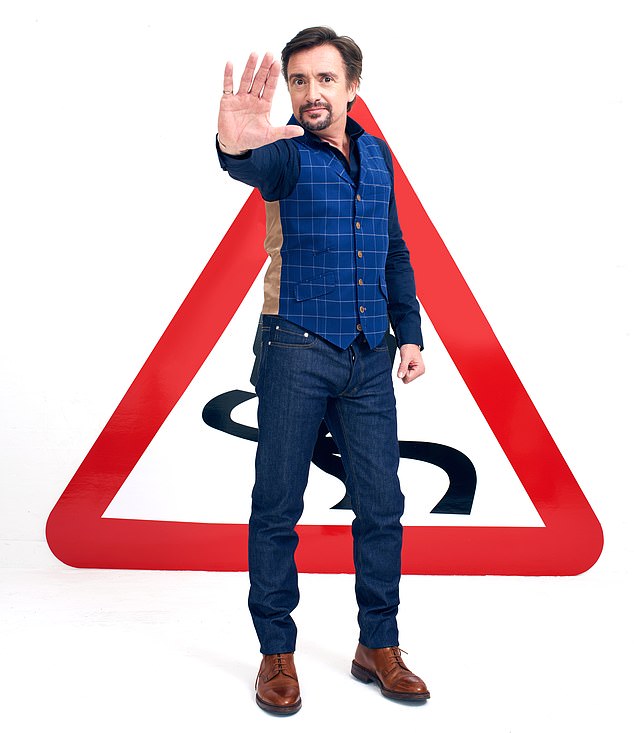 In the company of his confrères Jeremy Clarkson and James May, Hammond has been messing about in cars for 17 years

Indeed it’s not. While Top Gear’s budget was around £450,000 an episode, The Grand Tour is rumoured to cost more than £4.5 million for each hour of TV.

The BBC has struggled to maintain the format they left behind. While in Hammond’s day the audience was regularly over seven million, the last series of Top Gear slipped below three million. There have been constant changes to the presenting line-up. After Chris Evans and Matt LeBlanc, the latest attempt to inject some oomph is to recruit cricketer Andrew Flintoff as presenter of the series after next.

Hammond won’t comment on the new opposition, but he is sure about what made the programme sing in his day: the chemistry between its presenters. ‘It was there from the get-go,’ he says. ‘You can’t manufacturer it. Or hope to cast it. It happens by chance. That’s it.’

What is critical, he adds, is a love of the subject matter.

‘That cannot be feigned. What we do has always been rooted in our shared love of cars. All I thought about from the age of five was counting off the days until I could drive. The fact is, it’s three car obsessives talking about something we love.

‘You can’t set off and hope something happens, so we have to go with enough of a plan,’ he says. ‘But beyond that what makes the film is what happens in between. That’s what makes people watch.’

In the 17 years they have been messing about in cars, sensibilities have changed, broadcasting politics moved on. You wonder how long, in the era of growing inclusivity, three middle-aged, politically incorrect white blokes (Hammond is 49, May 55, and Clarkson 58) can continue to occupy the screen? ‘I can’t see why we have to stop,’ Hammond says. ‘I’m all for TV being inclusive and representative and I agree it’s really important people can switch on the telly and see someone like them on there. But I don’t think that will impact on us. There are loads of people out there who still identify with us.’ 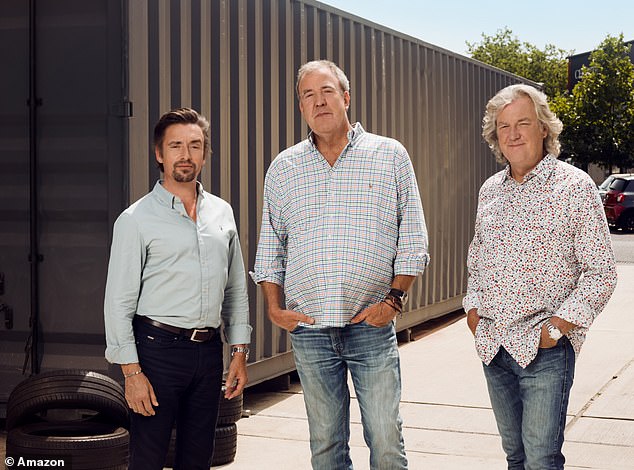 While Top Gear’s budget was around £450,000 an episode, The Grand Tour is rumoured to cost more than £4.5 million for each hour of TV

Nor does he think they will have to tone down their more robust opinions. Clarkson appears not to have been chastened by his eviction from the BBC. Everything remains game for a laugh. Though the closest to controversy the new format has provoked has been Hammond’s hint in the first series that eating ice cream might not be the most manly pursuit. A gag he has insisted was not remotely homophobic.

Hammond can see no reason not to keep on indefinitely doing the thing they all love, without in any way changing the way they do it. ‘I’m sure the day will come when one of us walks into shot and says: what am I doing here? But until then, we’ll carry on.’

‘The Grand Tour’ is available on Amazon Prime from January 18